Out Today : Spoon & Adrian Sherwood - 'Lucifer On The Moon' Spoon & Adrian Sherwood's 'Lucifer On The Moon' is available today in record shops and via all streaming services.

'Lucifer on the Moon' is the anti-gravity companion to Spoon’s 'Lucifer on the Sofa'. A top-to-bottom rework of the Austin band's tenth album, it was created by On-U Sound founder and UK dub icon, Adrian Sherwood..

'Moon' first took shape as a few heady remixes for the singles from 'Lucifer on the Sofa'. Frontman Britt Daniel offered Sherwood two suggestions: “Avoid things that would not be possible on tape” and “Add whatever you want to add, the less modern the better.” The collaboration shouldn't come as a surprise: dub-inspired production is wound through Spoon’s classic tracks, from "Finer Feelings" to "Inside Out."  The initial results pleased both parties and Sherwood was invited to work on additional songs. And then a few more. “I got into the melody and the thoughts it evoked in me,” the producer explains. “It just evolved and we eventually found ourselves with a whole album.”

The result airlifts Spoon’s trademark melodies into lush alien terrain, replete with vibrant echo and rumbling low-end. “It wasn’t just a thing where you pick apart this and that and you stay on the grid and you add a delay,” explains Daniel. “He added so much more instrumentation to the tracks that they became completely different versions of the songs. Not just remixes, but companion pieces. A ‘Part II.’”

We realize there's likely to be some sore feelings about Matador's decision to fully automate our mail order operations, but when we factored in the amount of time label ownership spent dealing with email complaints about bent corners, warped records or USPS going AWOL, it was time to make some bold moves.  And what move could be bolder than opting for the suave services of ACCUTRON 3000 and his not-nearly-as-polished sibling BROBOT 3000?  This dynamic duo are absolutely KILLING IT on the warehouse floor (and by "killing it", I mean Brobot 3000 might've actually killed someone --- we're still investigating) and we're very confident that as this holiday season approaches, your orders will be fulfilled quickly and competently and there's almost no chance whatsoever Brobot 3000 will threaten me with a box cutter ever again.   Think of Accutron 3000 as Gallant to Brobot 3000's Goofus.  Or the Noam to his Liam.  Or maybe the other way around.  I can't tell, this has been very stressful with all the threats.

To celebrate these 2 new additions to our team, we're offering 25% off nearly everything at the Matador Store (preorders and Queens Of The Stone Age reissues excepted) when you use the code "AUTOMATON" at check out.
The sale ends November 22 (or whenever the SWAT team is called to deal with Brobot 3000, whichever comes first). 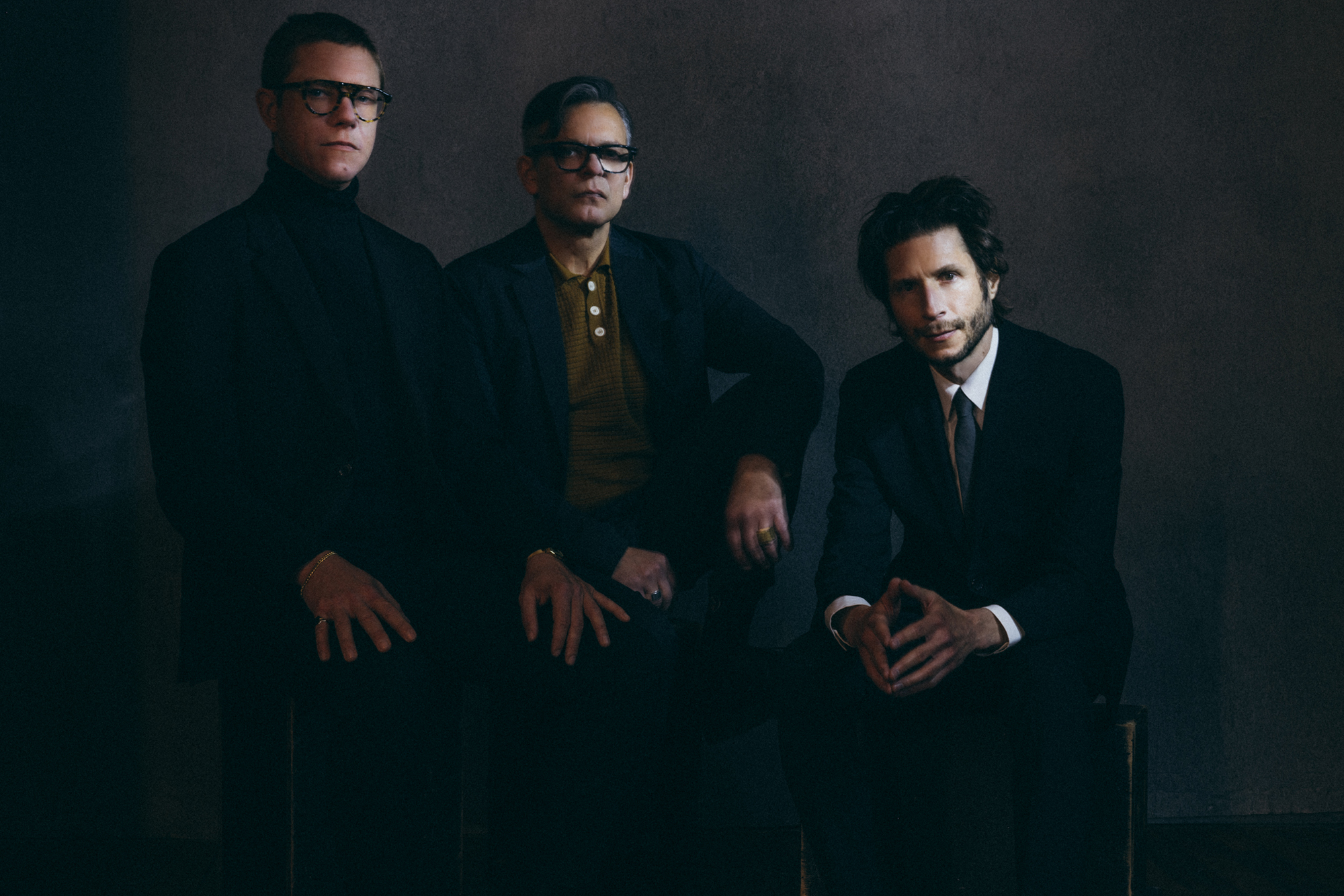 Stream / Purchase The Other Side of Make-Believe

Interpol have shared a new video for ‘Passenger’, one of the highlights from this year's The Other Side of Make-Believe. The video came to be unexpectedly – longstanding Interpol fan Jamie McDonald had been experimenting with animation and produced the video on their own, feeling a special connection with the song. After uploading it to one of Interpol’s social pages, the video came to the attention of the band who loved it and asked if they could use it as an official video.

Director Jamie McDonald says: "Passenger spoke to me. As soon as I listened to it, I was inspired. The idea behind the music video visually, is that of a fever dream. We're exploring the subconscious, delving into dreams, and delving even deeper into nightmares. This is really a passion project for me." 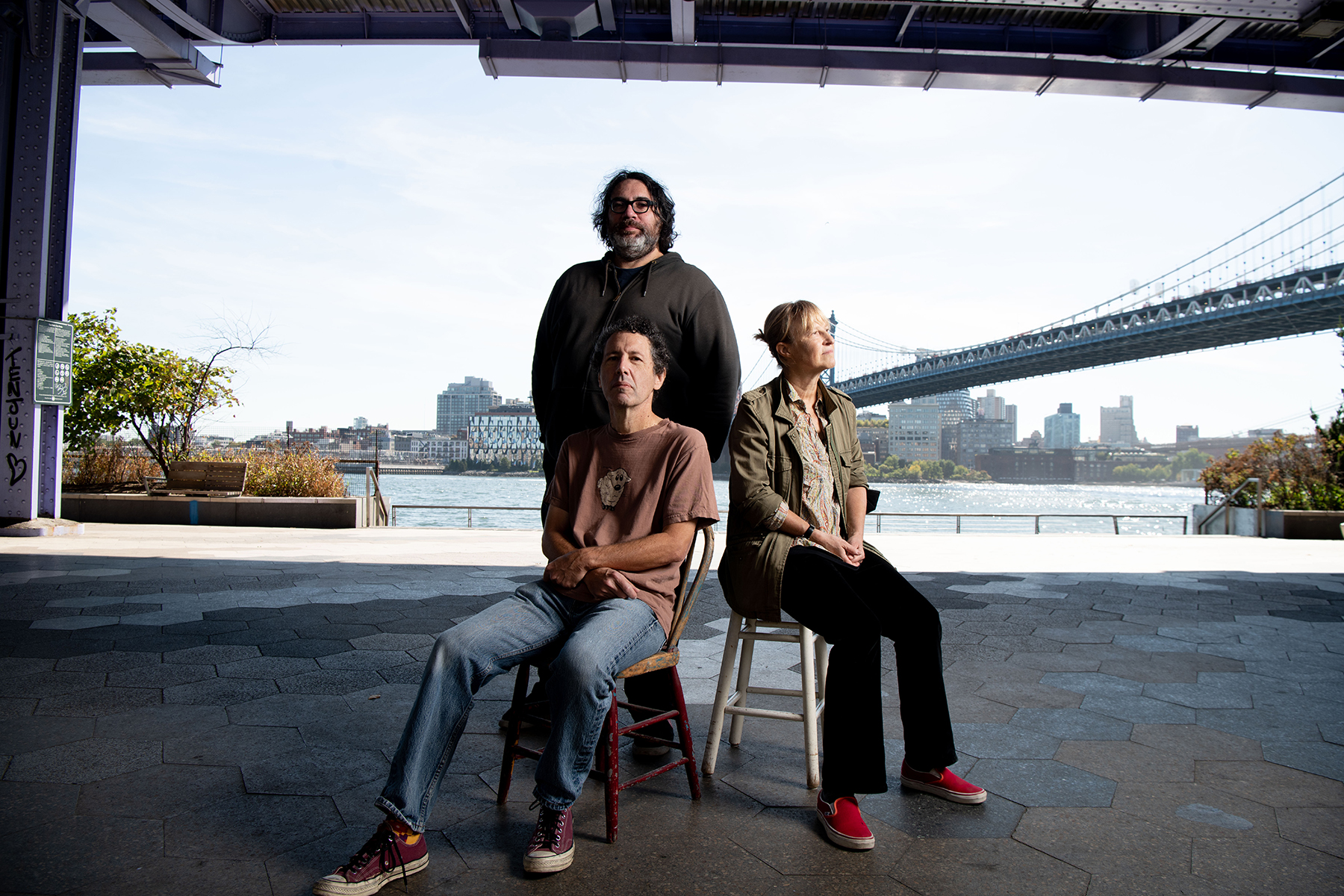 Today we bring you the indisputably excellent news that on February 10 Matador will release 'This Stupid World', the sixteenth album by Yo La Tengo.

In December, the band will return to Bowery Ballroom for their annual eight-night Hanukkah concert series. Early 2023, Yo La Tengo will hit the road on a wide-ranging tour of the US, UK, and Europe.

Time keeps moving and things keep changing, but that doesn’t mean we can't fight back. Yo La Tengo have raced time for nearly four decades and, to my ears, they just keep winning. The trio’s latest victory is called 'This Stupid World', a spellbinding set of reflective songs that resist the ticking clock. This music is not so much timeless as time- defiant. “I want to fall out of time,” Ira Kaplan sings in “Fallout.” “Reach back, unwind.”

Part of how Kaplan, Georgia Hubley, and James McNew escape time is by watching it pass, even accepting it when they must. “I see clearly how it ends / I see the moon rise as the sun descends,” they sing during opener “Sinatra Drive Breakdown.” In the séance-like "Until it Happens,” Kaplan plainly intones, “Prepare to die / Prepare yourself while there’s still time.” But 'This Stupid World' is also filled with calls to reject time – bide
it, ignore it, waste it. "Stay alive," he adds later in the same song. "Look away from the hands of time.”

Of course, times have changed for Yo La Tengo as much as they have for everyone else. In the past, the band has often worked with outside producers and mixers. They made 'This Stupid World' all by themselves. And their time-tested judgment is both sturdy enough to keep things to the band’s high standards, and nimble enough to make things new.

Another new thing about 'This Stupid World' : it’s the most live-sounding Yo La Tengo album in years. At the base of nearly every track is the trio playing all at once, giving everything a right-now feel. Take the signature combination of hypnotic rhythm and spontaneous guitar on “Sinatra Drive Breakdown,” or the steady chug of “Tonight’s Episode,” a blinkered tunnel of forward-moving sound. There’s an immediacy to the music, as if the distance between the first pass and the final product has become more
direct.

The songs on 'This Stupid World 'are still journeys, though. An example is the absorbing, three-dimensional “Brain Capers.” To construct this swirl, the band blends guitar chords, bass loops, drum punches, and various iterations of Hubley and Kaplan's voices intoshifting layers. Simpler but just as dense is closer “Miles Away"; A dubby rhythm lurks
below Hubley’s vocal, which brushes across the song like paint leaving bright blurs.

Throughout the album, these touches, accents, and surprises intensify each piece. It’s ararity – a raw-sounding record that gives you plenty of headphone-worthy detail to chew  on.

'This Stupid World' also gives your brain a lot to digest. All these battles with time drive toward heavy conclusions. In the gripping “Aselestine,” Hubley sings about what sounds like a friend on death's door : “The clock won’t tick / I can’t predict / I can’t sell your books, though you asked me to.” In “Apology Letter,” time turns simple communication into something fraught and confusing: "The words / Derail on the way from me to you.”

Not everything is so serious, though. The absurdist “Tonight’s Episode"  helps McNew learn to milk cows, steal faces, and treat guacamole as a verb. And somehow Alice Cooper, Ray Davies, and Rick Moranis show up in “Brain Capers” — all telling us that time isn’t finished yet.

So I guess everyone on This Stupid World grapples with how time keeps steamrolling and how we keep trying to do something about it. It is there in the title, a defiant but clear-eyed declaration that suggests a will to fight, against the odds. It’s there in the title track too: “This stupid world – it’s killing me / This stupid world – is all we have.” Such realism leads to the resolute optimism of 'This Stupid World's parting shot, “Miles Away,”
which sees time’s passage and life'ss impermanence as things to deal with rather than reasons to despair. “You feel alone / Friends are all gone", Hubley sings softly. "Keep wiping the dust from your eyes.” -
Marc Masters 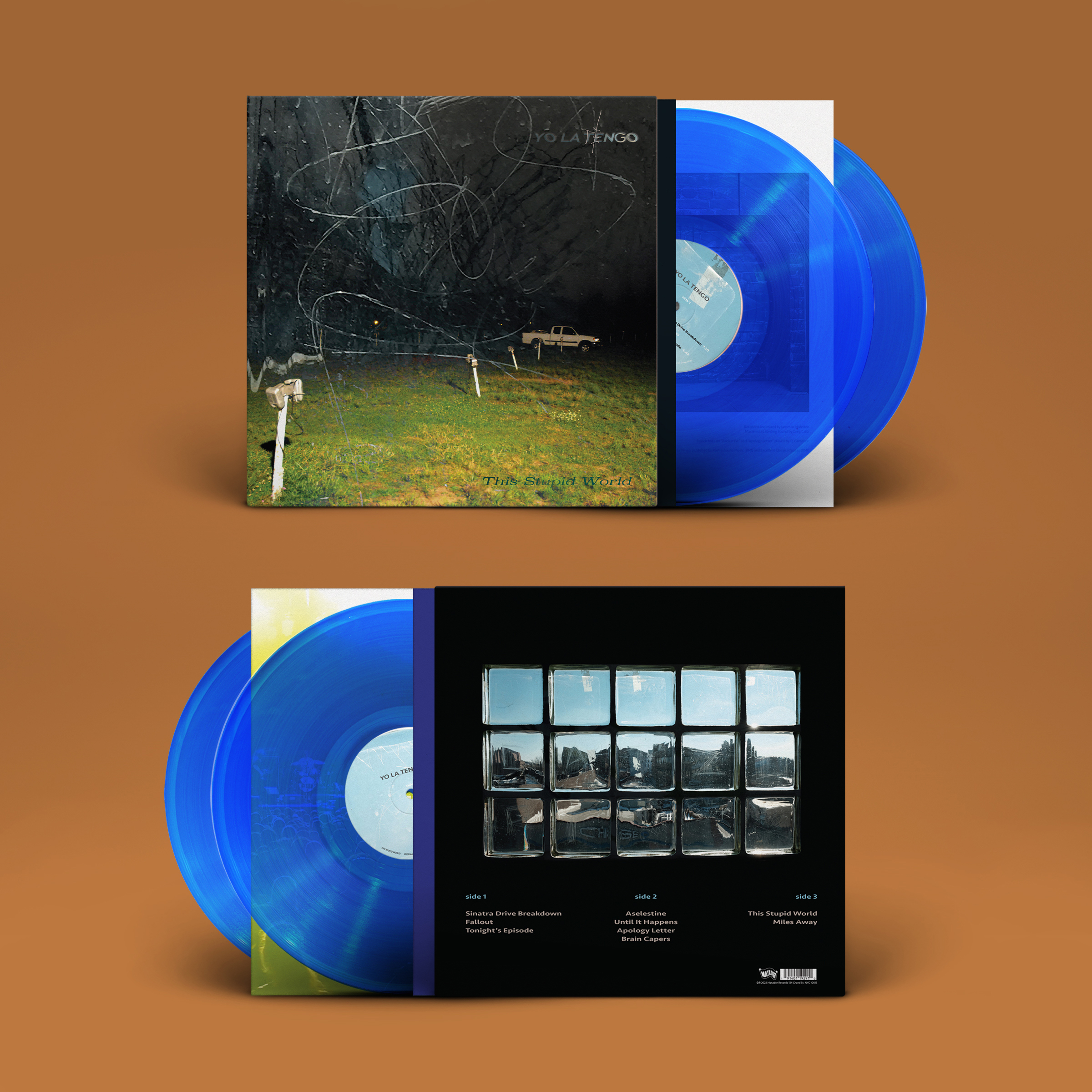 Yo La Tengo on Tour, New Dates In Bold On Sale Friday

Pre-order Lucifer on the Moon

Purchase / Stream Lucifer on the Sofa

Out Friday, Lucifer on the Moon is the anti-gravity companion to Spoon’s Lucifer on the Sofa. It’s a full-on reimagination of the Austin band's tenth album created by On-U Sound founder and UK dub icon, Adrian Sherwood.

Today, listen to “The Devil and Mr. Jones” (Rework), which twists the original song down to a head-spinning, half-time groove. 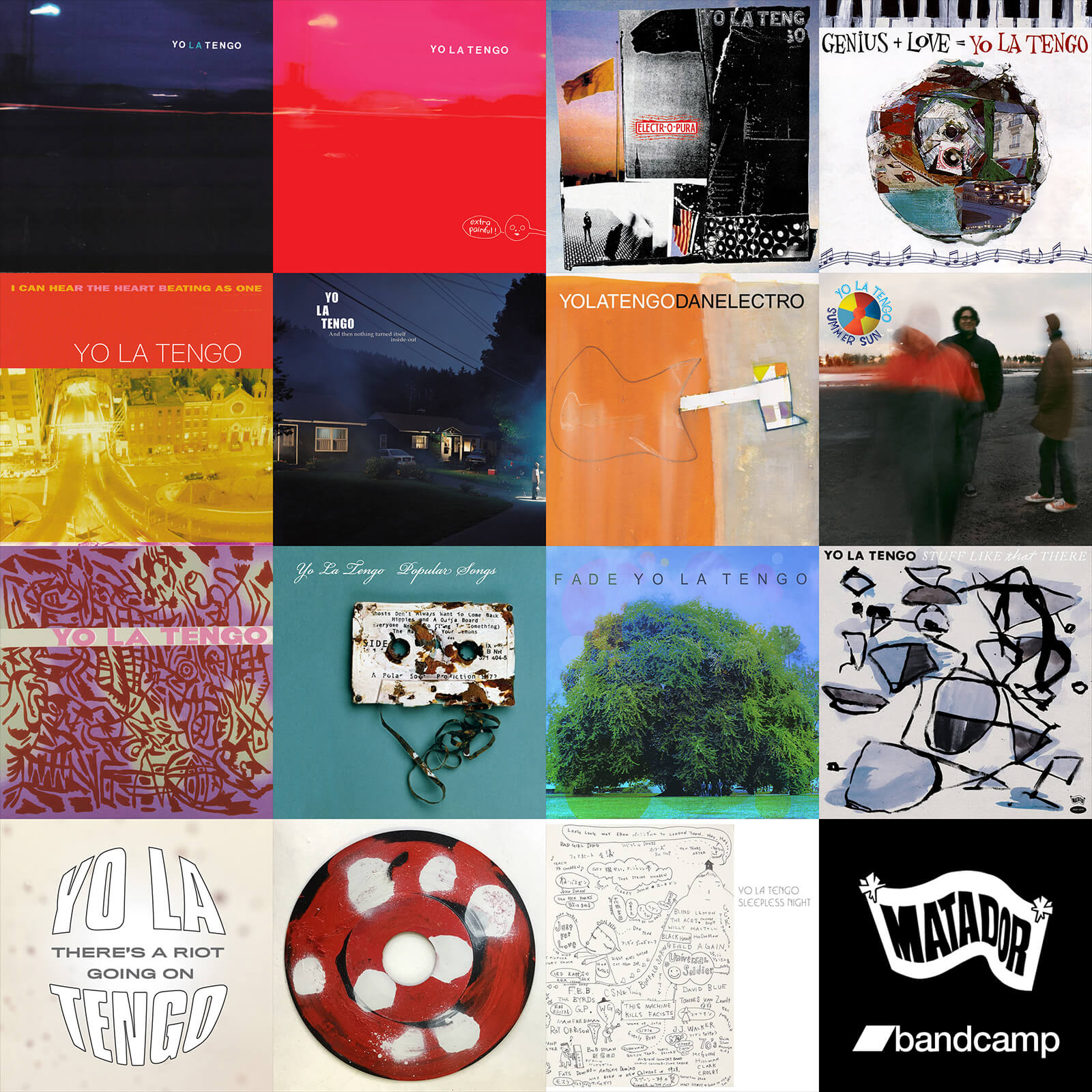 Yo La Tengo's entire Matador Records catalog is now available on Bandcamp starting today. This is significant for several reasons, not limited to this coming Friday (November 4) marking another day in which Bandcamp waives their revenue share (aka "Bandcamp Friday"). So if you're a big fan of Matador pocketing more money than usual, wait a few days.

We do realize this announcement will likely provoke replies asking when some other band's entire catalog will be available on Bandcamp and the answer to that question is most assuredly, "someday" or "maybe". Thank you.