What Do You Get For The Men Who Have Everything?

Nils and Zach both celebrated birthdays earlier this week and it seems the tasty Carvel cakes I shipped to each of them ended up melting in the lobby of 304 Hudson St. (something about how the cake didn't have proper ID for security).  Sorry, dudes.

That said, I was able to find the very next best thing in the entire world. Vintage footage of Siege rendering music, video and American flags done and dusted, back in the year 1984.   Don't bother sending me a thank you note --- I already know you're thrilled.

The New York Times' Jeremy W. Peters on the Garden State's most highly sought after seal-of-approval, that of Jon Bon Jovi. In New Jersey, it is practically a requirement for any high-ranking politician to attend at least one of his shows. And despite his left-leaning political allegiances, Democrats and Republicans alike seek him out as if he were New Jersey’s very own Bono.

When former Gov. Christie Whitman was deciding whether to build a sports arena in Camden, she consulted Mr. Bon Jovi — part owner of the Arena Football League team the Philadelphia Soul — and took his advice to pass it up. When Newark needed a marquee name to christen the Prudential Center, one of its most important new developments in decades, it turned to him.

“He basically says, ‘Hey, here’s where I’m from, like it or not,’ ” said Ms. Whitman, a Republican who later became administrator of the Environmental Protection Agency under President Bush. “And that’s refreshing for the state of New Jersey because we don’t have a lot of that.”

Yeah, I can't think of anyone else who might be identified with New Jersey. Disc Three: Live From The Future -- Band is approving, will be done by the second week of January

Disc Four: Photos, Videos -- The second video ("Myriad Harbour") will be delivered right after the holiday, and we have all the other materials, so this will be done by the third week of January

So there you go. Though future editions of BEGN will undoubtedly be less ambitious, we'll always have found memories of the version the LA Times hailed as "reasonably priced" and "delightful".

Though the excellent 3rd solo album from Arab Strap guitarist Malcom Middleton , 'A Brighter Beat' (Full Time Hobby) is getting a bit dusty, there's been an effort in the UK to push the single for "We're All Going To Die" to an improbable Xmas no. 1.

Based on the clip above, we hope he gets there. (video link courtesy Jesper) 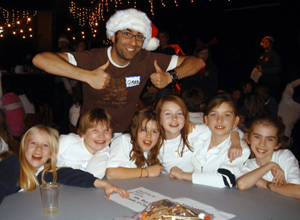 (Matador's annual Xmas party for Soon-To-Be-Abandoned Kids was once again, a huge hit)

Ok, the climatic update has just been posted and while most of it is most assuredly old-fuckin'-news for regular readers of the Matablog, we have, however, managed to collect year-end Top Top Tens (12's?  15's?) from an All-Star cast including Stuart Braithwaite, James McNew, Roger Miller, Jennifer O'Connor, Howard Draper, Luke Horton, Times New Viking and other close pals of The Record Co.   Enjoy...and if you're not checking your computer again until January 2, the staff, management and ownership of Matador wish you a very, very happy December 21st!

Amusing, Yeah, But They're Not Nearly As Good As The Special Moments 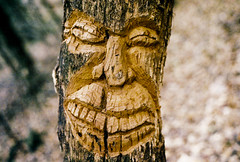 It's all over but the shouting for Shearwater's new album, 'Rook'. We recorded it in November at the Echo Lab in Argyle, Texas, among barred owls, pet donkeys, coyotes, and the ominous sounds of gas wells being drilled in the near distance; rural north Texas retreats as Dallas approaches. After a break for the holidays, we'll be mixing and mastering in early 08, with plenty of touring on the horizon. (For photos, click the Thor-carved dendroglyph above.)

If Anybody Was Wondering... 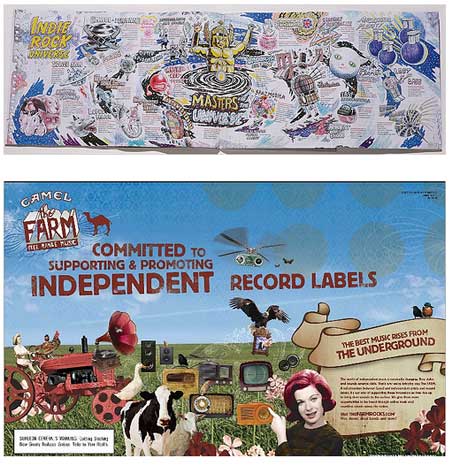 ...neither Matador Records nor any of our artists signed off on this particular bit of clumsy attempted co-opting.  But we're very pleased to see some of our favorite bands getting involved in setting the record straight and hopeful making future advertorial mavens think twice before pulling a similar stunt. After months of public speculation, late night phone calls and a fascinating thread on a bulletin board other than our own, we're pleased to announce Matador will be releasing six limited edition singles in 2008 by the wildly prolific Jay Reatard.

Manufactured quantities of each single will diminish with each successive release.  We've not figured out the exact scheme yet, but given our commitment to the customer-always-being-angry, rest assured the numbers will be lower than you'd like.

For those not nearly hung up on the collector skum scenery, all 6 7"'s will be compiled for a subsequent CD and LP release.

Jay's blog can be found here.  His myspace page, here.  We'll have some real info about this early in the new year.

Thanks to Adam Farrell for the link.

With full respect to all of the above, going forward, we might think of the fantastic new song by Stephen Malkmus & The Jicks, also entitled, "Baltimore" (mp3, taken from the forthcoming CD/LP 'Real Emotional Trash')

a) The Paris show takes place on Chan's birthday.
b) We don't have ticketing info available yet for either show.
c) 'Jukebox' is now available for pre-order (double CD, LP) 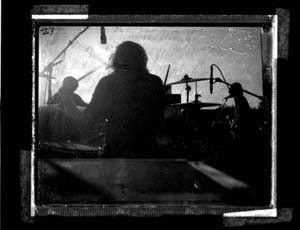 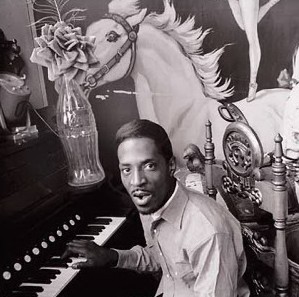 Kicking ass (the musical sort, hopefully) somewhere in the great beyond.  Good night, Ike Turner.  Sure, he might've beat the holy heck out of Angela Bassett Tina, but how many musical genres have you invented/re-shaped lately?

Mission Of Burma's mission for Burma

From our friends at Fenway Recordings :

Mission of Burma has teamed up with the US Campaign for Burma to put on a benefit concert for Burma on Jan 20th, with their friends The Neighborhoods and The In Out. The night will also include slides, images, video projection, and speakers about and from Burma.

It's all happening on January 20 at Allston, MA's Great Scott, and you can find tickets here.

The Tampa Bay Center For The Performing Arts' Jaeb Theatre, to be exact.  Wish we were there...and not merely because it's freezing here.

The subject of the previously touted "Abel Raises Cain" squares off in the above clip with chat-show host/producer Bill Boggs, long before this humble label got its hooks into the latter.

Contrary to popular belief, our armed forces are actually quite picky. (mp3)

I had the distinct pleasure of attending night no.1 of Yo La Tengo's annual (well, most years) Hanukkah residency at Maxwell's this past Tuesday. And while it was a terrific show --- including performances by Versus, Mark Arm (Mudhoney, Green River, Mr. Epp & The Calculations) and Jon Glaser/Jon Benjamin, I'm in genuine envy of those who managed to hit Wedneday and Thursday's performances (aided by The Clean and the dB's, respectively).

Suffice to say there are some amazing surprises in store for the final 5 nights. But if you weren't fortunate enough to secure a ticket, Ira's been (ahem) blogging about the experience at Yo La Tengo.com. Not for the first or last time, a member of the label family saves their sharpest prose for a site other than the Matablog.