After a decade on the 12th floor (and more than 17 years in the 'hood), today marks Matador's final day at 625 Broadway.  On Monday, we'll be moving to our new fancy digs with our pals from the Beggars Group --- and dig is the operative world.  Much of the staff will be wielding shovels all weekend.

Though we've had our gripes over the years, I cannot claim 625 wasn't good to us.  We had a great view of a Diana Ross photo shoot, once.  And over the years, our glamorous neighbors on the other floors have included video game firms, failed dot coms and the mysteriously dubbed "Juvenille Lingerie".  We never did quite turn Gonzalez y Gonzalez into our local (ie. we're not crazy), but we did manage to stay on the block long enough to bear witness to the closing and reopening of no fewer than 3 Blimpies.

Anyhow, bye bye to the place and the all the lovely ghosts that stomp through the hallway each day.

If you live in the Windy City (or thereabouts), you're in luck! Not only are Love of Diagrams opening for Ted Leo and the Pharmacists at the Metro, but they are also playing another gig that night at the Hideout! Here's the details on the latter:

The Hideout is one of the best venues in Chicago, if not the best, if you ask me! So head on out and have fun!

Band in need of drummer. Accident-prone types need not apply.

This is possibly the only reason for wanting to step foot anywhere near James Blunt...

Spinal Tap, the greatest band that never was, are to play at the Live Earth gig at Wembley, London on 7 July. The three actors Michael McKeen (David St Hubbins), Christopher Guest (Nigel Tufnell) and Harry Shearer (Derek Smalls) have been brought together for the appearance by the director of 'This Is Spinal Tap', Rob Reiner. A short ten minute film has also been made, and will be screened at the gig.

Reiner says of the band's appearance: "They're not that environmentally
conscious, but they've heard of global warming. Nigel thought it was just
because he was wearing too much clothing - that if he just took his jacket
off it would be cooler."

Dear Friends,To commemorate Matador's barely legal status (ie. we're celebrating our 18th this year), we're commissioning a series of t-shirts. Though the garments are meant to be vaguely label/logo insipired, but we're hoping for something a bit more inspired that our previous designs (though that said, the Matador "that's italian" shirt still goes for crazy loot on eBay).

The shirts will be printed in a limited run of 200 per design, with each designer receiving $250.00 (USD) plus 20 shirts to be peddled or given away as he or she sees fit.  In turn, Matador will flog the remaining shirts for a sum  to-be-determined, but it'll probably be on the pricey side of things.

The selected designs will be available for viewing on the Matador site & blog for advance purchase, though they'll also be available from select retailers.  We'll provide links to the individual designers' websites, too.

Knock yourselves out. Thank You. 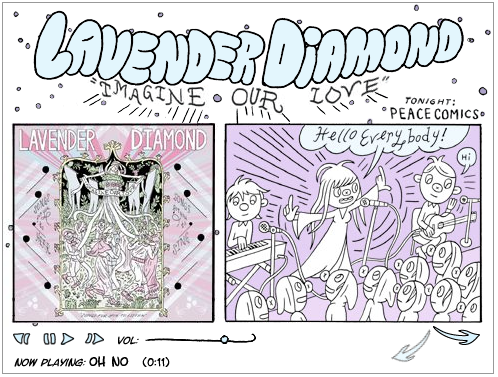 For your streaming pleasure, the portions of Lavender Diamond's forthcoming 'Imagine Our Love' (CD/LP, May Eigth), right here.

Jennifer O'Connor's Wednesday night residency series at the Living Room kicks off on May 2, a night that will serve as a record release show for her split 7" with Choo Choo La Rogue. There's also a drawing for a $50 iTunes giftcard, but even you non-materialistic types would be foolish not to turn up. With all due respect to Angus Young, Rowland S. Howard and Steve Lucas, The Coloured Balls' Lobby Loyde might be the most important Australian rock guitarist of his generation or any other.  Loyde passed away Saturday after a struggle with lung cancer --- he's capabaly eulogized at WFMU's Beware Of The Blog by Brian Turner.

Starting off in 1963 with various combos including the Stilletos, Purple Hearts, Wild Cherries, and Thorpe's early Aztecs, Lobby took his amazing guitar playing through many phases from straightforward R&B through acid psych and spacerock soundtracks and schooled countless countrymen for years to come.

Not since Lizzie Grubman turned that valet stand into her personal monster SUV rally have we witnessed such an embarassingly-public-publicist-melt-down as Man Man's publicist's public melt-down over at Philebrity.  We're pretty sure people only go to that blog to remind themselves of which night is free Sparks night at the Khyber, so what's the point?

Asked if we support college and non-commercial radio here at Matador, we would have to reply "yes". And, of course, if that means plying college MDs with free goods, tickets and expensive gifts to pump up chart positions, we'd emphatically reply "hell yes!!"

Well, The Ponys are about to put a little more rock action in their support. The Free Yr Radio campaign is putting together a series of in-stores to help in the support of the local college radio stations across the US and next Tuesday April 24th the band are going to be rocking Urban Outfitters (where else?) in Lawrence, KS in support of the very fine radio station KJHK.

The show begins at 6pm and your free invite can be printed at www.freeyrradio.com/kjhkguest.

Make sure you show up early and have your invite in-hand as the show is first come, first served and you MUST have an invite.

A Shitty Week For My Diaper Service 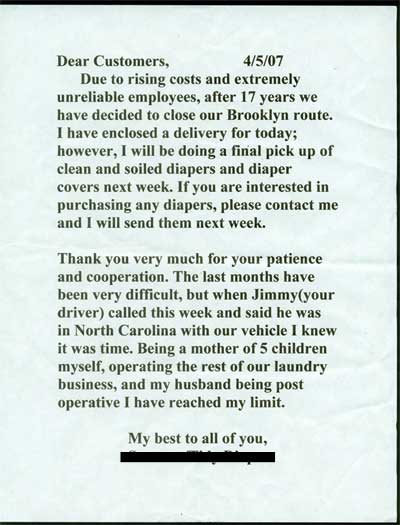 Yes folks, with this letter left on our doorstep last week (the second half of which reads half like a missive from NASA on why Lisa Nowak won't be on Atlantis flight STS-117), it's official...no more diaper services in Brooklyn.

(Gerard:  Apologies in advance if I'm turning Matablog into babycenter)

Matmos in London! In July!

Yes, the fine men of Matmos will once again grace these shores (England, that is) on July 1st for a date in the Royal Festival Hall with our old pal Cornelius.

More information can be found here.

And obviously, this will be nothing less than MIND-BLOWING.

Here's Your Sunday Night All Figured Out

In Every Dream Home, A (Fuhrerbunker) Heartache

From the Guardian's Karen McVeigh,

Bryan Ferry has apologised for remarks he made praising Nazi iconography. The 61-year-old singer sparked condemnation from Jewish leaders after he was quoted in a German newspaper describing the aesthetic behind Nazi Germany as "just amazing".

In an interview with Welt am Sonntag, Ferry also revealed that he calls his studio in west London his "Fuhrerbunker".

He said: "My God, the Nazis knew how to put themselves in the limelight and present themselves. I'm talking about Leni Riefenstahl's movies and Albert Speer's buildings and the mass parades and the flags - just amazing. Really beautiful. "

The singer, who is also a model for Marks and Spencer, issued a statement yesterday in which he said he was "deeply upset" by the negative publicity his remarks had caused. It added: "I apologise unreservedly for any offence caused by my comments on Nazi iconography, which were solely made from an art history perspective. I, like every right-minded individual, find the Nazi regime, and all it stood for, evil and abhorrent."

Because I Think The Matablog's Readers Are Mature...

....and of a strong constitution, I suggest you check out the Mirror's interview with David Gest. Who amongst us hasn't stayed up late at night, curious about the details behind how he lost his virginity?  Or longed for the day we'd learn about his teenage experiments with angel dust?

(Chan on the cover of the May issue of ID, photograph by Karl Lagerfield)

There's one additional Canadian date to be confirmed.

Saturday's Gonna Be a Good Day

Two free in-stores, two cities, same time.  Love Of Diagrams will be performing a free, all ages show at Amoeba Music in San Francisco this Saturday at 4pm.  Meanwhile, Jonathan Meiburg and Thor Harris of Shearwater will performing at End Of An Ear in Austin.