A few weeks ago I was killing time between flights at big box-y retailer who shall remain nameless, and though I'd originally ventured inside to purchase a car charger for my phone, I ended up dropping $16.98 on the new Judas Priest double CD 'Nostradamus'. The cover sticker claimed there was a coupon good for a free general admission ticket to see Priest, Dio-fronting-Sabbath, Motorhead and Testament, and I figured even if the concept album was just as rotten as I suspected, this was still a good deal.

WRONG WRONG WRONG.  As it turned out, Mr.-Has-No-Loyalty-To-Indie-Retail got karmic payback up the rear when he failed to read the fine print --- "WHILE SUPPLIES LAST", etc.     No free Priest ticket.  One $16.98 pair of ugly coasters.  Let this be a lesson to you all --- if you're gonna buy terrible records, the least you can do is buy them from a record store and not some fucking refrigerator warehouse.

With that intense experience behind me, I was pleased to read the following interview with Judas Priest's Rob Halford, as conducted by the LA Weekly's Skylaire Alfvegren.

L.A. WEEKLY:Rob, how are you?
ROB HALFORD:I'm fine. Did you survive the earthquake?

I was in Northern California at a UFO convention.
Oh, for the band?

No, not the band.
The things in the sky?

The things in the sky.
Well, I've got some stories to tell you. I've had one or two encounters in England, not close encounters, but things that have totally freaked me out. It absolutely fascinates me. I think maybe just because it's an artistic thing. People that are in tune with their emotions and creativity, I think that a lot of us are prone to that almost sixth-sense phenomenon. Having said that, people from all walks of life see those things in the sky, you know. But I think it's something very bizarre and it's been with humanity forever.

Ezekiel's Wheel, Zoroaster, heck, Muhammad, the Dogon tribe ... I'm curious. Do you feel certain camaraderie with Nostradamus because he was basically exiled, somewhat like heavy metal, and ultimately triumphed when he gained the patronage of Catherine de Medici and wrote the quatrains?
Yeah! Thank you for picking up on that! You're one of the few journalists that has. But that was one of the appealing parts of the man's character. You know, in metal, we talk about rejection, and running up against people that attack us. That's exactly what that guy went through. He was looked upon as a bit of a freak, and he had this gift, this uncanny ability to have these visions and prophecies, and he was looked upon as being someone — at least by the Catholic Church — dabbling in the black arts.

I definitely see a parallel between your music and the man's life.
Oh, but it was a terrible time to live, the 16th century, to a certain extent. There were still remnants of the Inquisition going on, which was hideous. He dealt with all that, and we thought, man, this guy led a bit of a metal life with some of those emotional elements, but he stood up for himself and he was triumphant in the end, and that's just a great story. Shearwater discuss and perform songs from 'Rook' on the Spinner (formerly AOL) Interface.

Finally, A Social Injustice We Can All Condemn

We occassionally have trouble generating sufficient publicity for some of our acts, so I can only sympathize with the plight of a P.R. maven enlisted to try and convince the Hartford Courant to interview her scalper client.  If such businesses can achieve legitimacy through media management, that's awesome news for loan sharks, cockfight organizers and meth dealers.

well, not in those exact words. Thanks to Rich Walker for forwarding this.

Jennifer O'Connor: on the air and online

Two more important media events happening next week to make you aware of.

Viva Radio Presents
Me Plus You hosted by Ted Shumaker
with special guest Jennifer O'Connor
An in-depth interview and exclusive live songs at the Viva Studios.
Air Date 9/1/08, 12:30PM EST and available in the Archive Vol. 24
Check out VIVA-RADIO

Then on Friday, September 26th, Jennifer O'Connor will light up the radio airwaves when she is a guest on WNYC's Soundcheck with John Schaefer.

Tune in at 2:30PM on 93.9FM in the New York area or WNYC online to hear Jennifer's live interview and two-song performance.

Shearwater loves SLC, and we get the feeling that its mutual (yeah, as in like-likes them!!), so the band will be playing a free in-store at Slowtrain this weekend (thats like 2nd base!). 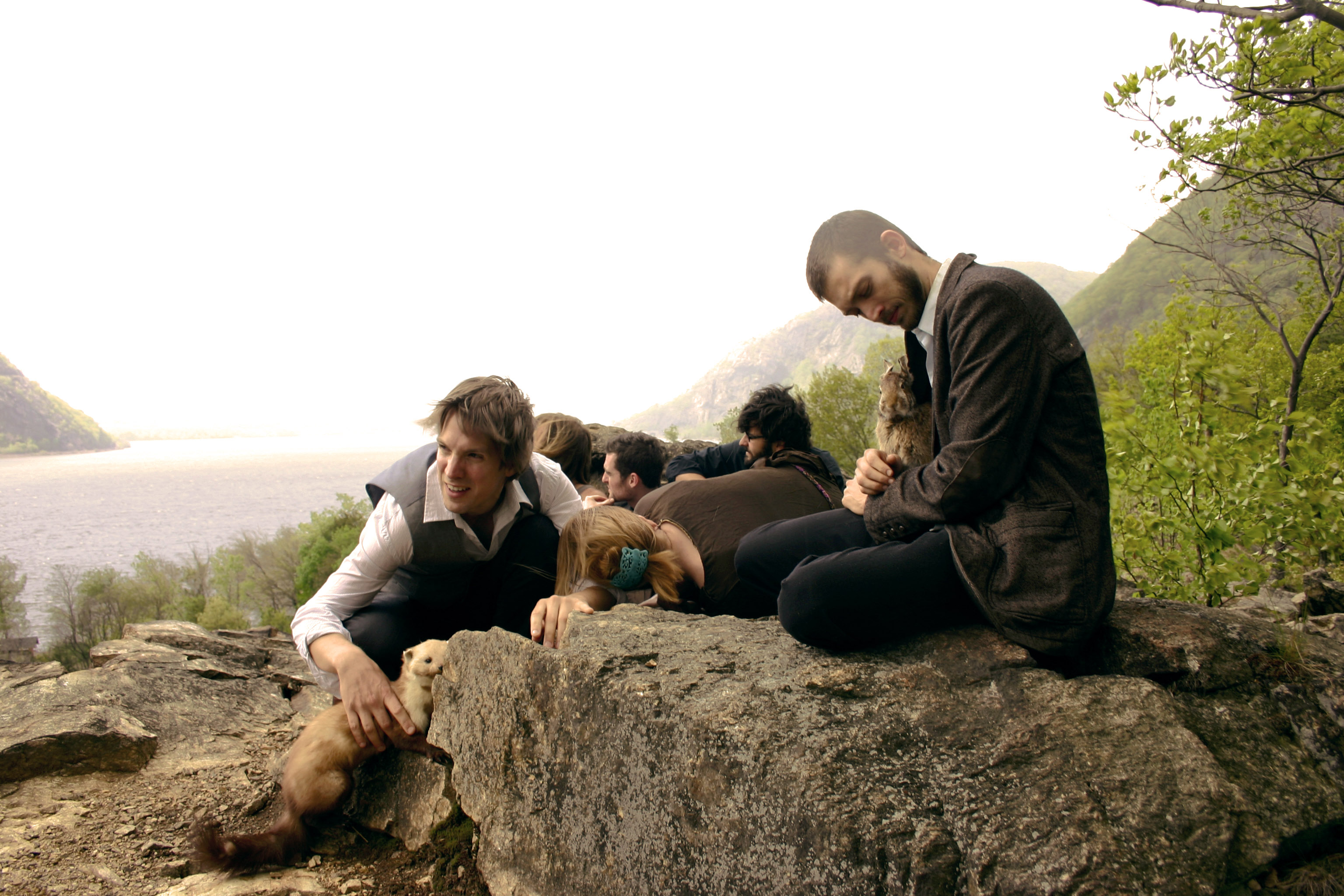 Lou Reed's 'Berlin: Live at St. Ann's Warehouse' has a new title and will now be landing in stores on October 21 (September 30 on iTunes). The record contains the first live performance of the controversial 1973 masterwork, 33 years after it originally came out. It was recorded at the filming of Julian Schnabel's 'Berlin' feature length film in December 2006, featuring Antony Hegarty, Sharon Jones and Steve Hunter among other guests, with production from Bob Ezrin and Hal Willner. See the original announcement for the full story behind this remarkable album.

The first MP3 from the record is "Caroline Says, Pt. II." The song is one of Lou Reed's heavier subjects, and it receives an extraordinarily moving rendition here:

Is Jennifer O'Connor The Hardest Working Woman In Show Business?

With all due respect, probably not, But if by suggesting otherwise we can get the actual hardest-working-woman-in-show-business to send us a threatening letter, we've got more great material for the Matablog. Jennifer's frequently updated touring on behalf of 'Here With Me' includes the following, newly-confirmed dates.

It Had To Happen : Nardwuar Vs. Jay Reatard 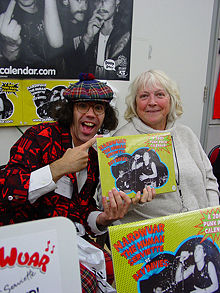 (we just tell folks this guy is kinda like Vancouver's answer to Kurt Loder).

Possibly the most intense meeting of the minds since the David Frost/Richard Nixon interviews. The grilling of Jay begins about 32 minutes into the program. mp3

Fuck You I Won't Do What You Tell Me

Fucked Up triumphed as one of the most memorable sets from the Lock Up stage's at Reading and Leeds this weekend, followed by a late night set at the Rivermead Centre with guest performances from Frank from Gallows and Alexisonfire. Fucked Up are hitting London again on Tuesday to finish off their August Olympic tour. Join us if you can...

And not that i'm one for spreading rumours, but there may be some late night surprises across town at about 1am the same night.

Fucked Up At Reading/Leeds Festival 2008 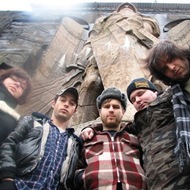 Fucked Up get a review from The Guardian for their performance at this years festival and the only complaint is, 'That the sound system can't seem to cope with hardcore this, um, hard and gives up halfway through.' For the full article click here.

Jennifer O'Connor will play a Free In-store at the lovely Permanent Records in Greenpoint this weekend, Saturday, August 23rd at 3 PM! What a wonderful way to spend a Saturday afternoon, and you can pick up a copy of her newly released album, Here With Me.

New/exclusive version of four of 'Here With Me''s standouts, available now for free download from Daytrotter. Illustration by Johnnie Cluney.

From the album, 'Here With Me' (OUT TODAY), video directed by Zacarias Bezunartea, hosted by Stereogum. Please keep in mind, Jennifer and Dump will be playing NYC's Mercury Lounge tomorrow night to commemorate the release of 'Here With Me'.

While today marks the long awaited release date for Jennifer O'Connor's new album, 'Here With Me', let's hit the rewind button for a moment and recall "Sister" from Jennifer's 3rd album, 2006's 'Over The Mountain, Across The Valley & Back To The Stars'.  Said composition provides the musical backing for the above clip for the Stand Up To Cancer Movement, something that has considerable personal resonance for Ms. O'Connor (and quite probably for many of you reading this).

Back to the promo/marketing aspect of our daily blog, in addition to her huge pile of dates supporting 'Here With Me', the following new shows were just confirmed.

Both nights are in support of The New Year, whose self-titled 3rd album comes out on Touch & Go this September 9.

more dates to be announced shortly

(thespian/rocker while playing the part of John Lennon's assassin a typical independent label executive, and on the right, after hunger strike to protest non-payment of royalties)

If you think the fact that we have sold in excess of 2 million records and have never been paid a penny is pretty unbelievable, well, so do we. And the fact that EMI informed us that not only aren't they going to pay us AT ALL but that we are still 1.4 million dollars in debt to them is even crazier. That the next record we make will be used to pay off that old supposed debt just makes you start wondering what is going on. Shouldn't a record company be able to turn a profit from selling that many records? Or, at the very least, break even? We think so. - Jared Leto, 30 Seconds To Mars.

Harsh stuff, indeed, however Leto fails to disclose in his response to Virgin/EMI's $30 million suit against his band precisely how much 30 Seconds To Mars were advanced against royalties.  It does seem rather fucked that a record company couldn't turn a profit on two million sales. However, it's entirely possible that enough dough was dropped signing the band, recording their horrible records and promoting & marketing said recordings , that EMI did in fact, lose money on the deal.

Which doesn't necessarily mean Leto and pals aren't owed anything, either. But if he's unwilling to specify which portion of EMI/Virgin's spending on his behalf was recoupable and which wasn't, this is just a dopey exercise in posturing. But I remain hopeful 30 Seconds To Mars can resume their career with an artist-friendly label, one that unlike the revolving chair scenario at publicly held EMI, has had the same visionary leadership in place since the label's inception.

If Tony Victory would like to pay me a finder's fee, I'll gladly donate it to charity.

Citizens of the UK and Ireland beware: Jay Reatard coming to a town near you

To the 95% of the population who didn't get a chance to see Jay, Stephen and Billy back in May, your angry emails/prayers/sacrificial animal offerings/bribes/pleas have been answered. Please stop bothering us now. Seriously, I'm not joking.

Times New Viking - Touring The UK With Some Heavy Characters 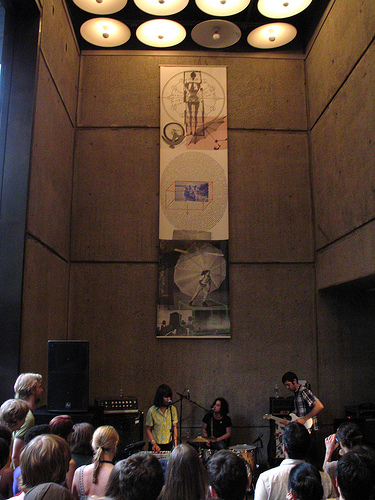 (TNV at the Whitney, photo taken from Forklift's Flickr stream)

....to be more specific, No Age and Los Campesinos! in what our friends at Drowned In Sound have dubbed the Shred Yr Face Tour. Not to get all old-timer on you, but Faxed Head were trading in shredded faces years ago and nobody ever invited them to go overseas (deportations excepted).