Nicolas Jaar and Dave Harrington gear up for an intense month of touring, as DARKSIDE's world tour comes to Europe this March.  Most dates are long sold-out, but there's a limited number remaining for Amsterdam, Stockholm, Nice and Manchester, available from www.darksideusa.com/tour/.

Today EMA debuted the second track from her upcoming album The Future's Void, out April 8th. The song is accompanied by a music video collaboration with acclaimed in-tro-net artist Molly Soda, directed by Vice Cooler:

The Future's Void is available to pre-order on CD, Cassette and LP (limited edition lavender vinyl!), and you can add a shirt at real value. iTunes and Amazon are taking orders, too, if that's how you slice the pizza.

Erika M. Anderson had this to say about the video:

SO BLONDE. The smiling blonde white woman is the most exploited image in the world. Can we talk about that? How about discussing if the selfie is a new form of feminist art or just a direct descendant of capitalist advertising? No? Hmm… Yeah I couldn't figure out how to put that into a video either. So how's about I just roll around Venice Beach wearing a Jim Morrison Tshirt while gifs by Molly Soda bounce in and out? Ok! That works! The semiotics of palm trees! Everyone gets the short-hand of SoCal. It'll look great, be fun, and still gets to ask the important questions: How many bits do we have to reduce the dancing blonde babe to before she is no longer a symbol of sexiness? At what point do tits become simply bits? And who owns the sparkly dolphin anyway???

EMA is hitting the road soon:

Wednesday Night : Yo La Tengo (Continue) Murdering The Classics On Behalf Of WFMU In what has become a tradition almost as cherished as declarations the New York Mets are financially solvent, Yo La Tengo will make their annual pilgrimage to WFMU's Jersey City studios this Wednesday night (February 26, 9pm eastern) for the Evan "Funk" Davies show (co-hosted this week by longtime YLT associate Gaylord Fields). As you've probably already guessed, for the the paltry sum of $100, Yo La Tengo will (hopefully) cover a song of your selection, with all funds going to WFMU's annual Marathon.

You can listen or watch a live video stream at WFMU.org, but be advised that unlike most of the station's wonderful programing, this show will not be archived for on-demand consumption. You can submit your pledges and song requests here in advance.

Stephen Malkmus & The Jicks - In Session At WFUV

During January's week-of-release whirlwind of NYC activity for the release of 'Wigout At Jagbags', SM & The Jicks took up Bobby Bonilla's kind offer to show them the Bronx and topped it off with a session at WFUV. "Shibboleth" is shown above ; there's also versions of "Lariat" and "Scattegories".

Thurston stopped by one of his favourite London record stores recently, for a set at Flashback Records with James Sedwards, captured by staff at the store at uploaded to their blog.  Fans of the Dance vinyl section, you might want to skip to skip the second video.

If Elizabeth Winship Could Shred : SM's Advice For The Lovelorn

Ask a Grown Man: Stephen Malkmus from Rookie on Vimeo.

Rookie needed someone for their "Ask A Grown Man" segment.  Until the grown man shows up, here's Stephen Malkmus!

"We've just kept our head down. We're the Status Quo of indie, we're still here – maybe that's the thing. We're a baroque pop band that came up in the mid-'90s, during Britpop, and we're still here!"

Says Stuart Murdoch, after the announcement that NME are to award Belle and Sebastian with the Outstanding Contribution To Music award at next week's 2014 NME awards, taking place at London's Brixton Academy.  With their recent Q magazine (for their "Spirit Of Independence") and Sundance Film Festival award for God Help The Girl, they better be adding a layer to that groaning trophy cabinet sooner rather than later.

Happy Valentine's! On this most loving and confusing of all holidays we're very excited to announce EMA's Spring North American Tour kicking off shortly after the April 8 release of The Future's Void. Tickets go on sale TODAY so get 'em while they're hot. And while you're at it visit here to listen to a sampling of songs from The Future's Void.

Can't think of a V Day gift for the music lover with exceptional taste in your life? Well you have come to the right place...
Pre-order The Future's Void on CD, LP, and Cassette on the Matador Store (LP on limited edition lavender vinyl!). Also available bundled with an EMA t-shirt at a discounted price.
Pre-order on iTunes & receive "Satellites" as an instant download.

The website allows the viewer to explore and experience them in an interactive manner, go ahead and download "Love Soul", along with these original, animated GIFs, directly from the site as part of the full experience.

Take "Love Soul" with you and dig in to and/or revisit 'Impersonator' today.

Filmed and directed by artist Julien Langendorff in Paris this past winter, Thurston Moore brings us a Valentines video for Heavenmetal, a song that first appeared on the self-titled album by Chelsea Light Moving, released in March last year.  As previously mentioned, a new album is on the way for Thurston Moore, coming this June. 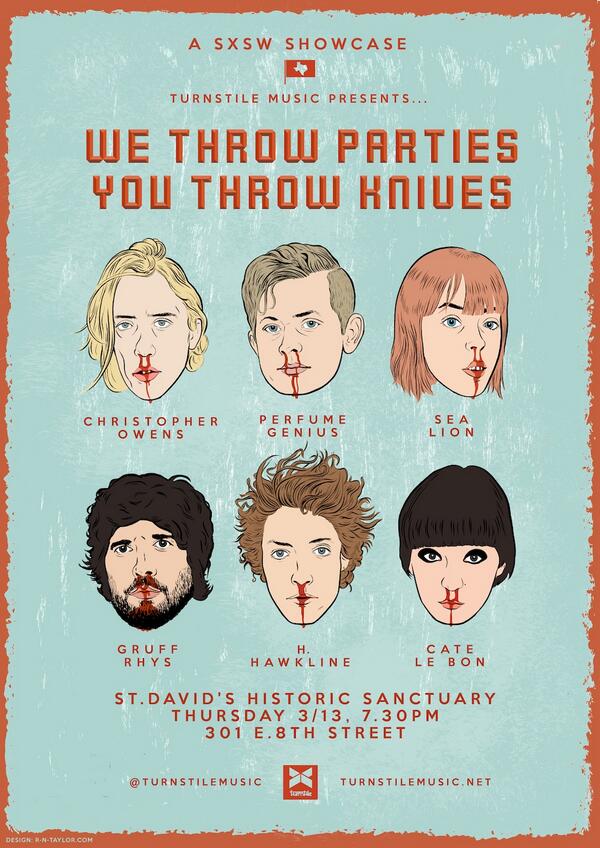 March 13 at Austin's St. David's Historical Sanctuary will mark a) the first Perfume Genius show of 2014 and b) a chance to hear post-'Put Your Back N 2 It' material for the first time. Not that we know the evening's repertoire in advance or anything. The show is presented/programmed by Turnstile Music and will also feature performances from Christopher Owens, Gruff Rhys, Cate Le Bon and others.

We'll be updating you on other Matador artists' participation during SXSW shortly, but at the moment it looks as though EMA, Kurt Vile, Fucked Up and The Young will all be playing during the music portion, while Stephen Malkmus & The Jicks and EMA will in town the prior weekend for SXSW Interactive. When we've got everyone's schedules in full, we'll share the info.

The Photography of Ceremony's Ross Farrar - On Exhibit In Santa Rosa, CA

"I will be showing over 150 color photographs on the 22nd at 4pm, at Heritage Public House, in Santa Rosa. The photographs span over a decade and will include various people and places I’ve encountered in that time: 2004-2014. Also, Heritage will be playing The Vibrating Antennas new LP, Th’ Length, throughout the evening. There will be beer discounts and many a strange times to be had."

Farewell To The One & Only Ricky Luanda

It is with considerable sadness that we share the following news : CHAIN GANG's Ricky Luanda passed away earlier this year from esophageal cancer. Chain Gang (in general) and Ricky (in particular) provided a window onto a side of NYC much of the city's cultural gatekeepers would've sooner forgotten. Though their 1977 7", "Son Of Sam" b/w "Gary Gilmore And The Island Of Dr. Moreau" has achieved mythic status in recent years (the A-side covered by JSBX, Ty Segall and Fucked Up amongst others), subsequent recordings, performances and films were that all too rare combo of the genuinely weird but always fully realized. Their discography is slim, but close to flawless. Bruce Springsteen recently argued that Cleveland's Rock & Roll Hall Of Fame is shamed by their oversight of Suicide ; whether or not you agree with this statement, Chain Gang long ago earned their place in the Smithsonian, the Museum Of Natural History, and perhaps even Universal Studios in Orlando, FL. 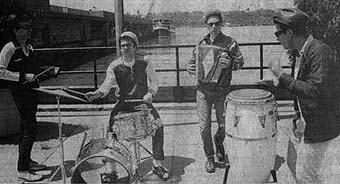 We were very lucky to work with Ricky during the early days of Matador and we're beyond lucky to have experienced his friendship and observed his artistry-in-action. NYC, nay, the world, is a poorer place without him. Our thoughts are with his family, friends and musical co-conspirators.