Muzz, the project of Paul Banks, Josh Kaufman, and Matt Barrick, present a Tiny Desk (Home) Concert filmed, recorded, and mixed by D. James Goodwin for NPR Music. They play four tracks from their self-titled debut released last summer. The cozy, mellow set is one of the two proper Muzz performances that exist, following their Kingston, NY performance of Arthur Russell’s “Nobody Wants A Lonely Heart” from their recently released Covers EP.

Kaufman describes the filming to NPR Music: “At the very end of a long couple days of rehearsal and taping we, very late at night, Paul jet lagged and the rest plain exhausted, stayed awake a little longer to try a campfire style strum along to some of the songs from our new LP. The result here is our Tiny Desk. It means A LOT to us and we're totally honored to have Muzz be a part of this now legendary series. We also want to acknowledge the fact that it's a privilege for us to even be able to convene in person right now and were very happy that we could use that opportunity to share these stripped down, very human/intimate portraits with y'all.”

Stream/purchase What to Look for in Summer

Back in December, Belle and Sebastian released What to Look for in Summer, a live double album gathering choice selections from the band’s 2019 world tour, including the epic “Boaty Weekender” summer cruise. Today, you can watch new a video for the band’s album-closing performance of “Belle and Sebastian” which has been sourced entirely from footage of fans dancing and lip-synching along to the song.

The clip joins a formidable 23-song playlist featuring dedicated visuals for each track on the What to Look For in Summer, including a mix-and-match of custom-made Belle and Sebastian dolls by Angharad Jefferson, original illustrations by Graham Samuels, and live footage from The Boaty Weekender and elsewhere.

"Austin City Limits has always been good to us, going back to when I was served underage beers in the old UT studios at the Stevie Ray Vaughan taping of 1989. We’ve played the show four different times now, and it never feels less than epic to be on stage with that set of the Austin skyline."
-Britt Daniel

Gimme Fiction Tracklist
01 The Beast And Dragon, Adored
02 The Two Sides of Monsieur Valentine
03 I Turn My Camera On
04 My Mathematical Mind
05 The Delicate Place
06 Sister Jack
07 I Summon You
08 The Infinite Pet
09 Was It You?
10 They Never Got You
11 Merchants of Soul
Spoon online :

"How Lucky" (with John Prine)
"Prine, KV and Ferg as Babies" drawing by Delphine Vile in Nashville. Today is the official release date for the deluxe reissue of Mary Timony's 2000 solo debut, 'Mountains'.  The expanded, 2 disc version is available in stores today. 2020 saw the release of Set My Heart On Fire Immediately, Perfume Genius’ most celebrated album to date which topped many end of year lists and cemented him as one of his generations most innovative and essential artists. Today, Perfume Genius (Mike Hadreas) announces IMMEDIATELY Remixes, available February 19, a companion album which sees every song on Set My Heart On Fire Immediately remixed in original running sequence by an all-star cast of Jaakko Eino Kalevi, A. G. Cook, Jim-E Stack, Planningtorock, Jenny Hval, Initial Talk, Boy Harsher, Nídia, Danny L Harle, Westerman, Actress, Koreless and Katie Dey.

"I'm very honored to have all these incredible musicians rework these songs,” says Hadreas. “I felt personally remixed listening to their versions, hearing the spirit of my song completely transformed was very magical. Each one feels like a little portal to a fucked up shared world."

Marking the announcement is a new video by electronic duo Boy Harsher for their beguiling. nocturnal take on 'Your Body Changes Everything’. The video was directed by Boy Harsher vocalist Jae Matthews together with Caitlin Driscoll and stars model Teddy Quinlivan and Brandon Gray.

Matthews notes, “For the video, I wanted to create something that reflected my feelings of disconnect. Summer during Covid was complex - everyone was locked down, but so desperately wanted out. Screens and distance became the norm for casual interaction. Inspired by David Cronenberg's Videodrome (1983) and Tobe Hooper's Poltergeist  (1982), I developed this idea where a man becomes haunted by a beautiful alien - who can only access him through his television set. Long live the new flesh ! Luckily, Teddy Quinlivan was eager to participate from the very start and was a perfect cast for the flawless extraterrestrial. The desire within the video - the man wanting this cosmic babe so bad - matches the tone of the remix, especially during the sequences where she asks "Can you feel my love?" through the static on the TV.”

Muller adds: “This remix was a product of the darkest days of spring lockdown. The original, ‘Your Body Changes Everything’, reminded me a lot of The Walker Brothers, and I focused on that vibe when picking sounds, while attempting to honor the initial feelings of lust and desire.” From operatic acid-rave ('Just A Touch’) to opulent 80's synth-funk ('On The Floor’), ambient club polyrhythms (‘Moonbend’) to breakbeat-addled electronic pop (‘Describe’), tech-damaged tremolo waltz (‘One More Try’) to a mid-song running artist commentary on the remix itself ('Leave’), IMMEDIATELY Remixes is an endlessly surprising, imaginative and replayable set to match its source material.

In the last few months, Hadreas has appeared on JIMMY KIMMEL LIVE!,  played a global live stream from The Palace Theater in downtown Los Angeles and announced the publication of Immediately, the book companion to the new album featuring iconic portraits of Perfume Genius by celebrated French photographer Camille Vivier.  Perfume Genius has also appeared on The Late Show With Stephen Colbert performing ‘Whole Life’ for their #PlayAtHome series and on Tonight Show with Jimmy Fallon where he performed ‘On The Floor’ and ‘Jason.' 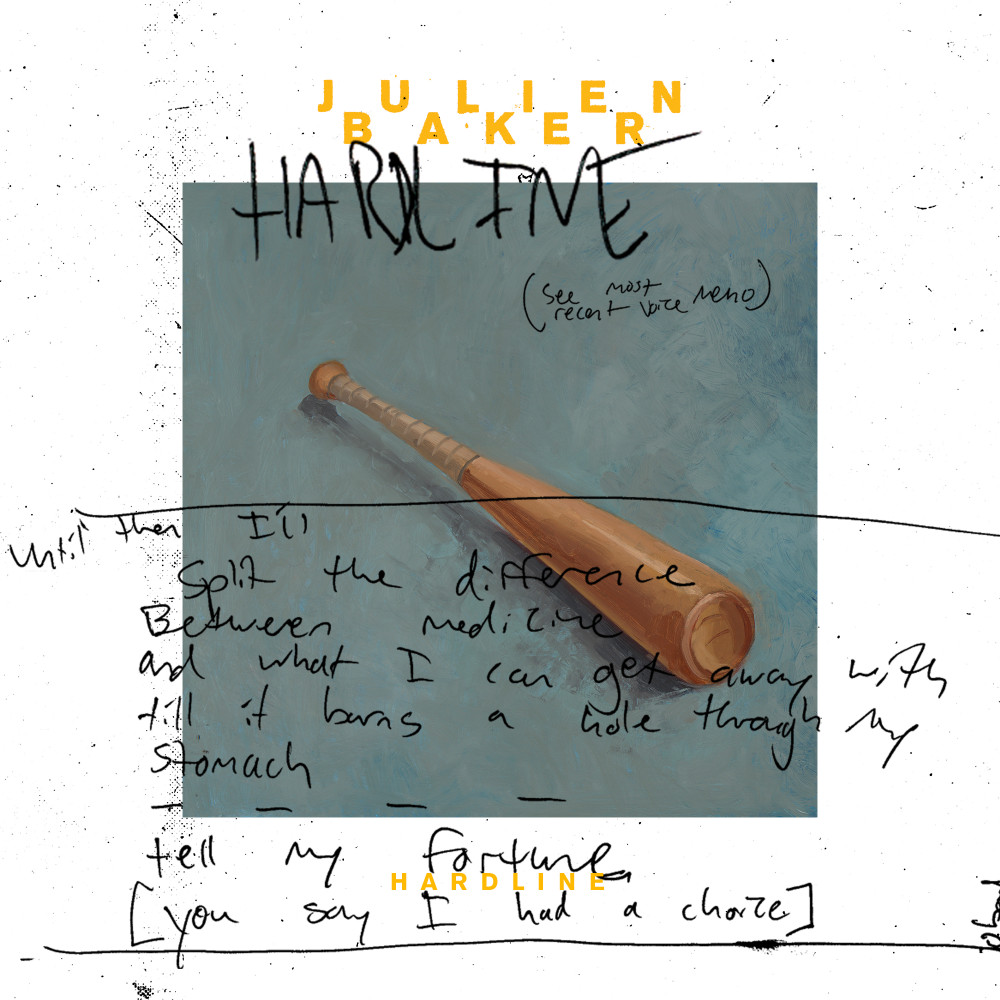 “A few years ago I started collecting travel ephemera again with a loose idea of making a piece of art with it. I had been touring pretty consistently since 2015 and had been traveling so much that items like plane tickets and hotel keycards didn't have much novelty anymore. So I saved all my travel stuff and made a little collage of a house and a van out of it. I wanted to incorporate it into the record and when we were brainstorming ideas for videos we came across Joe Baughman and really liked his work so we reached out with the idea of making a stop-motion video that had similar aesthetic qualities as the house I built did. I don't know why I have the impulse to write songs or make tiny sculptures out of plane tickets. But here it is anyway: a bunch of things I've collected and carried with me that I've re-organized into a new shape.” - Julien Baker

This morning we're debuting another track from Julien Baker's much anticipated forthcoming album 'Little Oblivions' with the new single, “Hardline”. The video for “Hardline” was directed by Joe Baughman who notes, “even after having spent 600 hours immersed in ‘Hardline’ and having listened to it thousands of times, I am still moved by it. It was a fun and ambitious challenge creating something that could accompany such a compelling song.  The style of the set design, inspired by a sculpture that Julien created, was especially fun to work in. I loved sifting through magazines, maps, and newspapers from the 60s and 70s and finding the right colors, shapes, and quotes to cover almost every surface in the video."

'Little Oblivions' is out February 26.

At 10am EST today, listeners can tune in to hear Julien's KEXP session via the station’s YouTube page.  She performs “Hardline” as well as other tracks off 'Little Oblivions'. The session also features an interview with Cheryl Waters.

Julien Baker will release her third studio album, Little Oblivions, on February 26. Last night she performed the first single from the album, “Faith Healer,” on The Late Show With Stephen Colbert. Captured in Nashville, it features Baker backed by a full band and represents the expanded sound that can be heard on the forthcoming album.