Spoon - Panorama Webcast, "Can I Sit Next To You" from Thursday's "The Late Show WIth Stephen Colbert"

Spoon - "Can I Sit Next To You", from Thursday's broadcast of "The Late Show With Stephen Colbert". Footage courtesy CBS.

Catch Spoon at the Panorama Festival today at 5:55pm eastern time (Pavilion stage), with the live webcast available here. Tonight's set with also be broadcast live on Sirius/XM's XMU (Channel 35) will a replay at 9pm eastern. 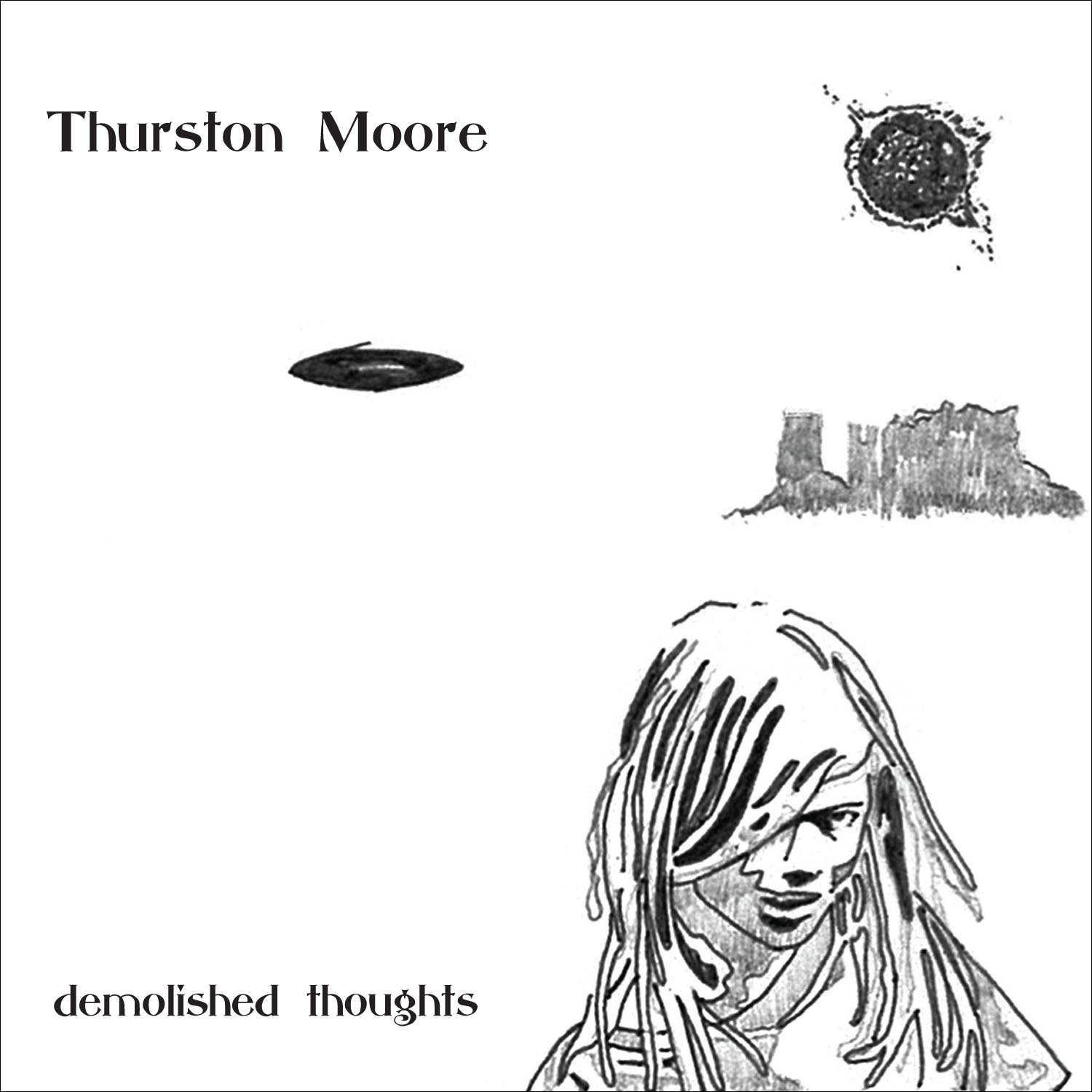 Starting today you can treat yourself to a preview of the Thurston Moore album Demolished Thoughts, via streams on the NPR and Guardian websites.  The album proper comes out next week, via the usual digital and CD formats and also on limited edition clear double-vinyl (from Urban Outfitters stores) or blue vinyl (from your favourite local independent retailer or the Matador store).

Thurston plays live this Friday at Williamsburg Hall of Music and then will be playing in-store at Other Music (NY) on the eve of the album's release. After that he plays 3 shows in Europe before returning for more US dates and shows with Kurt Vile, all of which are listed below: so it was 6 degrees F (-14 Celsius) when I left for the office this morning.  A crisp, bright, and beautiful winter morning.  Admittedly I'm in quite a positive head space for a frigid, January, Monday morning but I digress.  Esben & The Witch appear to be in an equally friendly mood this winter's day and have premiered their debut album Violet Cries, in full, via Stereogum

Rage of the mastering engineers

The pent-up frustration of mastering and recording engineers who have had to deal with members of an ignorant public for years has finally found in an outlet in a series of viral YouTube videos featuring computer animated characters speaking in computer-generated English accents.

The videos are brilliant, and point to the REAL revolution in the music industry over the past two decades, which is the proliferation of affordable (if often crappy) home-recording solutions. Someone needs to tell all those newspaper reporters that ProTools and GarageBand have had at least as much effect on the industry as P2P and torrents. It's hard to believe now, but in 1980 it cost a lot of money even to cut a 2-song hardcore single. Analog recording is slow, expensive and requires a ton of skill. Actually, the same goes for decent digital recording, but it's a hell of a lot cheaper and faster than it used to be. There are now approximately 200 times as many releases coming out annually as there were in 1980, and that doesn't even account for the huge quantity of music that doesn't see a commercial release and just lives on MySpace pages, YouTube videos and CDRs.

The above video would be enlightening and hilarious all on its own, but there are tons more. The videos have apparently struck a chord: "OMFG classic? bigtime relate to this!" and "BAHAHAAAAA. ? I am approached by so many douche-bags like that guy all the time. Stupid FruityLooping, clip-activating, preset-selecting chumps!!!"

Jon. Wow. I have to say you really made those beats bang. Bro. Bro. Get me?

I fully expected to do another one of these record store visits sooner, but long drives chasing the Jamie Lidell tour bus kept us from record store adventure #2 until yesterday in the lovely city of Philadelphia.

We decided on A.K.A. Music after having it recommended to us on various occasions.  Max was working the counter and he gave us some very useful information.

JO'C: How long have you been working here?

JO'C: Cool. Where do you like to listen to music?

JO'C: And what is your preferred format?

JO'C: Finally, where's your favorite place to eat in Philly?

I would also like to note that A.K.A. has a really great bargain bin used cd selection. I got a bunch of greatest hits discs for 2.99 - New Order, Kinks Kronicles, and some weird Prince Greatest Hits I hadn't seen before. Also a Massive Attack soundtrack and a disc by the Departure Lounge that I didn't have. I would have spent many hours combing through it if we'd had more time.

PS. I'll do a blog sometime soon about the actual shows we've been playing!

I started a tour today supporting Jamie Lidell and I'm in Chicago at the Abbey Pub awaiting soundcheck. Because I enjoyed participating in Record Store Day so much earlier this year, I've decided to visit local record stores in some of the cities we are playing and find out the answers to some important questions. This is my way of continuing to celebrate all the awesome record stores throughout the country.

Today, we went to Reckless Records in Wicker Park and talked with Dan.

JO'C: How long have you worked at Reckless?

JO'C: What did you have for lunch?

Dan: A chicken flatbread sandwich from 7-11.

JO'C: Do you have favorite restaurant in the area?

Dan: I'm not really a foodie, but I like this Middle Eastern place down the street called Sultan's Market.

JO'C: Do you have a favorite record of all-time and if so, what is it?

JO'C: Am I putting you on the spot? We can come back to this one.

JO'C: What record are you guys selling a lot of this week?

JO'C: Any thoughts on your fave record yet?

Dan: I'll say Daydream Nation, but if you ask me tomorrow, it might be something else.

JO'C: Ok. Thanks for talking to me. I think those are all the hard-hitting questions I have.

Ok! Tomorrow is Toronto and if we have time....we'll be hitting up a store there too.

I'm sitting on the couch at Headgear with my new record almost finished. It took 12 days total. 2 mixes to go and we'll be done. I'm totally sick and need to spend a few days in bed and John got his car broken into last night. So, the last couple of days have been a little bumpy. But when all is said and done (which will be soon), it will have been completely worth it.

We've had so much fun making this record and I can't wait for you to hear it.

Here's a few more pics for ya. Have a Happy Easter!

Me and my new best friend, John Agnello, in the delirium of day 12:

The Tape Of Only David Weave Roth Apologies to The Loud Family for the above headline.  MP3 stolen from Chunklet.

My Chips Versus Yours

While the first, slow burning mp3 off 'Challengers' set off fireworks among the legions of New Ps fans ("My Right Versus Yours"), it apparently stoked the mash-up-making skills of some folks seeking the hidden dirty south vibes of 'Challengers'.

Having missed the whole mash-up craze myself, I'm not sure what to think of it other than we definitely don't have my rights, your rights or all the rights to post it.  So just follow this link below to eventually find it:

The Hood Internet:  My Chips Versus Yours

A Place For Friends(tm), Just Got A Whole Lot Friendlier

In what must seem like Lavender Diamond Day on the Internet, LD's MySpace profile is previewing "Imagine Our Love".  The stream comes down on Saturday morning, so skate on over, have a listen and add 'em as a friend, you just might get called upon as an extra for a future video. 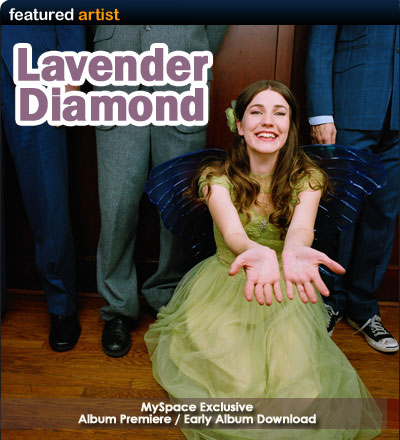 Reich in the Freak Zone

Lack of funds, time and all sorts of other obstacles kept me from attending any of the Steve Reich 70th Birthday celebrations at the Barbican, so yesterday's Freak Zone on BBC 6Music was especially agonising, as Reich himself dropped by to discuss his major works.

If you're a Reich fan (and I sincerely hope you are), you can listen to the show here.

Brightblack are soooo going to fit in when they're on the show on the 5th November.

When Lucy told us who was supporting Matmos (with Zeena Parkins) at their upcoming London show, I got so giddy that she and Mike could only gaze at me, horrified, as I drooled between exhortations of excitement. As Matador UK's resident noise enthusiast, the news that Russell Haswell and Florian Hecker will be putting the digital smackdown on a pre-Matmos audience is as good as it gets.

Both mainstays of the now partly defunct other 'best record label beginning with M', Mego, Haswell and Hecker have been pushing the envelope for quite some time now. Russell Haswell, A&R for Mego, curated the Easy To Swallow club nights for All Tomorrow's Parties, bringing together people like Mark Stewart, Whitehouse, Autechre, Robert Hood, Earth, Aphex Twin etc for nights of uneasy dancing, and has recorded as Satanstornade with Masami Akita (Merzbow), which resulted in the best album cover ever. His 'Live Salvage' album on Mego is incredible. Florian Hecker (above), along with Yasonao Tone performed one of the most intensely visceral noise shows that I've ever witnessed. His masterpiece, 'Sun Pandamonium' is utterly, utterly terrifying. The centrepiece, 'Stocha Acid Zlook' sounds like pterodactyls swooping above you, with screaming victims in their mouths, occasionally getting close enough to draw blood from your ears. I am not mad, that's exactly what it sounds like. Hecker and Haswell have recorded together once - on the 'Revision' 12". 'Harrowing' is how I'd describe it.

Basically, I'm as excited as it's possible to be without bursting.

People are always asking my advice about audio equipment. A great way to get started is to pump up your headphone system. iPods and laptops have crappy little op-amps in them that can't drive good phones accurately or to truly satisfying levels. I recommend the Grado SR-60s for rock in the under-$100 range,

or if you have broader taste in music, the Sennheiser HD-600s (which list for $499 but can be found online for as little as $179) which are much comfier to boot. Both these phones are large and open; closed and noise-cancelling headphones are good for planes but little else, and personally, I can't stand putting things inside my ears.

Then there's the whole amp game. Without getting into huge amounts of detail, you need a LOT more power to drive Sennheisers than Grados, and a lot more power again to drive electrostatic headphones such as the AKG K-1000s or the legendary Japanese Stax line. However, even a little solid-state amp like Grado's RA-1 ($349)

will improve your Grado headphones to an extraordinary degreee. And it's made of a solid block of wood - who can argue with that?

Myself, I prefer tubes, and have recently invested in the handbuilt custom amps from Singlepower, based in Colorado... incredibly nice guy, but beware of the prices. I got a fully tricked out Singlepower MPX3 Slam and it is blowing my mind.

(And probably eardrums, but that's another story.)