Pre-order Lucifer on the Sofa / Stream "The Hardest Cut"

Spoon has shared their take on The Beatles 1967 fan club single "Christmas Time (Is Here Again)" for Spotify Singles: Holiday Edition 2021. The collection marks the fifth year of Spotify Singles: Holiday and includes a wide range of covers and originals, from artists across a myriad of genres, in hopes of connecting friends and family from afar as they listen. Recorded at Jim Eno’s Public HiFi studio in Austin, frontman Britt Daniel says about the track, “Recording ‘Christmas Time (Is Here Again)’ was a group effort that pulled us away from rehearsals and quickly sent us down a turbulent path of what you might call the Christmas spirit. And it’s our song with the most band members doing vocals ever - pretty sure I’m counting four. THE WAR ON CHRISTMAS IS OVER.”

Spoon recently announced the forthcoming release of their tenth studio album, Lucifer On the Sofa, out February 11th, 2022. The album was co-produced by Spoon and Mark Rankin (Adele, Queens of the Stone Age) and features contributions from Dave Fridmann and Justin Raisen. It’s the band’s purest rock ’n roll record to date. Texas-made, it is the first set of songs that the quintet has put to tape in its hometown of Austin in more than a decade and bottles the physical thrill of a band tearing up a packed room. It’s an album of intensity and intimacy, where the music’s harshest edges feel as vivid as the directions quietly murmured into the mic on the first take.  According to frontman Britt Daniel, “It’s the sound of classic rock as written by a guy who never did get Eric Clapton.”

Cat Power : Covering Hugh Martin's "Have Yourself A Merry Little Christmas" In The New Apple Commercial

OK, Judy Garland's version is the best known....at least until this week. Let this be a cautionary tale for anyone quick to scold a sulky teen for fucking around on the smartphone all Christmas. You could be interrupting the next Abel Ferrara!

Watch the video above and donate with all proceeds going to the Festival Of Children and Ali Forney center. Please share far and wide.

This is one of the best infomercials I've ever seen. Stick with it - their product range is wide and deep.

(Also, you now all know what to get me for Christmas.)

If you liked that one, you might also enjoy the commercial below for a tilting wet grinder (industrial size). I mainly found it interesting for the insanely weird background music. This Christmas just got 10% better

If you're anything like us you probably haven't started your holiday shopping yet, and it's a good thing you haven't. Now you can get your friends and family something they will really love and take advantage of a 10% off sale valid through December 15th at the Matador store. Just make sure to enter code 'holidaze' at checkout. If all goes well, on iTunes you'll be able to purchase Fucked Up's star-studded cover of Band Aid's Do They Know It's Christmas? All proceeds will go to benefit three organizations in Canada working to bring to end to the epidemic of missing and murdered native women.

Fucked Up's frontman Damian Abraham, a.k.a. "Pink Eyes", says "it's hard to find a balance between the song being a fun, playful holiday classic and the reason we're putting it out, to benefit organizations dealing with a deadly, serious issue." Since 1980, there have been 520 known cases of missing or murdered Aboriginal women across Canada and many believe the true number to be significantly higher. If compared to the rest of the population their death and disappearance rate would be equivalent to over 18,000 Canadian women and girls missing or murdered. Approximately 50% of the murders and disappearances have occurred during or since 2000.

The three groups that will receive 100% of the proceeds from sales of this song are Justice for Missing and Murdered Indigenous Women (Montreal), DTES Power of Women Group (Vancouver) and Sisters in Spirit (Ottawa).

The recording of this track was funded in full by a portion of the $20,000 award Fucked Up received for winning the Polaris Music Prize for their recent album, The Chemistry of Common Life.

‘Do They Know It's Christmas?’ should be available from iTunes on Tuesday December 8, and will be released as a 7" single with an unreleased Fucked Up song on the b-side in February 2010.

Fucked Up are also releasing a compilation of their many rare singles recorded between 2002 and 2009, Couple Tracks, accompanied by a two-song limited-edition 7" and in stores on January 26. 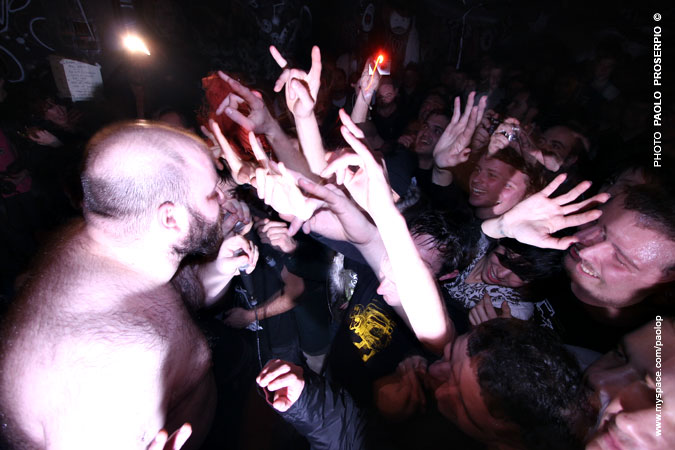 Photo by PAOLO PROSERPIO at the Milan show last week.

In what feels like their 400th show of the year, Fucked Up will once again be hitting London tonight with the final show of 2008 for the band, and for Matador UK.

Tonight will be a Christmas Party of sorts, with tinsel and party hats. There'll also be a charity give away tonight of some of the remaining Royal Swan 7"s from the 12hr show. Money donated for a copy will be going to selected London-based charities.

And we didn't tell you, but if you happen to be in the Shoreditch area of town at around 12.30am tonight, there's a distinct chance you might catch an additional FU show at the Old Blue Last. But you didn't hear it from me. 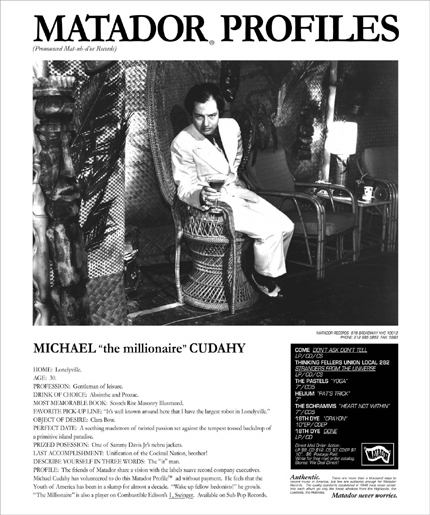 Here you can see the ultra-suave Michael Cudahy, singer and main songwriter in Boston's Christmas, whose album Vortex we released in 1993 (by which time the band had relocated to Las Vegas). Later he was in Combustible Edison, over whom we will politely draw a curtain. He also nearly beat Jeopardy contestant Ken Jennings, the 17-show champ, on June 25, 2004. In the early 1980s he helped start the legendary artist-owned label Propeller Records, which released important records by the Dangerous Birds, V;, the Neats, Art Yard, CCCP-TV and many others. (Sadly the Propeller masters were all destroyed in a disastrous fire at Cudahy's house in Allston many years ago, so HA HA there will be no digital reissues.)