Two weeks away from the release of Savages' hotly anticipated 2nd album, 'Adore Life', the band present a stunning video for "Adore", directed by Anders Malmberg (with lighting and concept design by Tobias Rylander). Savages' initial run of 2016 worldwide dates are updated below with the addition of a rather prominent spot on Friday bill for both weekends of the Coachella Valley Music and Arts Festival.

preorder ' Adore Life' from the following with "Adore", "T.I.W.Y.G." and "The Answer" available instantly

Below find the details on where to catch Matador bands during the second weekend of Coachella, which begins in a mere number of hours.

This weekend with have a live broadcast from the festival on the AXS TV Network (with a replay within 24 hours for time zone purposes).

For those attending "Coachella" this weekend find information below on where to catch Matador bands this during weekend 1 of the festival.

Not attending? It's the future and you can can stream sets on youtube.com/coachella and Coachella.com as well as turn into Sirius radio for the live broadcast.


STREAM : Belle and Sebastian - "The Cat WIth The Cream" A day after Belle and Sebastian's participation in April's Coachella Festival was confirmed (see tour dates below), The Line Of Best Fit premiered the third song culled from the forthcoming, 'Girls In Peacetime Want To Dance', "The Cat With The Cream".

'Girls In Peacetime Want To Dance' is out January 19.

If you are at the festival, but sure to catch Queens of the Stone Age tomorrow, April 19th, at 9:35pm PST on the Coachella Stage and DARKSIDE in the aptly-named Gobi tent after at 10:50pm PST. If you are anywhere but Indio this weekend, you can watch many performances (including QOTSA) on AXS TV here (please check local listings) or watch it on your computer at AXS.tv.

The first weekend of Coachella 2014 is underway! Catch Queens of the Stone Age TONIGHT, April 12th, at 9:40pm PST on the Coachella Stage and then RUN over to Gobi to catch DARKSIDE at 10:50pm PST. Portions of the festival are streaming live on YouTube, including tonight's QOTSA set.

GIRLS perform on CONAN + then again at COACHELLA

Long time fans, first time performers!  Last night Girls were able to stop by Conan for a very special appearance, their very first on his show.  Those who tuned in were treated to a heartfelt rendition of Love Like A River.  For anyone who missed it, the good folks at Conan have provided this clip from the show.

Girls are now headed into the desert for a special show at Pappy & Harriet's tonight in Pioneertown, CA and then hit Coachella tomorrow for the second weekend of madness. 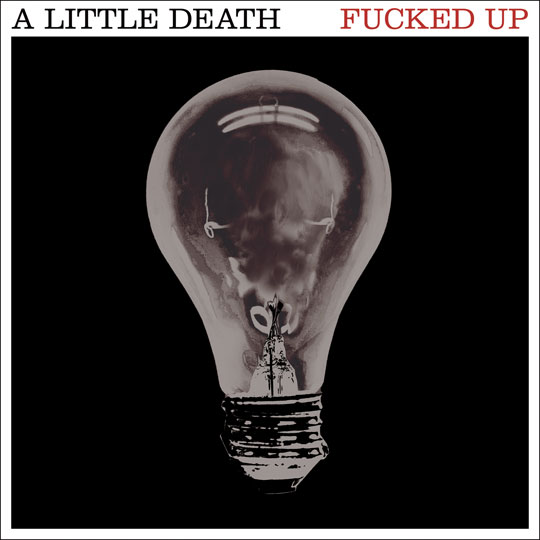 Today Fucked Up release the second of four singles from the upcoming album David Comes To Life. Entitled "A Little Death," the song is track 13 out of 18. Its urgent tone plays against an underlying tale of resignation and defeat, and showcases a different side of this insanely multilayered album from the first single released a couple of weeks ago.

Appropriately enough, the band will be celebrating the release of this (sad?) single with a free show at the ACE Hotel in Palm Springs after Coachella ends tonight. They will be performing multiple songs from the new album. Doors open at midnight. Come and get a free postcard containing more information on the story.

If you can't make it out to the desert, catch them at the Echoplex in LA tomorrow night. Tickets are only $5.

* To avoid confusion, these singles are DIGITAL singles. There will be plenty of REAL singles coming for you collectors.

Stay tuned for the release of single number 3 on Tuesday, April 26. As announced on the official Coachella page, stage times are out now for all bands playing this weekends festival and you'll find Matador and True Panther bands well represented, without any clashes (...hopefully) too!

Surrounded as we are by an ever-increasing number of cameras in our daily lives, we begin to lose ownership of our own images. Anonymous technology is analyzing, categorizing and archiving our very existence.

Interpol, in collaboration with David Lynch, Andi Watson, HPX and Wieden & Kennedy present a visual juxtaposition of the seen and the unseen. As the observer becomes the observed, the performance explores the deepening layers of covert surveillance, morphing data acquisition into visual beauty and questioning the fine line between the viewer and the voyeur.

Featuring the premiere of the David Lynch animation "I Touch A Red Button Man" for the song "Lights", and utilizing real-time visual manipulation from Seattle-based HPX, the performance will be streamed live to the internet as well as to the audience at Coachella.


From here Interpol continue their tour around the southern states with School Of Seven Bells, The New Pornographers head out with the Walkmen in tow, Cold Cave join the Kills on the road, Glasser will be supporting TV On The Radio, whilst Delorean bring their broken Spanglish charm to headline shows in Chicago and Brooklyn.

The Coachella stages and times for all our acts are below, enjoy!

Fucked Up: "A Little Death" single release party at the Ace Hotel during Coachella 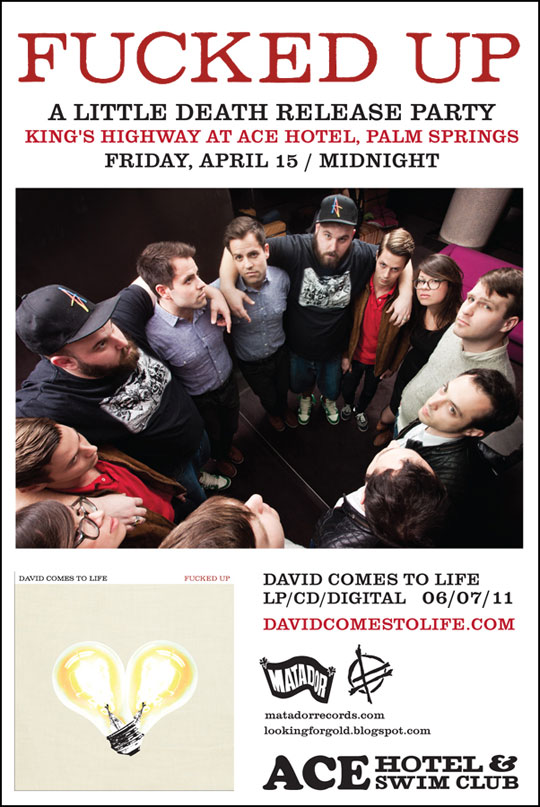 To celebrate the release of the second of four singles from their upcoming album David Comes To Life, Fucked Up will be playing a midnight show at the Ace Hotel in Palm Springs on Friday, April 15. This is of course during the weekend of the Coachella Festival. The digital single is called "A Little Death" and will be available both here on the Matablog and on iTunes on that Friday.

Though the above poster is not entirely accurate, we can finally confirm (ie. after everyone else has already reported it) the following members of the Matador / True Panther Sounds family will be appearing at The 12th Coachella Valley Music & Arts Festival this coming April 15-17

As for the rest of the bill, well, we all have our favorites, but I'd like to issue a deep personal thank-you to the organizers for NOT BOOKING THESE DUDES.

For those of us who didn't spend the weekend baking away in the Coachella sun, a friend of the Matablog sent along some photos of our first experiment with skywriting. To celebrate Stephen Malkmus and The Jicks' performance we emblazoned the skies with their name. It went so well that we'll be floating triumphantly above every summer festival this year! Keep an eye on the sky!

Incidentally, we are currently running a Stephen Malkmus Bundle Sale. You can get all 4 Stephen Malkmus and the Jicks CDs (Stephen Malkmus, Pig Lib, Face The Truth, Real Emotional Trash) plus a free rare 7" flexi of "Jojo's Jacket", all for $40. Supplies of the flexi-7" are very limited.