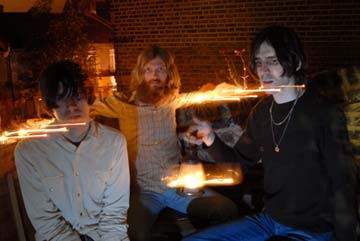 It's a long story but we came to the conclusion a 1:30pm start time on Saturday was a bad bad bad deal for the participants and everyone who'd been rocking Friday night combined. Our apologies for any inconvenience. Also, the event is now officially totally sold sold.
·

REVISED SCHEDULE : Matador At 21 : The Lost Weekend In Las Vegas, The Palms First off, if these changes have left anyone disappointed or inconvenienced, we're truly sorry.  I've been watching videos of the guys in the BP commercials all week trying to strike the right tone for this post, and wouldn't you know it, MY VIDEO CAMERA IS BROKEN.   Bullet dodged.

On the bright side, hey, DEAD MEADOW are playing.    The opening VIP gala is still happening at 4pm Friday in the Hardwood Suite with dj sets by Ted Leo and myself.  Same room becomes a VIP lounge Friday and Saturday nights, plus late night dj action on Friday (James McNew, Dean Bein) and Saturday (Dave Martin, Robby Morris).  Here's the live entertainment schedule of events.  Much like real life, everything is subject to change.

KARAOKE UNDERGROUND AT LITTLE BUDDHA:
STARTS AT 1:30am

This event is sponsored by MySpace Music, Altamont, Incase, Sailor Jerry and Yowie.

What they're up to: Kathryn Calder, Mogwai, Dead Meadow, Matmos

Even though we'd been convinced that all that slaving away at the myriad marketing gimmicks, "promo opportunities" and general suffering we put bands through would leave us with some very exhausted talent, it turns out that these guys just can't stop doing thangs... read on to see what some of our beloved have been up to.

Though she's on tour with the New Pornographers, as we speak, Kathryn Calder just put the finishing touches on her new solo record.  On August 11 the world'll be treated to 'Are You My Mother?' which features an all-star band featuring Neko, Kurt and Todd from The New Pornographers and a handful of other Canadian musical luminaries. Check File Under: Music for more info.

Mogwai will be releasing the pretty stunning looking live LP entitled, 'Special Moves' to coincide with the release of their first live film 'Burning', which was filmed in Brooklyn during the band's tour in support of 'The Hawk Is Howling' in April of 2009. Check Mogwai's site for info on ordering the record and where you can catch screenings of 'Burning'.

Following the release of their live-film, Dead Meadow released their second live album 'Three Kings' and soundtrack to aforementioned film, on the Xemu label in April. 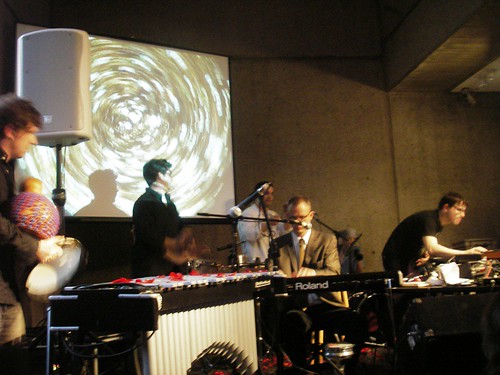 Matmos and So Percussion shot by maggiemoo1

Matmos' Drew Daniel and Martin Schmitt have teamed up with So Percussion on a collaboration entitled 'Treasure State' -- expect to have your mind twisted on July 8. Cantaloupe Records sez: "The record had a complex gestation period: at the invitation of Brett Allen, the members of Matmos and So Percussion went to the SnowGhost Studios in Whitefish, Montana-- the Treasure State which gives the album its title-- and collaboratively generated the bulk of the songs. San Francisco plunderphonicist Wobbly then chopped and edited the results on several tracks, and finally, with frequent interventions from Matmos' M. C. Schmidt, "fifth" So Percussion member and producer Lawson White overdubbed extra elements, processed, and mixed the results." There's a handful of live dates, to boot! 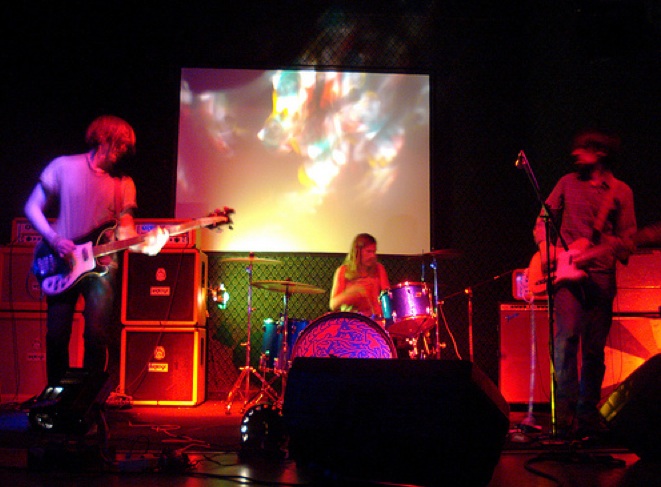 Possibly The Greatest Music Film Since "Tougher Than Leather" 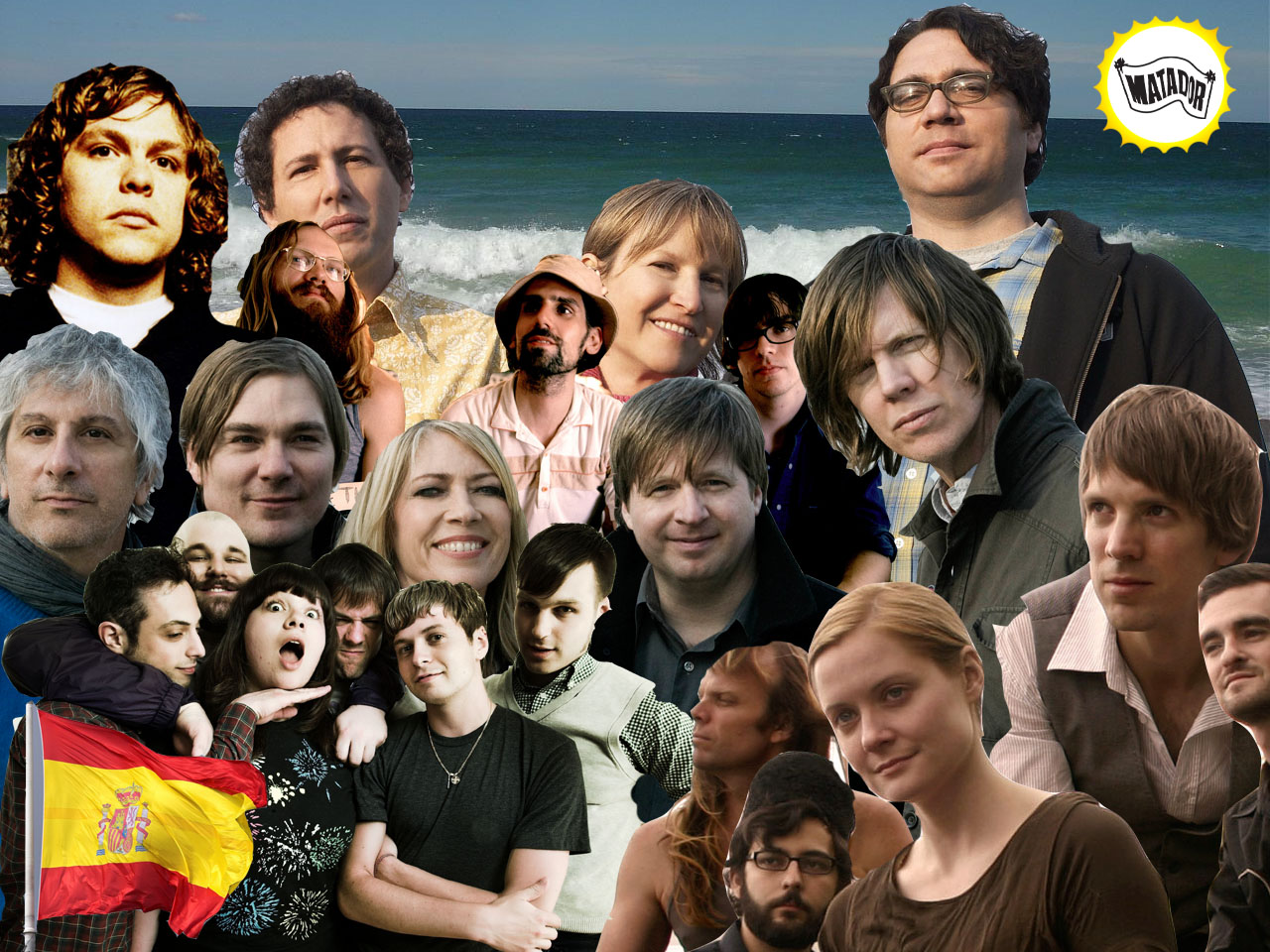 Now that's what I call a beach party...

Tomorrow will see the start of this year's Primavera Sound festival, in Barcelona Spain.  Set on the sea front on the edge of Barcelona, the festival has stages curated by Pitchfork, ATP and Vice amongst others.

This year Matador has a total of 6 bands in attendance at the festival.  Surely a record? If you're attending, be sure to Sharpie these times on your hand now:

A prize will be awarded to anyone that manages to get a photo of all of the above in the same place at the same time.

Tonight At Austin's Alamo Ritz : "Such Hawks, Such Hounds"

There's some prominent Dead Meadow and Bardo Pond participation amongst other faves in John Srebalus and Jessica Hundle's documentary "Such Hawks, Such Hounds", playing tonight at 10:15 as part of the Alamo's Music Mondays series. And hopefully hitting your town before long. 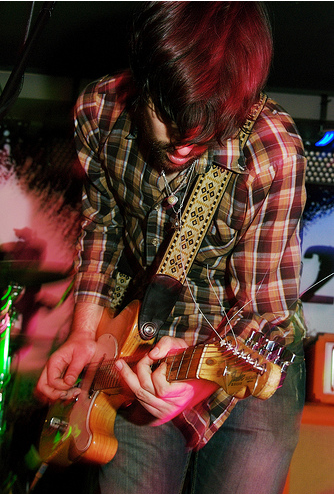 indeed, "cheaper than a movie" (in Hollywood, anyway), unless you're heading for the dollar theatre to see Quinton "Rampage" Jackson's star turn in "The Midnight Meat Train".

Manch?ester? on Sept 14th has been moved? from the Roadh?ouse to Night? and Day Cafe.? Flyer above for the London show. Thanks to Howard Monk for this.

Dead Meadow vs. The Golden State 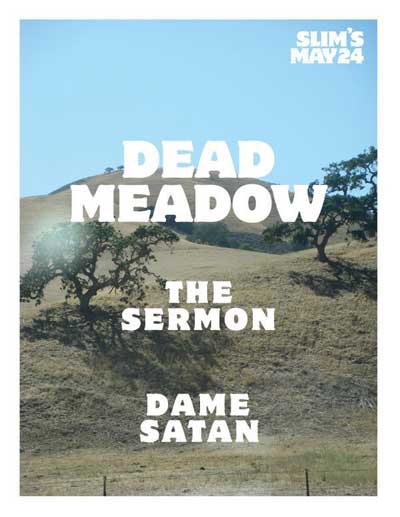 You get TWO chances to see Dead Meadow this weekend!

2. Later that night at The Abbey!

Dead Meadow is going to play a Free in-store at the Apple Store on North Michigan Ave in Chicago!

I know for me, every day is Record Store Day, but now there is an official day to celebrate independently owned record stores and it is this Saturday, April 19th! RECORD STORE DAY!

For the first time, we're making our annual 'Intended Play' label sampler available digitally. Click on the link to get a zipped file of all 12 tracks plus front and back artwork, and burn it yourself (or just listen to it digitally):

1. Jay Reatard Always Wanting More (from 7" #3, due out June 24)
2. Times New Viking DROP-OUT (from Rip It Off, released January 22)
3. Stephen Malkmus & The Jicks Cold Son (from Real Emotional Trash, released March 4)
4. Shearwater Leviathan, Bound (from Rook, due out June 3)
5. Cat Power Metal Heart (from Jukebox, released January 22)
6. Matmos Polychords (from Supreme Balloon, due out May 6)
7. Mission Of Burma That's How I Escaped My Certain Fate (from Vs.: The Definitive Edition, released today, March 18)
8. Jaguar Love Bats Over The Pacific Ocean (from Take Me To The Sea, due out this summer August 19)
9. The Cave Singers Helen (from Invitation Songs, released last September)
10. Dead Meadow I'm Gone (from Old Growth, released February 5)
11. The New Pornographers All The Things That Go To Make Heaven And Earth (live) (from Live From Soho (iTunes Exclusive), released March 11)
12. Earles & Jensen Bleachy Is Back In Town, Look Out (from Just Farr A Laugh Vols. 1 & 2: The Greatest Prank Phone Calls Ever!, due out April 22 May 6)

The sharp-eyed among you will note that some of these tracks are not the ones released as promo MP3s to date.

Dead Meadow get got.