Today marks the 25th anniversary of Yo La Tengo's "From A Motel 6" being released as a single thru the confusing maelstrom of the major label distribution system. It's also Ira Kaplan's birthday, and to celebrate both of these historic events we're offering 25% off 'Extra Painful' and 'There's A Riot Going On'. Stream "From A Motel 6" and find your territory's Matador Webstore 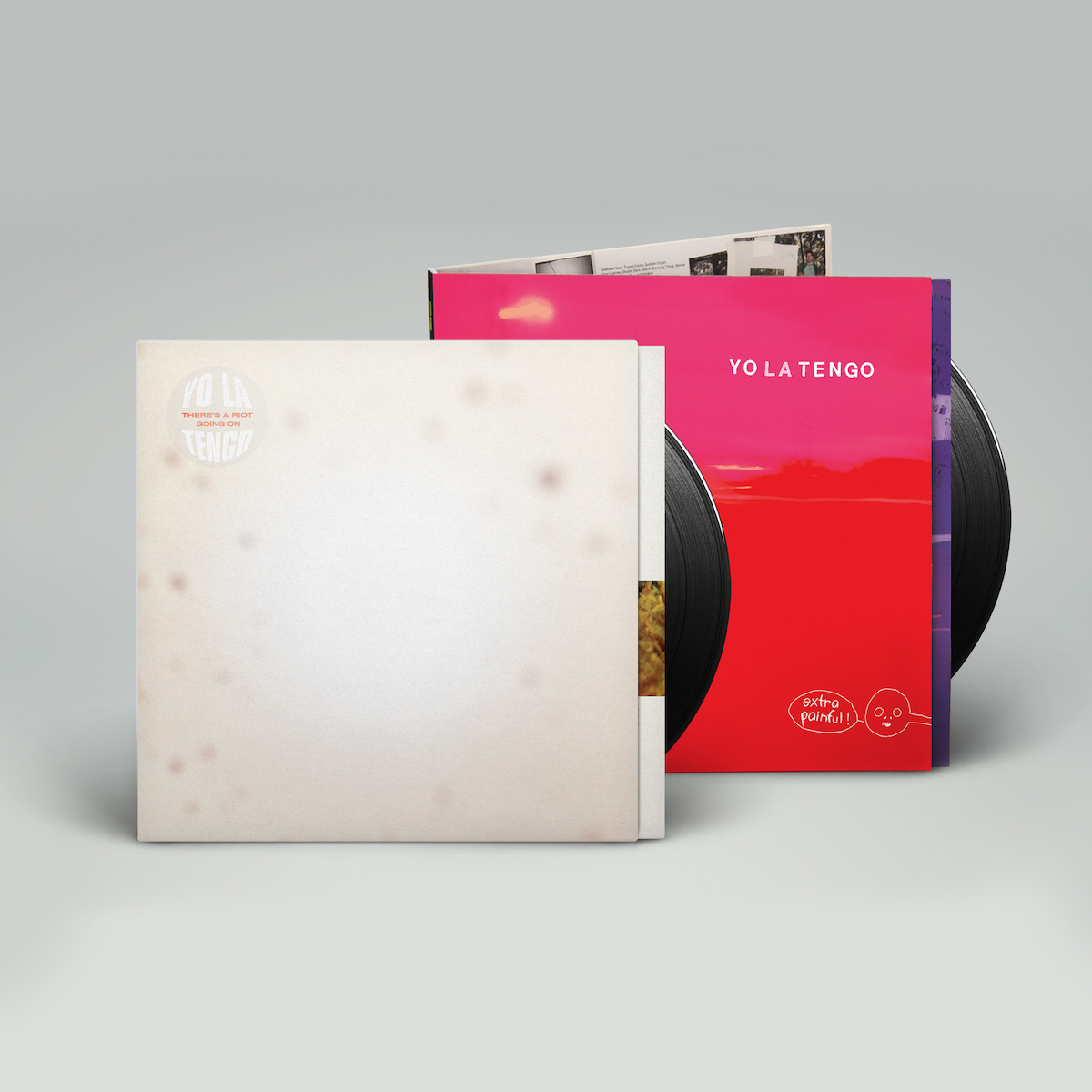 Yo La Tengo On Tour :

Cold Cave &amp; The Kills: Get The Albums With Your Tickets!

Earlier this week we announced Cold Cave's North American tour with The Kills this Spring.

Starting this Friday Matador will be partnering with The Kills' record label Domino and Ticketmaster to give you the option of upgrading your ticket order to include either the new Cold Cave album "Cherish The Light Years," the new Kills album "Blood Pressures" on CD for $13 each* or to bundle both albums with your tickets for $25*.

Go to Ticketmaster starting tomorrow to get your tickets and CDs.

(This album upgrade option is only available at participating Ticketmaster venues along the upcoming Kills/Cold Cave tour. Participating venues listed below in BOLD after the jump.)

*These costs are in addition to the ticket charge.

Mission Of Burma to jump out of Newbury Comics' Giant Birthday cake TONIGHT!

To help celebrate the 30th anniversary of Newbury Comics, Mission Of Burma is going to play at the Newbury St. location tonight at 7:00PM. Sorry about the cake design, but this one was on sale.  Wishing you the happiest of 21st birthdays,  GC

Wednesday marked the 50th anniversary of Mark Ohe's arrival on this mortal coil. His contributions to modern culture --- visual, musical, sartorial --- are somewhat staggering. His role in the rise, fall, rise, fall and jog-around-the-block that is Matador's 19 years in show business, cannot be understated. We wish this quality human being the happiest of birthdays ---- a day after the fact.

What Do You Get For The Men Who Have Everything?

Nils and Zach both celebrated birthdays earlier this week and it seems the tasty Carvel cakes I shipped to each of them ended up melting in the lobby of 304 Hudson St. (something about how the cake didn't have proper ID for security).  Sorry, dudes.

That said, I was able to find the very next best thing in the entire world. Vintage footage of Siege rendering music, video and American flags done and dusted, back in the year 1984.   Don't bother sending me a thank you note --- I already know you're thrilled.

Britain celebrated its first Roald Dahl Day on Wednesday to mark the 90th birthday of the much-loved author of children's classics "Charlie and the Chocolate Factory," "Matilda" and "James and the Giant Peach."

Children and parents across Britain participated with parties and book-readings this week to celebrate the writer, who died in 1990.

A special train ferried fans from London to Great Missenden, 35 miles west of the city, where Dahl lived for more than 30 years.

Guides from the Roald Dahl Museum conducted tours of the town, stopping to read passages from stories and pointed out landmarks that inspired scenes from Dahl's books, including the library where Matilda reads and Sophie's orphanage from the "BFG," the Big Friendly Giant.

Dahl is survived by sons Jeff and Bobby.

In a completely unrelated story, U.S. authorites have cancelled "Ann Marlowe Day" and are investigating links to the author's works and outbreaks of projectile vomiting.

Wishing Ourselves A Happy Anniversary

This week is the 10th anniversary of the commencement of Matador Records Limited. Ten years of fine music unleashed on unsuspecting Europeans (although they were of course getting it before the UK company was set up).

Just think back - one of the first releases for the newly set up company was Cat Power's "What Would The Community Think". The UK was very slow to pick up Cat Power. We struggled to ship over 200 copies. We struggled to get interviews from all those fine UK music    publications (RIP mostly). But the only way was up. Cat Power may not yet have conquered the UK totally but she has a large loving audience here now.

Our French friends were much more on the ball in 1996. They knew what they had. Chan was soon on the cover of France's premier music magazine Les Inrockuptibles playing big sister to Fiona Apple. She immediately became Matador's most successful artist in France - no mean feat against Exile in Guyville's previous success there.

There have been so many great records and so many great moments in the last ten years. Most of those moments have been just shit hot live shows. Thrilling shows from Guided By Voices, Yo La Tengo, Sleater Kinney, Matmos and too many others. It is unfair to mention any specifically as I would be leaving so many out. However I can't resist reminising about a few magical nights like...

- the Garage show by Yo La Tengo around the time of I Can Hear The Heart Beating that was so uplifting it was like a beautiful drug experience
- a Guided By Voices show at the height of summer at the Garage, again, that brought new meaning to the word sauna but was genius (Tobin Sprout, Mitch Mitchell line up)
- a moment of epiphany as GBV played "Motor Away" at Kings College (the Chavez guys going apeshit down the front)
- those joyous Superchunk London shows
- M. Ward at the Hammersmith Lyric - a night of perfection
- Interpol slaying Brixton Academy two nights in a row (actually the wired, fast set played at the ICA has to be my favorite)
- Burma being Burma at the Garage and ICA
- Cat Power (those special magical nights like Cafe de la Dance in Paris, Queen Elizabeth Hall, Union Chapel, Barbican in London)
- highs and lows of Pizzicato Five at the Roskilde Festival
- first time seeing Guitar Wolf play London probably at the Dublin Castle if memory serves me right.
- Arsonists do their thing on stage
- Zeitgiest riding with Fantsma and the first UK show by Cornelius and Solex at the tiny Eve Club with the speaker threatening to crush half the audience
- the Cornelius show at the Royal Festival Hall...... and so on

The music and people are so intertwined - such as drinking endless coffees with and listening to Monoman prior to a stunning Lyres show at the Dirty Water Club. Visiting Peel Acres with Solex, Cat Power and Wisdom Of Harry and the hospitality, wine and conversation post broadcasts. Being able to give Interpol their justly deserved gold and silver discs. None of us having a heart attack during or after three days and 15 bands playing the tenth anniversary in London.

I honour those who have served their time and now have been released into the community Rob, Shane, Helen, Sarah, Alan, Janis.

Thanks to Lucy and Rauiri, everybody on Matador NYC, to our friends at Beggars all over the world but most thanks Gerard, Chris and Patrick.

We hope to be staging a celebratory screening soon of the Almodovar film "Matador" in London to mark the decades passing. Those in the know know why.

This Date In History Dept.

Were they still alive, today would mark the 74th birthday of Ted Cassidy ("Lurch" from the Adams Family) and the 62nd birthday of Nico.

Former US Secretary of Education William Bennett, however, celebrated his 63rd birthday today. Presumably, he's not touched the milk money, though it is a very special occasion.