Split singles are usually the byproduct of shotgun marriages and/or sleazy cash grabs by labels eager to exploit even most the  tenuous connections between two entirely unrelated artists. BUT ENOUGH ABOUT OUR JICKS/LA GUNS single!
For entirely different reasons we're not getting more records from the late Jay Reatard or the splitsvile-population-them Sonic Youth and it would be the height of exaggeration to claim this 2009 curio is a highlight of either's vast discography. But that's what Matador Revisionist History is all about, exaggerating heights!  Primo Carnera might've been 6' 5 1/2 inches tall in reality, but look the fuck out for 7-foot tall Primo Canera appeals to the PT Barnum, PT Cruiser and PT Anderson in us in equal measures.
Also, maybe you slept on a chance to buy it the first time.
Purchase Split Color 7"/Stream "Hang Them All" / "No Garage"

(All profits from this release will be donated to St. Jude Children's Research Hospital)

Coinciding with the reissue of the 7", to commemorate the 10 year anniversary of Jay Reatard's Watch Me Fall, take 25% off the LP on the Matador webstore worldwide through August 8th. All orders of the album will receive a Matador Revisionist History slip mat while supplies last.

Stream/Purchase 25% off Watch Me Fall Danish premiere of the Jay Reatard film Better Than Something - August 30th. 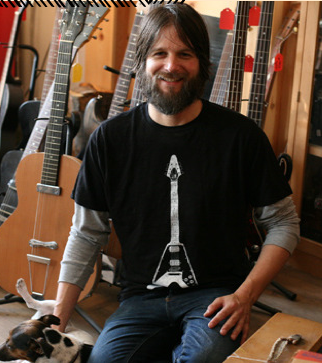 As some of you already know, last week marked the 2nd anniversary of the death of Jay Reatard.  The insensitive-rock-history part of me sometimes thinks of the big pile of records he'd have otherwise made in those 24 months, but most of the time I think about the guy his friends and family miss so much.  This morning, we were given a virtual elbow in the ribs by the folks at Yellow Bird Project, who are hawking a Jay Reatard shirt to benefit St. Jude's Children's Research Hospital.  The shirt features a Flying V w/ the Gibson logo replaced by Jay's initials.  So it's subtle --- you can buy one for someone who hated Jay and tell him or her what the deal is after they've been wearing the tee for a year. Thanks to Ruben Cox for the link.

This Thursday (March 18) in Austin, TX a fantastic collection of bands from near and far will be performing at Beerland in loving memory of Jimmy Lee Lindsey, Jr aka Jay Reatard

We've been asked to post this publicly so that everyone who cared about Jay can attend.

I never thought I'd be writing something like this. We miss you so much, Jay.

We are devastated by the death of Jimmy Lee Lindsey Jr., aka Jay Reatard. Jay was as full of life as anyone we've ever met, and responsible for so many memorable moments as a person and artist. We're honored to have known and worked with him, and we will miss him terribly. 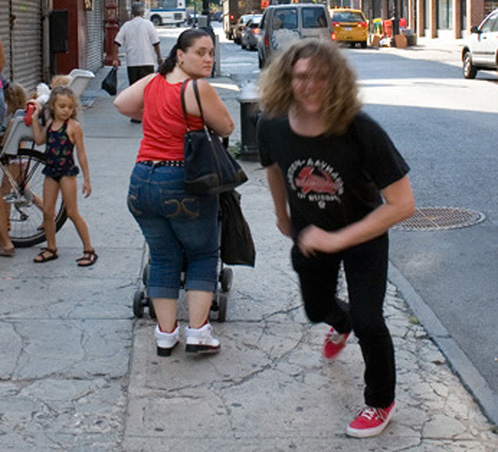 I was on a flight to NY this afternoon and when I landed there were about two dozen text messages about Jay Reatard's passing. It is the height of understatement to say I'm upset, confused and deeply saddened by the loss of one of the more amazing people I've been fortunate to know.  In record company parlance, yeah, we've lost (let's go down the checklist) a phenomenal performer, songwriter, and insatiable music lover.  But we've lost a great friend as well, and that's the part that hurts the most.

We're not the only ones feeling that way right now, obviously. Jay's friends all over the country, heck, all over the world are dealing with this. I know his various scrapes over the years have made for cheap internet fodder, but the people who cared about him are gonna remember a real person that mattered to them.  Our thoughts are with that very large group of people this evening.

Jay Reatard - "Waiting For Something"

In the lead-up to the release of Watch Me Fall last year, this documentary was shot by Alex Hammond & Ian Markiewicz.

As we mourn Jay's passing, we thought we'd again share the film as we remember Jay's life.


Waiting For Something - a short documentary about Jay Reatard

Jay Reatard - "There Is No Sun", Live At Criminal Records

Things got a little out of hand during a Criminal Records (ATL) instore earlier this week when dozens of shoppers were whipped into a frenzy by one of the more controversial, polarizing performers of our era.  But enough about Wyclef Jean's visit to Euclid Avenue, Jay Reatard's performance yesterday was yet another public demonstration of genius-level songcraft.  And there's more to come along the tour route.     ('Watch Me Fall' - available on LP, CD and digital files from The Matador Store)

As much as Jay enjoys hanging out in record stores, he apparently loves playing OUTSIDE of them even more.
Stop by Vinyl Richie's Wiggly World at 2:30pm this Saturday for a very special out-store by Jay and his new band as they take over Richie's parking lot for a free, all ages rock show. 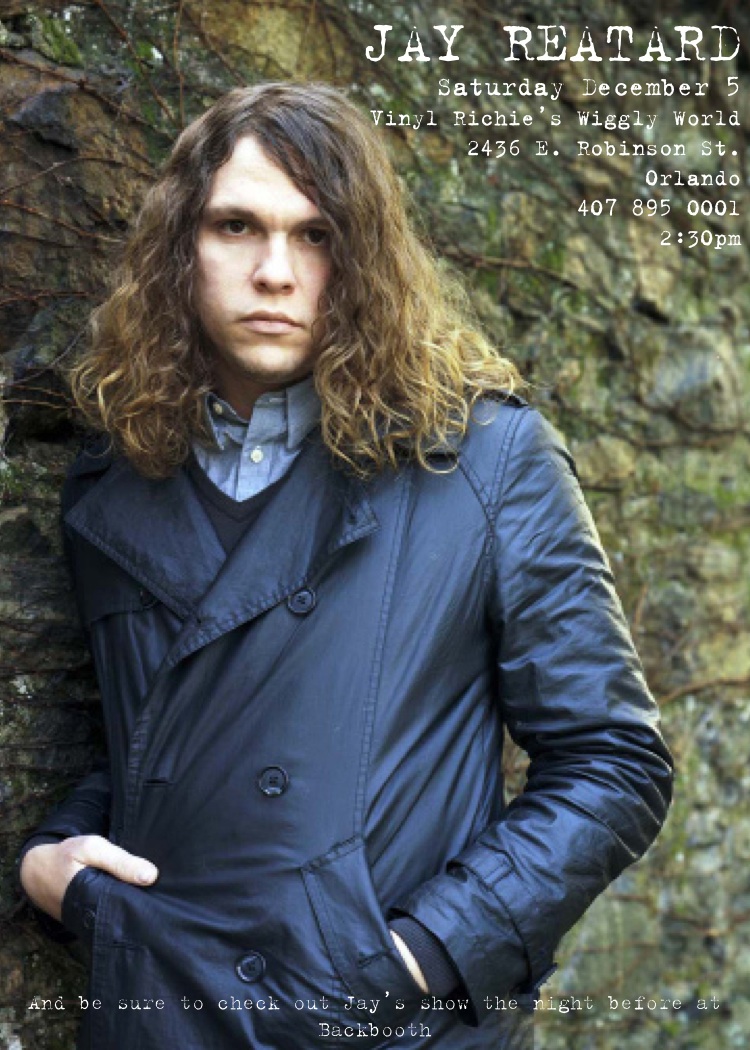 Anyway, next Thursday December 3rd Jay Reatard and his brand-spankin-new band will stop in Criminal Records in Atlanta for a very awesome, very free, very all-ages instore... come kick it.

Starting Saturday, Jay Reatard is back in the States shredding clubs from Chicago to Dallas and everywhere in between (and East of the Rockies to be totally clear). And on a couple of key dates, Jay will be sharing the bill with The Pixies. For all of them though he'll be sharing the stage with Anders Thode (bass) and Jacob Elving (drums) of Cola Freaks fame. The three of them just finished touring Europe together and if the video above (filmed by our very own Natalie Judge) is any indication, they've taken to one another quite well. Be sure you check them out for yourselves when they roll through a town near you. And if bringing in 2010 with Jay Reatard seems right up your alley (apparently it's up Spoon's) then make sure you're in Milwaukee on Dec 31st.


With the Cola Freaks guys now fully inaugurated in the band, the Jay Reatard tour bus rolls into London tonight.  Only a few more UK dates left, so use your weekend wisely.

Finally, although the Jay Reatard live experience is a bit different these days, nothing can diminish the power of the old lineup. Their Pitchfork session wraps up today. Watch "Hammer I Miss You" below, or click here for the full session.

Stephen and Billy's last stand, we're happy to have this one for posterity, but here in the UK we're also looking forward to checking out the NEW BAND (!!) this week. Find tour dates below the video, and buy Watch Me Fall here.

Jay Reatard on the cover of Death &amp; Taxes

Our own Jay Reatard graces the cover of the latest issue of Death & Taxes. The issue itself is actually interactive, no jk. Check out what I mean here and look for the magazine on stands - it's worth the price of admission for the pictures alone. Buy Watch Me Fall here. Jay Reatard and his new band are starting their European tour tonight in France, all the dates can be found below. As previously billed, he's playing with the Cola Freaks as his new band and by all accounts they're raring to go as this statement from Mr Reatard attests...

"Life has been great since I've been here in Aarhus (Denmark) the last ten days. Working on music all day, walking a half hour to the rehearsal studio, playing with the Cola Freaks all night.  With the last band it was all overplaying - turn it up, play it fast - but the songs got lost in all the distortion. This new band makes the songs in a way sound more pure by scaling back and putting more emphasis on the melody and the changes. It sounds exactly the I wanted these songs to sound like live when I wrote them.

We added a lot of new songs to the live set. There's already been a secret show in Aarhus before we start a 12 country European tour before coming right back for those Pixies shows.  Can't wait for those.

I also recorded a cover of Chris Knox's first band The Enemy - a version of "Pull Back The Shades" for a Chris Knox tribute album.  I did it right in the bathroom of my hotel room here - put the computer on the sink, recorded the guitar and vocals sitting right on the toilet!" 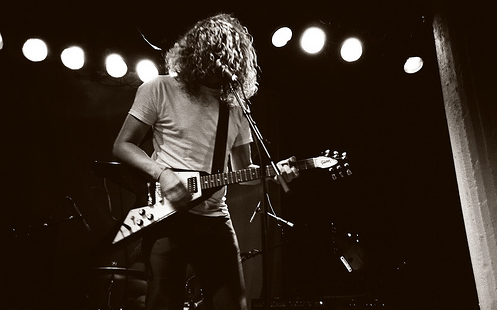 Followers of Twitter and some of the more popular rock blogs probably read recently that bassist Stephen Pope and drummer Billy Hayes had left Jay Reatard's touring band ; while said move required the cancellation of some dates on the West Coast, we're happy to announce Jay will be back on the road shortly, hitting Europe next week and the U.S. in late November, with the newly ensconced rhythm section of Anders Thode (bass) and Jacob Elving (drums), both from Danish punk titans the Cola Freaks, along for the ride.

You'll note from the dates below that Jay is opening for The Pixies in Chicago, New York, Boston and Washington D.C.   There's also a New Year's Eve date supporting Spoon in Miwaukee.

If you're looking for a weekend fest roughly three weeks after Goner 6 and a week before Budget Rock 8, you could do worse than the above event.  It could the greatest car-company sponsored event of all-time (though admittedly, I would struggle to name the 2nd and 3rd place finishers).

After a day off, Jay Reatard's FREE, all ages, West Coast, Record Shop Tour (try saying that 5 times fast) is back in action tonight. If you're in Portland, OR we highly recommend you swing by Jackpot Record's downtown store at 6pm. Everything we're hearing from fans, record store owners and Jay himself is that these in-stores have been really fun, really loud, and really crowded. And well why shouldn't they be. Jay's got a terrific new album to celebrate and is one of the best performers around these days.

And a reminder for all of you in the Northwest, Jay invades a city/record store near you this week. You've been warned!