This thiyal is an adaptation of a Keralan shrimp recipe. The curry is made with a dark, sour sauce of toasted grated coconut, tamarind and browned onion. Like many Keralan dishes, it is anointed at the end with an oily stir fry of dried red chiles, curry leaves and mustard seeds. It's deeply complex & satisfying.

The original recipe is for seafood which makes me wonder whether it didn't call for kodampoli (also known as "fish tamarind") rather than regular tamarind. The recipe comes from Maya Kaimal's Curried Favors, which doesn't ever call for kodampoli though it is a common ingredient in this part of India. I served it with spinach pachadi from the same book. This is a failsafe recipe - easy and delicious. The coolness of the yogurt plays off the spiciness of the chiles. The earthiness of the spinach and curry leaves permeates the entire mixture. 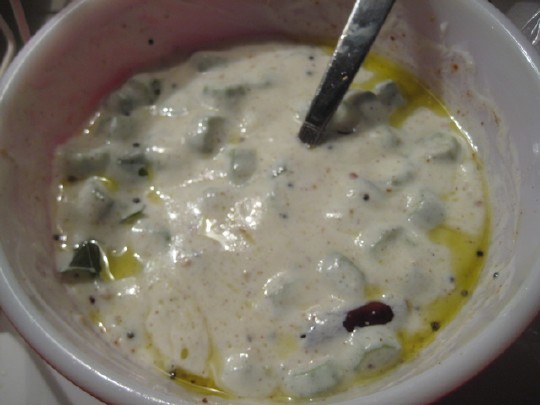 This is a hearty, homey chicken stew. Like many Keralan dishes, it uses spices like black peppercorns, cloves and nutmeg and thus feels strangely Western... because we imported those spices from Kerala, from the sixteenth century onward. The main non-Western ingredient is coconut milk - I used canned, because I wasn't up to hammering open the 16-20 dessicated supermarket coconuts it would have taken to yield that much milk. Doesn't it look delicious? But that isn't actually it - all the pictures of the stew turned out murky, so I put in the Keralan okra salad that I served with it - the creaminess there comes from yogurt.

I really enjoyed this dish - another winner from Madhur Jaffrey's sadly out of print A Taste Of India. But it didn't come close to her recipe for lamb in pickling spices, which I made the following day. It turned out much better than it did last year - I'm much more comfortable with the whole process of cooking Indian than I was then.

One thing I've noticed in Indian food, and especially Keralan dishes is that you often start by cooking something with a main ingredient, setting aside that first part, and then re-adding a different version of the main ingredient again at the end. In the okra recipe, you fry the okra in seasoned oil, remove it with a slotted spoon (reserving the oil), and mix it with yogurt that has ground black mustard seeds in it. Then you take the reserved oil and fry whole black mustard seeds in it (with asafetida and dried red chilis) and add this to the yogurt-okra mixture. The black mustard returns, in a different form, with the okra-infused oil, at the end of the preparation.

I don't know why cookbooks don't tell you the reasons why you do things. You usually pick up on this stuff after preparing a number of dishes a number of times. This particular theme - adding a variant of an ingredient toward the end of a dish, in a different form - seems to me quite common in Indian cuisine. 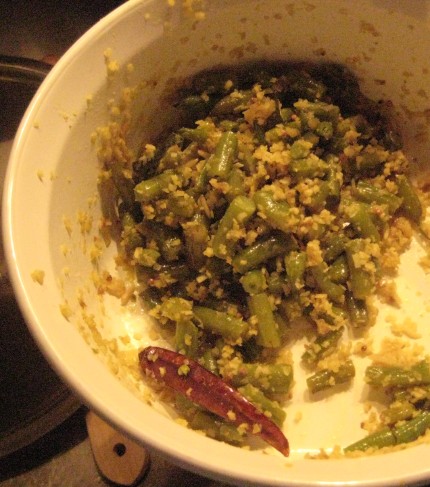 This dish from Kerala is a thoran, sort of a warm salad. It's pleasingly bitter, sweet and fresh-vegetably all at once. I fried the beans in raw organic coconut oil from Bonobo's. The oil is heated and quickly flavored with mustard seeds, fresh curry leaves, dried red chilis and a small amount of uncooked white rice -- rice is used as a condiment in Southern Indian food. The beans saute in the oil for 2-3 minutes, and then you move them to the sides of the pan in a donut shape and put a mountain of chopped vegetables, herbs and spices in the hole in the center: shallots, garlic, ground cumin, turmeric, green chilis and grated fresh coconut. The beans are mounded over the ingredients, water is added, and the beans are then steamed through the pile as it were for 10 minutes or until done.

We served this Madhur Jaffrey dish with Julie Sahnee's tandoori chicken. I broiled it rather than roasted it and it came out a bit dry and charred, but still flavorful. Last time I made it into chicken makhni and I think that's what I'll do next time. An assortment of pickles and chutneys, plus Jaffrey's apple-cumin-ginger yoghurt, rounded out the meal.

I've posted about this dish before, but it's my habit to keep cooking dishes I enjoy until I really understand them. Plus no pictures last time.

This is another recipe from my favorite Indian food region, Kerala. More specifically, it comes from the centuries-old Jewish community in Cochin, a religiously tolerant city that was an independent "princely state" under the British and only joined the rest of India in 1947. Not many Cochin Jews still live there, apparently, since they've migrated to Israel. This was a Sabbath dish, and was collected by Madhur Jaffrey from the Kodar family for her 1985 cookbook, A Taste Of India (which is her best so far as I'm concerned).

I said this chicken wasn't spicy when I made it before; since then, I've kicked up both the cayenne and the green chiles and it's far superior. The basic flavor is bitter from the chiles, then sour from the tamarind, and finally sweet/salty from the chicken... with the herbal aromas of the curry leaves.

As with many Keralan dishes, you start by sizzling the curry leaves (highly aromatic, slightly bitter leaves of the kari tree, nothing to do with Indian "curries") in hot oil. You then stir and fry shallots, garlic, ginger and green chiles in the curry-leaf flavored oil until browned (above). You then take a swig of a modish, Eric Asimov-approved Loire non-classified red such as Le Cousin.

You then add tomatoes. Yes, tomatoes! I used crappy off-the-vine ones from the supermarket - you know, the ones that look good and have zero taste. I would have done better with canned San Marzano. Though I think the main role of the tomatoes in this dish is to add color and acidity, so it's not a big deal. 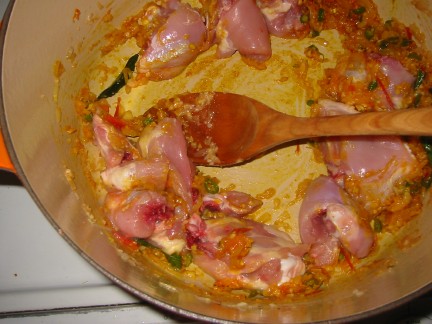 Now add the chicken. Good chicken is a must! In this part of this country, your best bet is Murray's. Far superior to Bell & Evans. Of course, if you live near a farm or a good green market, you may be able to better still. For Indian food, chicken is always skinned, so that the meat absorbs the flavors of the sauce better. The bone is always left in, which of course adds depth and intensity to the flavor. You do have to hack the unboned pieces up so that they're about half a thigh (as above), and a cleaver would be ideal for that, but I don't have a cleaver so I use my chef's knife. I need to get a cleaver. You saute the chicken briefly with the shallot-chili-tomato mixture, plus salt, turmeric and cayenne pepper, add water, cover tightly, and simmer for 20 minutes, stirring once during that time. The picture above is from the stirring once, so about halfway through. Click on the picture to peer deeply into the pot.

Finally, you add some MORE slivers of green chile, cover again, cook for 5 minutes, and then add some tamarind which you have earlier marinated and strained... this is the sour element. You then cook, uncovered, for another 10 minutes to reduce. I serve it with basmati rice and a pungent vegetable dish.

More and more I find myself captivated by the cuisine of the southwestern Indian state of Kerala. It is less sweet and meaty than the cuisines of northern India, and focuses instead on fish, green chilis, coconut, mustard seeds, and oddly, rice used as a seasoning. The tastes are fresh, nutty and crisp, like a breath of cool air. Another ingredient found in most dishes are curry or kari leaves, which have nothing to do with curry but are highly aromatic.

The plate above holds shrimp cooked in coconut milk, a Madhur Jaffrey recipe; I used canned milk (but a reputable brand recommended by Su-mei Yu); it is offset by an ingredient called kodampoli or fish tamarind, which is smoky and sour. Kodampoli is not tamarind at all and is hard to find - I used lemon juice.

The other dish is another Keralan favorite that I've written about here before, okra with yogurt. I could eat buckets of it. 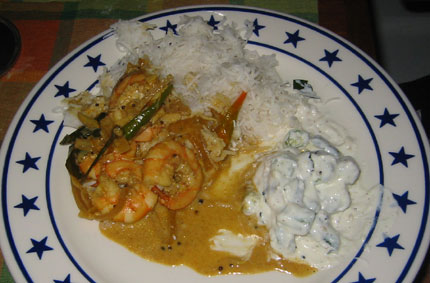 OK, I may have gone crazy with this okra thing, but it's actually a fantastic vegetable. Wholly underrated, Americans have learned to hate it because when cooked with water it loses all its texture and deflates into mush. Indians never allow water to touch okra.

Above is actually a leftovers plate from a dinner I made a couple weeks ago before the Mission Of Burma show in Williamsburg (which was great, if deafening). Both dishes are, again, from Kerala, and feature the ubiquitous kari leaves (or curry leaves - not that there is anything curry-ish about them as we understand that word). The prawns in coconut milk use a substance called kadampoli to add a sour tincture. I was unable to find it; you can substitute lemon juice, but I used tamarind instead. (Kadampoli is also known as fish tamarind, but in fact is unrelated to tamarind, all incredibly confusing.) The other dish is okra that is stir-fried in spices in oil and then folded into yogurt; meanwhile you fry some more spices in the okra-flavored oil and then fold that into the okra-yogurt mixture. It's more-ish. A couple of Madhur Jaffrey classics last night. The green chili chicken is a southern Indian dish from Kerala state, specifically from the Jewish community in Cochin. It was the dish served at Friday night supper, for the Sabbath. Despite the name it is not particularly spicy - the chiles lend it some bitterness. The other key ingredients are the typically Keralan kari leaves and, for sourness, tamarind that has been soaked and strained to form a paste. The chicken is braised, bone-in.

Okra with two mustards is a Bengalese dish, wonderfully piquant and tart. The two mustards are ground brown and yellow mustard seeds, which are used to form a sauce with turmeric, red chili powder, water and a couple of whole green chiles. The okra is stir-fried first in oil infused with nigella seed (kalonji), and then simmered in the sauce for ten minutes - it is crisp and intact this way. Here is the spice mixture for the okra:

I served these dishes with basmati rice, and for cooling purposes and textural contrast, cold onion and cucumber relishes.