Kurt Vile tour dates are selling out, but we have tickets 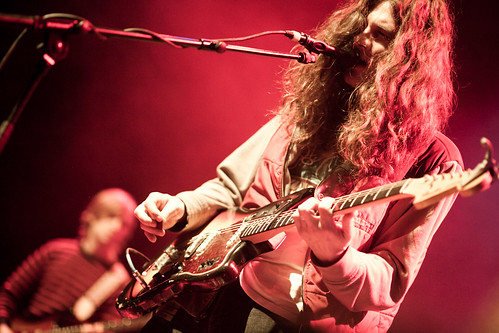 You've already listened to Kurt Vile's new album on NPR, pre-ordered the deluxe 2LP (with stickers!) and perhaps you're even planning a pilgrimage to visit the ESPO Kurt Vile mural in Philadelphia... but if you're one of those folks in San Francisco or New York City who've tried to buy a ticket to Kurt's upcoming live concerts, perhaps the words "sold out" have an all-too-familiar sting. For that, today, we have your salve.

Please click over to twitter and send us (@matadorrecords) and Kurt (@therealkurtvile) a message -- we'll pick two winners in each city at random by 5pm EST tonight.

For those of you in other cities, if you'd like to avoid a similar fate, do yourself a favor and get tickets now. Girls are pleased to announce a North American tour this fall in support of their sophomore full-length, Father, Son, Holy Ghost which comes out 9.13.11. The band is back in SF right now, hard at work practicing away and making sure the live set blows people away come September!

Tickets go on sale FRIDAY check back here or sign up for the mailing list and see if maybe we can find a way to get you a headstart…..

That didn't turn out so badly, did it? From our perspective the paying customers and bands at last weekend's Matador 21 celebrations at The Palms (NOT SHOWN ABOVE, sheesh!) had a great time.  So did we --- ridiculously so.  I think I can speak on behalf of Chris, Patrick and Martin when I say the 72 whirlwind was equal parts humbling, gratifying and inspiring --- the overwhelming majority of performances were scorchers (feel free to rate 'em yourself in the comments area) and we couldn't have been more psyched to be surrounded by such a crazy bunch of friends, old and new, from around the world.  That so many of you went to such lengths to attend this event is not something we're gonna forget for a very long time.

We've got a mountain of people to thank and if I've left anyone out, please take it easy on me BECAUSE MY HEAD STILL HURTS FROM SUNDAY.  To our co-promoter, FYF Fest (Sean Carlson, Phil Hoelting, Mariko Jones) gracias for believing this could actually work.   To our hosts, The Palms Resort & Casino, you couldn't have been more gracious or helpful (especially when you removed the "PRIME RIB SPECIAL" text and replaced it with "MATADOR 21 : SOLD OUT" on the marquee).  Though the auspices of MySpace Music, millions of viewers around the globe were able to see Mitch Mitchell nearly get his lights punched out some amazing shows.  Altamont - thanks for the cool tote bags (and for not cursing us, with, y'know, Altamont-esque vibes) , Incase, thanks for the iPhone cases.  Sailor Jerry, Miller and Black Star --- despite nearly killing a few of us, we're thanking you as well.

Transmission's Graham Williams and Johnny Sarkis performed tireless troubleshooting duties just hours after opening a new venue in Austin, TX.   David Scheid became "THE FIXER" in ways that had no impact on Sunday's NFL schedule, but heroically assisted our efforts over the weekend in ways we can barely quantify.  I've already thanked Nils Bernstein, Gabe Spierer and Adam Farrell privately, so I'll not embarrass them by citing their brilliant work in this public space. Winston Case's excursions into the Matador video vaults might've exposed him to asbestos, bed bugs and VIDEO MADNESS, but such sacrifices kept us entertained between bands. Archivist Jesper Eklow and former design geniuses, Mark Ohe and Frank Longo, helped assemble many of the fantastic materials that were on dazzling display over the course of the weekend.  We thank Zia Records and Origami Records for setting up show in the lobby, and patiently answering my inquiry about that "fuck you" song I've heard so much about (weirdly, that record wasn't for sale).

Our masters of ceremonies for the weekend were thrown to the lions and somehow emerged unscathed ;  Jeffrey Jensen, Bob Nastanovich, Tom Scharpling and Jon Wurster, thank you so much for sparing all 2300 ticket holders the "humor" of Jay Mohr.   On the DJ front, we commend Mike Haliechuk, James McNew, Dean Bein, Rusty Clarke and Dave Martin for supplying excellent pre-recorded entertainment.   Karaoke Underground made their Las Vegas debut late Saturday and Sunday nights and with assistance from such members of the Matador roster as Ted Leo, Sandy Miranda, Ira Kaplan and Georgia Hubley, showed the Matador at 21 attendees what Austin residents have known for ages (ie. K.U.'s shows-are-tops, so thanks, Kaleb & Hannah).

An attempt to do something on this scale wasn't gonna be without hiccups  --- or wild coughing spasms.  But by the time Guided By Voices had concluded their 30 song set early Monday morning, we felt like The Lost Weekend was everything we'd hoped for and a little bit more.  You might feel otherwise, and perhaps someday there will be an open forum of some sort where you can freely express your dissent. Until that day arrives, however, everyone who wasn't there will just have to trust me when I say Matador At 21 Was  A Blast (and now I need a cold washcloth).  To the people who care so much about our artists and label, thank you for sharing it with us.

"The Lost Weekend" - Matador 21 In Las Vegas, Tickets On Sale This Friday, July 9

Tickets for "The Lost Weekend" aka Matador's 21st birthday celebrations at The Palms will go on sale this Friday morning at 9am, PST. Here's the details you've been hassling all of us about over the last week (and don't think we don't appreciate it)

a) Tickets/Pricing : An initial quantity will be on sale Friday for $SOLD. .After the $SOLD tickets sell out, the price increases to $SOLD.  A Ticketfly.com link will be posted on this site on Thursday, July 8th.  Starting Friday, you'll have the opportunity to reserve standard rooms at the Palms for the discounted rate of $SOLD per night (the full 3 nights of the festival, only). The rooms feature two double bed and occupancy of up to 4 persons is allowed. The above rate is only available when purchasing tickets thru us. If you are interested in upgrading to a larger room or a suite you will be able to do so after purchasing the standard room. TICKETS FOR THE 3 NIGHTS  + ROOMS are being sold jointly --- we're not selling tickets to the shows separately at this time, nor are we selling tickets for individual nights.

(ADDENDUM -i) A limited number of 3-day tickets priced at  $SOLD---with no Palms reservation required --- will be available Friday morning at 9am PST  via Ticketfly.com

ii)  if, for example, you're buying 4 tickets to the shows, the $SOLD per night hotel fee can cover up to 4 people.  $SOLD over 3 nights divided by 4 is hopefully not an crazy amount to charge for rooms in a world class resort).

B) VIP tickets. A limited number of VIP packages will be available at $SOLD --- details about what you'll get for the $SOLD are forthcoming. You'll have the ability to upgrade from the regular tickets, assuming the VIP tickets aren't sold out.

C) Venue. The room in question is the 2100 seat Pearl at the Palms.

D) MORE BANDS. OK, we're working on it. But in addition to the 19 artists confirmed on the above poster, we can confirm the original lineup of COME --- Thalia Zedek, Chris Brokaw, Sean O'Brien and Arthur Johnson --- will be participating. Actually, we already know who some of the other bands are, we're just trying to drag this out.    MORE MATABLOG CONTENT between now and October!

E) Set times -  we'll post these the week before the event.

F) These shows are open to all ages.  However, access to the casino floor is limited to those 21 and over.

F) WHAT ABOUT LAS VEGAS HUMANS?  Las Vegas' Zia Records is selling 50 tickets to "The Lost Weekend" starting Friday, July 9.  You'll need a Nevada I.D.  Reservations at the Palms are not required to purchase these tickets.

Tickets will go onsale at both stores at 10:00am on Friday, July 9th via lottery. By overwhelming demand by Nevada Residents we will be increasing the amount of tickets available (50 X 2 = 100) . There is a two ticket limit. Nevada state ID required for purchase. Any questions please email [email protected] 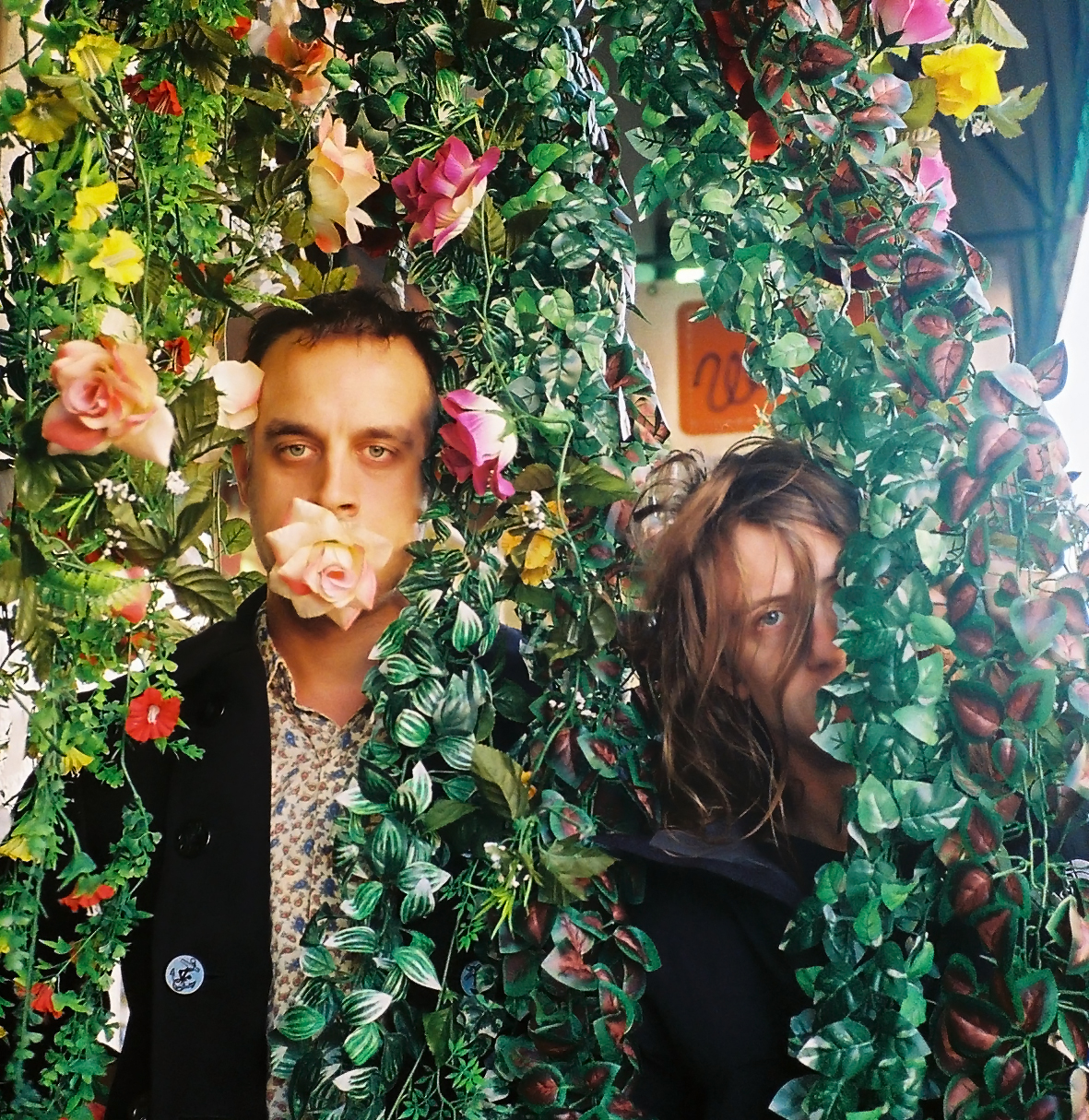 This Sunday, January 31st at 3pm Girls will stop by Cactus Music in Houston for a meet-and-greet and signing sesh...

Cold Cave in LA this weekend, get a limited-edition mixtape

At this weekend's Cold Cave shows, the first 100 lucky attendees will receive a limited edition cassette tape with a mix curated by Cold Cave's Wes Eisold and manufactured in conjunction with the folks at FYF Fest. Rumor has it that these cassettes contain a very special demo recording by Cold Cave but we can't confirm or deny that. You'll just have to find out for yourself. Each cassette is hand numbered and will only be made available at these shows.

Can I Play With Madness Dept. : Maiden Raise The Bar For Fucked Up's Eventual Columbian Tour

I'm pretty sure our favorite Toronto sextet can top this when the time comes.