Design Your Own Love Of Diagrams Tee 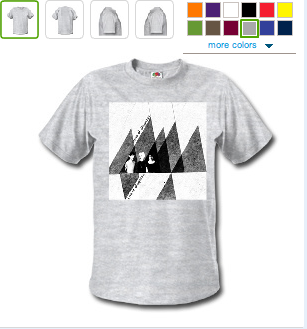 Or hoodie, tank top, shorts or badge.  Love Of Diagrams are currently touring the US with Enon, but if you miss the show and want to make your friends think you actually turned up (hint, hint), this might be the way to go.

Love Of Diagrams - "The Pyramid" video

LOVE OF DIAGRAMS - The Pyramid
Uploaded by krozm
From the album 'Mosaic', directed by Krozm.

Love Of Diagrams - New MP3, Further US Dates With Enon

"The Pyramid" from Love of Diagrams' 'Mosaic' CD/LP is now available for your (free) listening pleasure. If you haven't checked out this amazing Australian trio, well, I'm tempted to say it's your loss for not heading over to their music page. But that's a little vindictive, especially as we're supposed to be a proper business.

If you like what's on offer, we encourage you to either shell out for 'Mosaic' in its full-length glory, or make an appropriate donation to a Matador Records approved charity (perhaps the Institute For Wine Research, 304 Hudson St., 7th Fl, NY NY 10013). 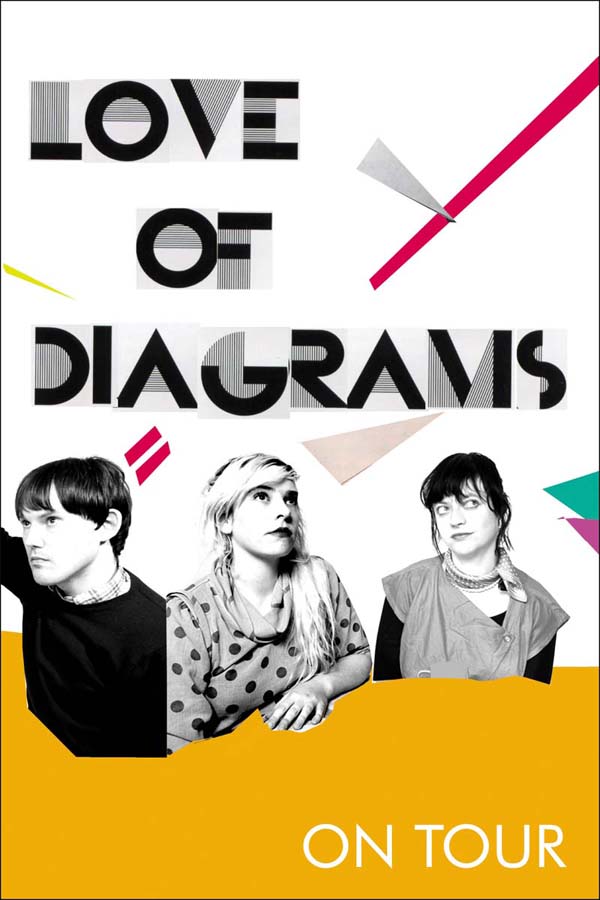 There have been a few updates to Love Of Diagrams' upcoming US tour in support Enon, with the full schedule as follows :

Love Of Diagrams - Autumn US Dates With Enon If you're amongst those who either failed to catch Love Of Diagrams during their Spring tour with Ted Leo or you've avoided the considerable charms of their staggeringly great Mosaic CD/LP, you'll have a proper opportunity to become reacquainted with the Melbourne trio when they return to American for the following shows supporting Enon :

More Eastern dates will be announced soon. In the meantime, here's some biographical info in video form from December of last year.

If you live in the Windy City (or thereabouts), you're in luck! Not only are Love of Diagrams opening for Ted Leo and the Pharmacists at the Metro, but they are also playing another gig that night at the Hideout! Here's the details on the latter:

The Hideout is one of the best venues in Chicago, if not the best, if you ask me! So head on out and have fun!

Saturday's Gonna Be a Good Day

Two free in-stores, two cities, same time.  Love Of Diagrams will be performing a free, all ages show at Amoeba Music in San Francisco this Saturday at 4pm.  Meanwhile, Jonathan Meiburg and Thor Harris of Shearwater will performing at End Of An Ear in Austin. 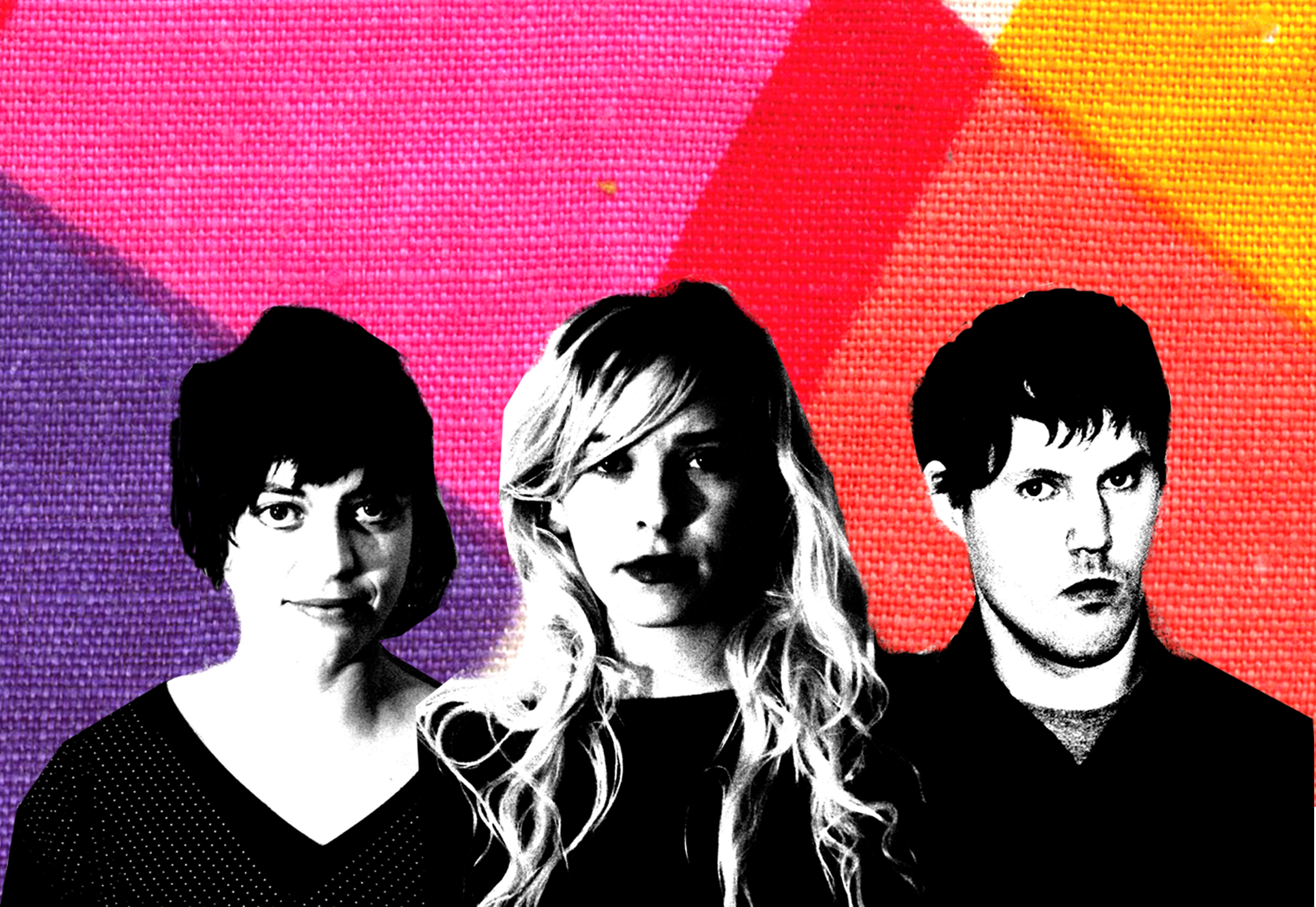 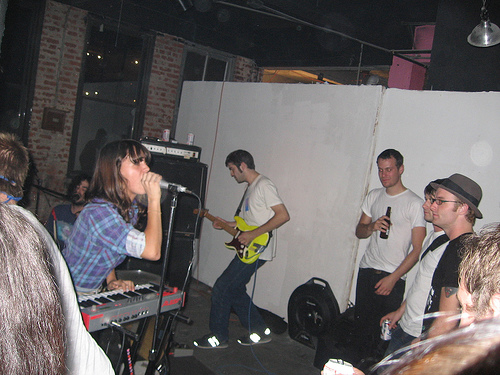 (above : Love Of Diagrams. below : Times New Viking, the latter pic stolen from Partydope)

To commemorate both Love Of Diagrams and Times New Viking visiting the Texas capitol and playing big ticket / big room gigs this Saturday night (with Ted Leo & The Pharmacists and Yo La Tengo respectively), label management has stepped in (cough) and bullied both bands into playing the follow free concerto.

There will be beer. Don't thank us now, thank us on Saturday.

Lovin' Love of Diagrams in the City of Brotherly Love

Love of Diagrams (above) opened the first date of their opening stint with Ted Leo and the Pharmacists last night in Philadelphia at TLA, and this correspondent reports that it was an amazing show. Totally packed house, great opening set by Love or Perish (which I just realized is also the title of a poem by W.H. Auden, thanks google!), cold Yuenglings and good times and great music all around as Matador's favorite Aussies got some Illadelphians dancing up front. If you're, y'know, a sentient being residing in the lower 48, please do yourself a favor and go see them on this tour. Dates are here: Matador tour page. Tonight's show in D.C. sold out weeks ago, though, but they're playing pretty much everywhere else, so go!

Love Of Diagrams seem to have brought the spring with them, despite the fact that they arrived in London after a bitterly cold few days in New York.  The sun was shining for their recent press trip and couple of London shows.  The sun is still shining but who knows for how long.  Love of Diagrams are still here but we do know for how long.  They play again in Huddersfield at Club NME on March 20, On Paris on March 23 at La Fleche D’Or, and Nottingham’s Stealth Club on the 24th.  Then they head back to the States for 30 dates with Ted Leo and the Pharmacists.

The intrepid antipodeans arrived in London having had very little sleep during their pre-album US jaunt so went eagerly to bed in the (not-so) lavish Beggars flat, which is decked out with signed Rolling Stones posters, Bauhaus picture disks, a dubious horror DVD collection and bunk beds.  In the middle of the night a mighty thump was heard.  Watching too many scary movies again kids?  Well, erm, no.  It was the sound of vocalist/bassist Antonia falling from the top bunk and landing on her arm during an episode of attempted sleepwalking.

Despite having a sore wrist, Antonia still managed to be able to move her fingers deftly enough to deliver a blinding set at new trendy London club Chalk at The Scala on Saturday March 10th.  The audience was duly impressed by the trio’s tight set and brayed for more once it was over.  It was also my first time seeing the band and the thing that struck me was how ‘punk’ they sounded.  The great songs on the records sound even more intense and blistering live, and so catchy!  I’ve spent the last week with ‘Double’ and ‘Pace Or the Patience’ lodged in my brain… hummm hummm hum hum…

Slightly shaken and disturbed after seeing the new David Lynch flick “Inland Empire”, Love Of Diagrams hit the stage at The Hoxton Bar And Grill on Monday with another rip-roaring set.  A room filled with loyal fans and a few Australians were delighted to have LOD all to themselves, although a few technical hitches cut the set short and my friend nearly yelled himself hoarse trying to get them to return to play “No Way Out.”  Ah well.  There’s always tomorrow.

Tomorrow came and went but not before Love Of Diagrams played the third gig of the week to complete the triangle of shows (if we’re speaking diagrammatically) at Artrocker at the Buffalo Bar.  A packed room provided the most appreciative audience so far.  I stood by the speaker so it sounded very LOUD, in a GOOD way.  They played another brilliant set, the crowd went wild and again left us wanting more.  Can’t wait to see them again.  Hopefully they’ll be back A LOT.

Everyone around me hates my horrible, impulsive renditions of "Pace or the Patience"

When I use the term "post-punk", you know what I mean, and I therefore apologize for being too lazy to come up with a more accurate tag, but maybe one simply does not exist....for all the right reasons. The easy-on-the-peepers Love of Diagrams have opened their EP with a song that's like having sex on a camping trip: Fucking In Tents!! That one only works verbally....at an odd hour. Drunk. They pulled the old Bob Welch "Ebony Eyes" trick on this one: Seven or eight big hooks in one song that could have easily been utilized to make seven or eight good songs. Why did I mention the usage of the neutered genre classification of post-punk? Because I have listened to this song the exact number of times that I've listened to my other favorite first-wave example, Nightingales' "Idiot Strength." And by "exact number", I mean 782 times within the past two weeks. And though residing on what feels like the other side of the Earth from Athens, GA, I must, as a Southerner, give it up for the Pylon cover.