If It Ain't Broke, Might You Still Fix It? #BOTH 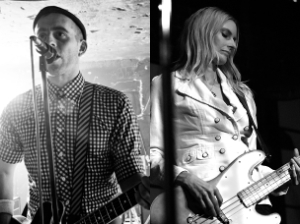 As the title of this post suggests, it's easy for people to mess up even the simplest of things.  But might there be more wisdom in said title then apparent at first glance?  Some things seem perfect, say chocolate and peanut butter, and then miraculously one day you discover these two things you really, really like make a perfect combination as well.  Well after months of touring together, it appears that Ted Leo and Aimee Mann, and moreover their fans starting tonight in LA, may discover a favorite new musical collaboration.   Under the name #BOTH, Ted + Aimee take to the stage tonight in Los Angeles and later this month in San Francisco to perform some new songs they've recently written.  And to unfix what wasn't broken, Ted Leo will also be supporting Aimee Mann on an upcoming run of Spring tour dates.   All the touring details, in every conceivable combination are below, should you be looking to catch Ted this Spring.

If Popular Broadway Shows Can Have Touring Companies, Why Not Yo La Tengo? OK, I'll admit the above headline is not actually what's going on here.  But it sounds way less crass than "franchising". (we're not entirely sure who this is, but he's never played drums in any lineup of White Zombie)

Sorry I've been out of Matablog commission for a while.  Earlier this week, me and members of the new, super-secret Matador Records Street Team (they're kind of like SEAL Team 6, except they can't bench press as much) visited  record stores to misfile copies of Animal Collective's 'Centipede Hz' in the hopes of improving 'Sun''s first week chart placement (guess where I got the idea?) Before you flip out over the ethics of this scheme, I should confess it didn't turn out exactly as planned.  The entire team (save for me, thankfully) was maced by the first shop owner we hit, and after a visit to the local emergency room was followed by a conference call with our solicitors...well, guess who forgot to have the Street Team sign waivers indemnifying the label in the result of physical injury?

I won't bore you with the details except to say some of these street teamers come from families who are very litigious.  I think we can all agree that what's wrong with this country is job creators like my partners and I being stifled by people who are afraid of a little competition.  But don't cry for Matador Records, folks. No matter how high or low we might get over the day to day machinations of the music business, rest assured that no one in our organization has ever faked the identity of a former White Zombie drummer in order to avoid a $75K bill.

Last week, Patrick graciously forwarded an email from someone touting a "debut" EP from "The Fall".  Needless to say, the recordings in question were not new works from Mark E. Smith and whatever plucky young ensemble he's assembled, but rather, someone who thought THE FALL WAS A PRETTY GOOD NAME FOR A NEW PROJECT.

And who can argue with that logic? I mean, it worked pretty well the first time. Last time I checked, there were multiple version of Batman and Spiderman doing rather well commercially. And this is hardly without precedent.  In the past we've been solicited by persons representing bands called Helium and The Frogs, thoroughly oblivious to the fact we'd already released records by bands with those very same names.

I'm really not offended by the request.  But I do think it would be more professional / polite for the Third Eyed Blind guy to at least sign his name.

I've had some stupid ideas for this company, sure, but don't you think this is taking it too far?? A Fucked Up Halloween

Fucked Up dropped by Matador UK today, to catch up on some paperwork.

We also managed to get some new press shots done, exclusively for the Matablog.

"THE BEATING HEART OF THE UNDERGROUND." For Starters, It Looks Like He's Had Some Work Done 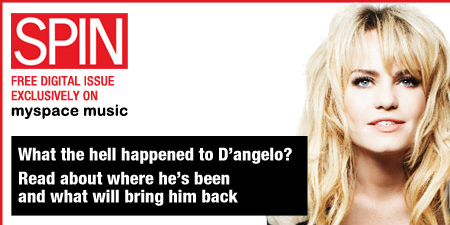 You've got to admit, that's one heck of a transformation.

The AP is reporting a first class passenger on a JFK-Guyana flight was so intoxicated / pumped up with self-entitlement, he slid down the jet's emergency chute upon landing rather than wait for all the economy passengers to disembark. 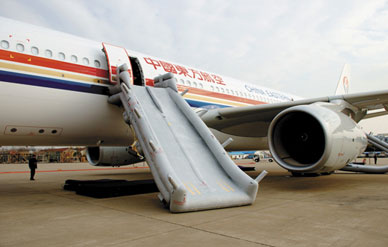 I would like to state for the record that I have never been to Guyana.  Also, this item gives me a cheap excuse to include the Matablog's 3rd ever reference to the thespian dynamo known as Powers Booth (ref. #1, #2).

Legendary Matador Recording Artists Return To The Stage This Friday

The Condo Fucks are supporting the A-Bones this Friday night at Brooklyn's Magnetic Field.  Doors open at 8pm, there's an $8 cover and DJ Phast Phreddie will be spinning.  Records, presumably.

As you might've read via Pitchfork or Idolator,  Michael Kaminski of Akron, OH was arrested last weekend for trying to hold up a video store with a cologne bottle shaped like a gun. Why might PF  give a hoot about the Akron police blotter?  Well, as it turns out, Kaminski is a former member of NYC avant combo Cop Shoot Cop.

Or so I'm told. When I saw the PF headline, "Ex-Cop Shoot Cop Dude Attempts Boneheaded Robbery", I thought, "no, not sweet globe-trotting Tod A.  Please don't let it be the dashing David Quimet.  If Jack Natz or Phil Puleo are facing jail time, where can I send the cake with the file inside?"

But it wasn't any of those guys. It was Michael Kaminski, who by virtue of being a replacement guitarist during the group's 7th and final year of existance (please note that Kaminski is featured on none of CSC's commercially available recordings)  has given rock bloggers around the globe a chance to sneeringly drop a band name they might not otherwise bother with.

While I'm sure some of you would just as soon file this story under "who gives a fuck?", the PF thing bugs me. If Willie Alexander got pinched for failing to pay his parking tickets, I doubt the Boston papers would run a headline claiming "VELVET UNDERGROUND ROCKER JAILED".

Granted, there's something irresistable about a dude from a band called Cop Shoot Cop being nabbed with a faux firearm. Except the guy in question was barely a member and the fellows responsible for CSC's surviving works, have not, to my knowledge, been charged with any felonies in the past 7 days.

Hundreds of Paris Hilton albums have been tampered with in the latest stunt by "guerrilla artist" Banksy.

Banksy has replaced Hilton's CD with his own remixes and given them titles such as "Why am I Famous?", "What Have I Done?" and "What Am I For?"

He has also changed pictures of her on the CD sleeve to show the US socialite topless and with a dog's head.

A spokeswoman for Banksy said he had doctored 500 copies of her debut album Paris in 48 record shops across the UK.

She told the BBC News website: "He switched the CDs in store, so he took the old ones out and put his version in."

But he left the original barcode so people could buy the CD without realising it had been interfered with.

Banksy is certainly capable of the improbable - finding a creative use for the Anti-Nowhere League, for instance (Quicktime required)

Reggaeton superstars rarely make it to Hardeeville, S.C. So last month, local music fan Richard Martinez gladly forked over $100 at the door for a Daddy Yankee concert that had been advertised on local radio. But after a three-hour wait, Daddy Yankee was nowhere in sight. Martinez and other witnesses say a woman selling tickets then got into what she claimed was the rapper's limousine and screeched out of the parking lot with the money. When the hundreds of fans in attendance caught on to the scam, all hell broke loose. "They were about to burn the club down. They started throwing bricks, glass, everything at the club," Martinez says. That melee followed one of the latest alleged scams reported to law enforcement by management for Daddy Yankee, who is not currently on tour. Bergen County, N.J.-based prosecutor John Molinelli has issued an arrest warrant for a suspect -- believed to be in the Dominican Republic -- who received a wire transfer of $100,000 to produce Daddy Yankee for a recent concert in New Jersey. "They're definitely allegations against the same person," Molinelli says, referring to a possible connection among incidents in South Carolina, New Jersey and three other locations.

A statement on Daddy Yankee's Web site provides an E-mail address for fans to report suspected fraud. "Every day there are new scams," Yankee publicist Mayna Nevarez says. In October, says Nevarez, investors for a Daddy Yankee date in New York were ripped off for $75,000; more recently, a San Antonio investor called before sending money to Daddy Yankee's management for a non-existent concert.

Eh. Same thing happens in lower Manhattan at least once a year with someone claiming to be Chain Gang.