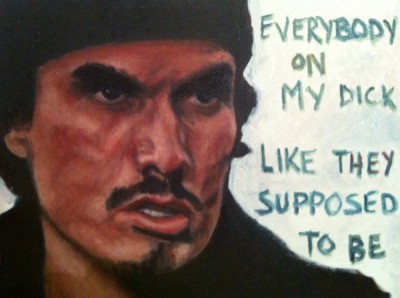 Just in from the department of unexpectedness.... Banks (no, not Lloyd) has upped a mixtape and it's called EVERYBODY ON MY DICK LIKE THEY SUPPOSED TO BE.

Actually, we kinda knew this was happening.  Paul sent over a rough mixtape about 9 months ago of his beats and production and it was genius. And what, with all the Kendricks and the A$APs and whatever, we thought a mixtape would take Banks to new heights if we got it out months before release.

But the long-standing issues with Matador and the rap game quickly blew up our pre-release hype strategy.  Long story short, we have earned a certain "cash-only" rep in the hip hop world requiring us to either send briefcases handcuffed to interns to studios deep in Flatbush or.... call in favors which takes time.

In this case, Paul called in a some mega-favors and got features from El-P, Talib, Mike G, and... hold up, HIGH PRIZM (né High Priest).

(Programming note, I've spent the entire morning doing things to all sorts of websites that we aren't ever allowed to do.  I AM DARKTOOB. And I feel like Dean Bein.)

Listen to the whole thing over on Soundcloud:

The El-P cut entitled "Quite Enough" has been excerpted for those needing "an entry point".

With the possible exception of Tony La Russa (Jane Wieldin?) there's no one I'd rather take cat care advice from than Jethro Tull's Ian Anderson (link taken from Panopticist)

The Boston Globe's Suzanne Ryan had the distinct pleasure of attendending a TV critics' summer conference in Los Angeles recently, a occasion presumably designed so the various networks could showcase their offerings for the upcoming fall season. W.C. Fields' admonishment, "never work with children and animals," apparently never reached Anne Heche, but were Fields alive today, "never work with Anne Heche" could well be useful advice for the American Broadcasting Company.

ABC is launching a new drama starring Anne Heche, a New York relationship coach who finds herself stranded in Alaska. In the pilot episode, she is freaked out when she discovers a raccoon in her hotel's closet.

During a press conference, reporters wanted to know all about the raccoon, whose name is Elvis.

Is that a real raccoon or an animatronic? (Real)

Did you fly him into Vancouver to shoot? (No, a local hire)

Is he a recurring character? (Yes)

In the pilot, Elvis had a STUNT DOUBLE that ran down the stairs for him? (Yes, a DOG NAMED BOOMER DONNED A RACCOON SUIT for a staircase scene since raccoons don't run, they lope).

Since raccoons are noctural, did you wake Elvis up to shoot? (Yes and Anne pet him to make him feel better)

Later, a Touchstone Television publicist told me with all seriousness that he and his co-workers had tried to anticipate every question we reporters might have tossed out but no one even thought about Elvis.

"We should have brought him here," he said sadly.

More weirdness from the Animal Kingdom, this time courtesy of the Associated Press and Comet News:

LONDON (AP) -- A guard dog has ripped apart a collection of rare teddy bears, including one once owned by Elvis Presley, during a rampage at a children's museum.

''He just went berserk,'' said Daniel Medley, general manager of the Wookey Hole Caves near Wells, England, where hundreds of bears were chewed up Tuesday night by the 6-year-old Doberman pinscher named Barney.

Barney ripped the head off a brown stuffed bear once owned by the young Presley during the attack, leaving fluffy stuffing and bits of bears' limbs and heads on the museum floor. The bear, named Mabel, was made in 1909 by the German manufacturer Steiff.

The bear with Elvis connections was owned by English aristocrat Benjamin Slade, who bought it at an Elvis memorabilia auction in Memphis, Tenn., and had loaned it to the museum.

''I've spoken to the bear's owner and he is not very pleased at all,'' Medley said. [clearly Elvis is alive!]
A security guard at the museum, Greg West, said he spent several minutes chasing Barney before wrestling the dog to the ground.

If the King of Rock (ahem) shot out a television just because Robert Goulet appeared on it, I cringe to think what he'd do to poor Barney.

Hell's Getting Hotter: Manatee Sighted on the Hudson

(the members of Overkill, visibly excited that Joel remembers them)

Our good friends at the Poughkeepsie Journal hipped us to the following far out news from the world of nature:

A manatee has been seen in the Hudson River near Manhattan.

The gentle behemeth [sic., clearly Vassar needs to step up its literature program!], estimated at 10 feet long and close to 1,000 pounds, is far from home. Most manatees live in Florida and sightings even in Virginia are considered rare.

Watchers tracked this one last month as it swam north — first near Delaware, then Maryland, then New Jersey. Saturday, it was seen at 23rd Street in Manhattan, then later at 125th Street in Harlem.

A manatee was seen near Montauk, on the eastern tip of Long Island, in 1998, but this may be a first for the Hudson.

"As far as I know, the first for the river. We did have one migrate up along Long Island last summer but it never moved inshore," said Tom Lake, the editor of the Hudson River Almanac. "Pretty exciting stuff."

Durham called it a "bona fide" manatee sighting, but there isn't photographic proof. Descriptions by a kayaker and others in the Hudson match grainy video showing a barnacled manatee passing Barnegat, N.J., she said.

Needless to say, even after this the Bush administration will continue to deny the effects of global warming.