The Ponys - New US Dates 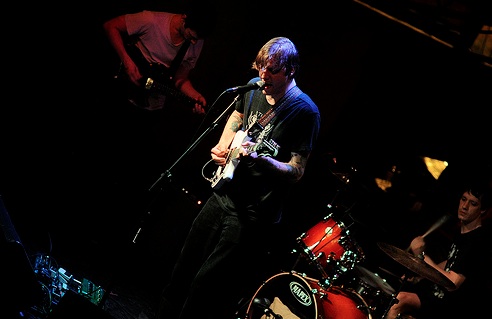 If you're amongst those who missed the very-much-BACK-IN-ACTION PONYS on their recent run of dates with Disappears and Woven Bones, there's a few more opportunities hear material old and new, just confirmed below.

"Deathbed + 4" 12" and digital EP available from The Matador Store

Maybe you just thought The Ponys were returning to the club circuit to rehash old glories and use some old drink tickets. If so, you were WRONG WRONG WRONG. Coming on April 20 (digital) and May 25 (12" vinyl) is the first new Ponys' release since 2007's 'Turn The Lights Out', the menacingly awesome 'Deathbed + 4' EP. Here's a sneak preview in the form of "Check The Door" . 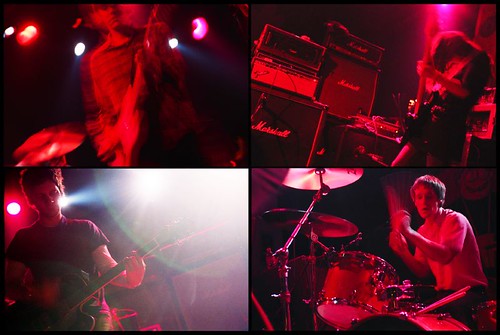 New Yorkers, your chance to to catch The Ponys comes in June. In addition to the previously announced dates, the band will perform at the Mercury Lounge on Friday June 18  and Union Pool on Saturday June 19 with Disappears and Woven Bones. All dates below:

After a handful of don't-call-it-a-comeback shows around the midwest last Autumn, The Ponys will be hitting the road for the first time in well, far too long, starting next week. We'll have some news about a forthcoming commercial-available-recorded-product of some sort or another very soon (unless you read about it elsewhere. We're not the only credible source in the world!)

The Return Of The Ponys

Hey, look who's back! New shows, new songs, etc.   If you're going to the Chicago show, I've already got dibs on the Rod Blagovecvich wig.

The Ponys - Live On 'All Songs Considered' 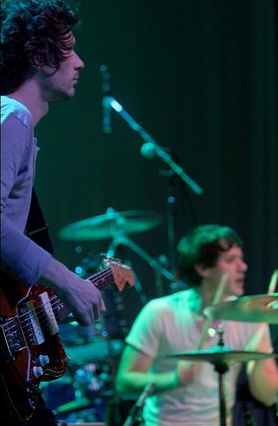 Cunning Stunt Dept. : The Ponys, Invading Their Own Privacy For Your Entertainment

With the Ponys starting a nationwide tour in support of Spoon, we've spared no expense equipping front dude Jered Gummere with a live camera that will be webcasting his comings and goings....24/7? Whenever he's clothed?

The Ponys - In Party-Motion-Tonight, On Tour With Spoon Shortly Afterwards 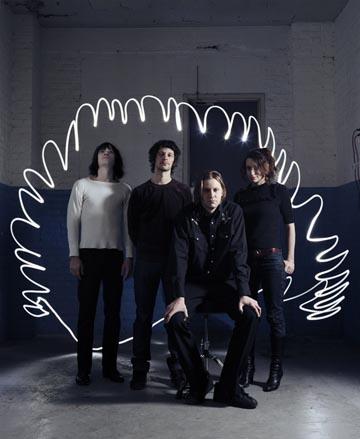 Though staff and management of Matador Records and Filmworks all agree that stealing music is wrong, we have no moral quandry about lifting the following information from The Ponys' myspace bulletin. Much like Harry Truman's decision to drop the atomic bomb on Fitchburg, MA, it had to be done.

Pony on the loose!!

The Ponys have been rocking it worldwide since the release of their excellent "Turn Out The Lights" last March and they are taking some well deserved time off before they hit the road again this fall with Spoon, well at least some of them are.  Jered is hitting the West coast as a member of White Savage.  Don't miss it.

From The Ponys myspace bulletin:

Hey my other band White Savage will be on the west coast next week. Come visit me. Jered

Check out White Savage this past Spring at SXSW

Matador Vs. The Ponys bowl-off round 1 As killer as last Saturday night's Bowery Ballroom Ponys / Jay Reatard show was, it is pretty hard to compete with a bowling alley where the bands play right in the middle of the lanes. With that in mind I had no problem getting in the van for the trip to senic Asbury Park New Jersey.  I picked up Paul Sommerstein, ESQ and we raced, Corzine style, down the Garden State Parkway to the up and coming neighborhood of Asbury Park.  Once there we didn't waste too much time getting down to business on the lanes. The first game was just me and Jered and we both we're having trouble getting into the zone.  Jered has a great style: launching the ball into the air at first with lots of spin on it producing a killer hook, but he just couldn't get it down and many a ball ended up in the gutter in the first game.  If he had it down I'd of been done for, but my basic style prevailed.  The second game brought Paul and Meslissa into the action and upped the stakes when Paul produced two awesome (and huge) home made buttons.  Aerosmith and Cheap Trick, winner gets to choose their pin. Jered clearly had me beat until the 10th frame when I channelled my love of Aerosmith into two consecutive strikes. Woo-hoo!

In our defense the Asbury Lanes, although totally cool, isn't really conducive to competitive bowling, but it sure was a good time.  And speaking of a good time, althogh these remaining Ponys / Jay Reatard shows are not happening in bowling alleys you should by all means try to attend.

All of the October dates are supporting Spoon.

The Ponys - US Dates With Jay Reatard

The Ponys' Assault On Your Consciousness Continues 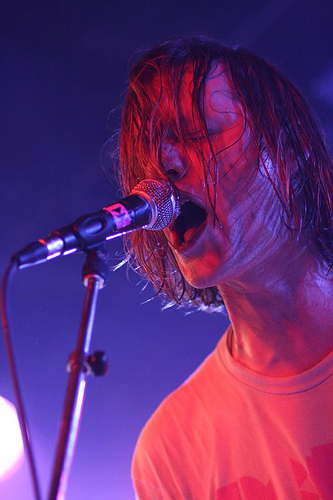 Asked if we support college and non-commercial radio here at Matador, we would have to reply "yes". And, of course, if that means plying college MDs with free goods, tickets and expensive gifts to pump up chart positions, we'd emphatically reply "hell yes!!"

Well, The Ponys are about to put a little more rock action in their support. The Free Yr Radio campaign is putting together a series of in-stores to help in the support of the local college radio stations across the US and next Tuesday April 24th the band are going to be rocking Urban Outfitters (where else?) in Lawrence, KS in support of the very fine radio station KJHK.

The show begins at 6pm and your free invite can be printed at www.freeyrradio.com/kjhkguest.

Make sure you show up early and have your invite in-hand as the show is first come, first served and you MUST have an invite.

To help us celebrate this week’s release of The Ponys’ 'Turn The Lights Out', our friends at Daytrotter posted a very nice feature on the band which, of course, also includes four live tracks recorded for the soon to be infamous Daytrotter Sessions.

(an ambitiously blonde Jered, as illustrated by Daytrotter's Johnnie Cluney)

Recorded a few weeks back in beautiful Rock Island, IL, the band tore up some two-inch tape with four absolute keepers (and you can keep them, since they are available as mp3 downloads).  And the real sweetness comes with a scorching version of ‘Poser Psychotic’.

The band just left Austin where they logged the most shows for any single Matador artists at SXSW this year and are currently back out on the road with the Black Lips. If you missed that shindig in Texas and you’re are missing the band on this go-around you might want to check yourself out some live tuneage here. 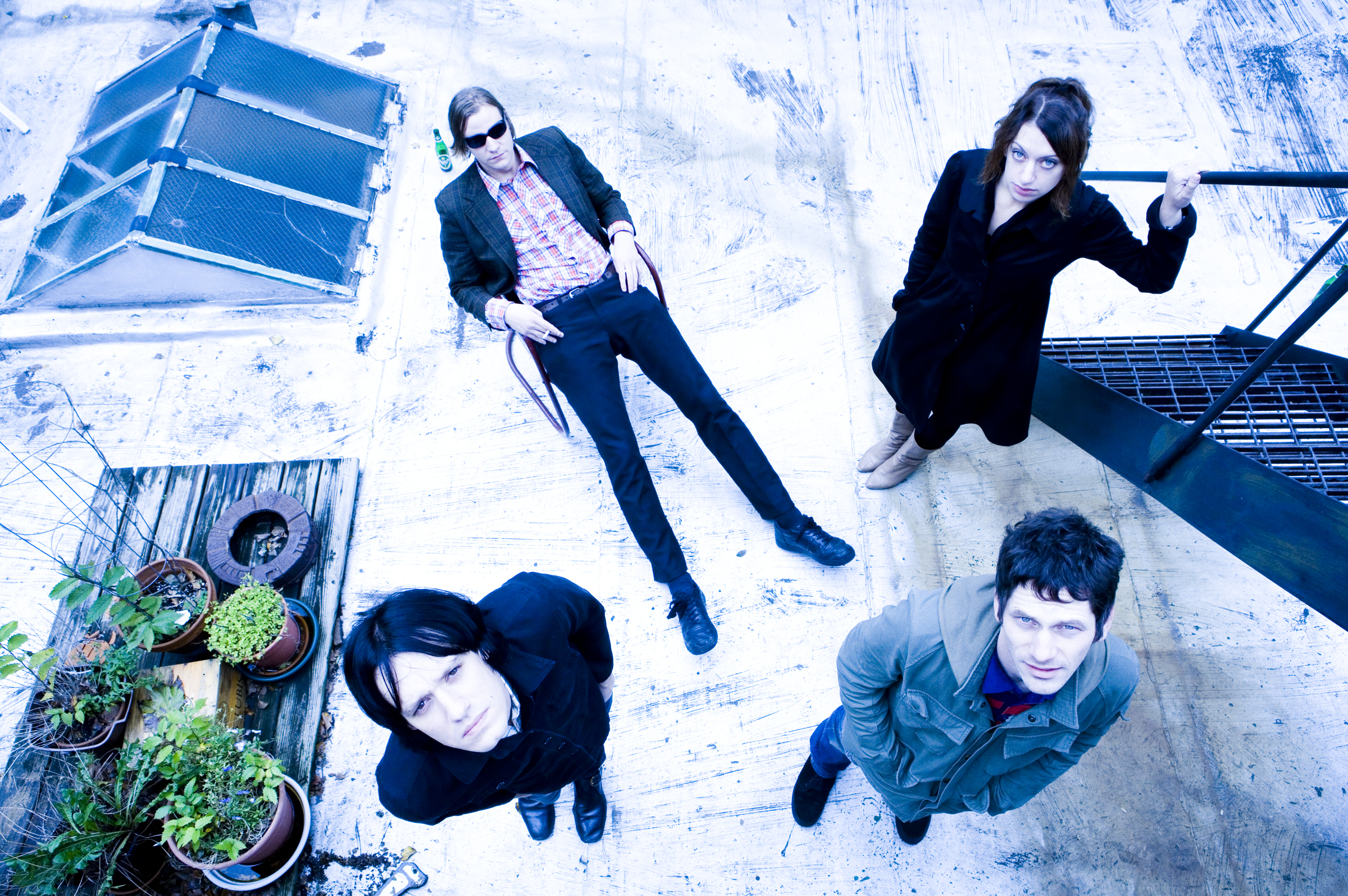 We're just 8 days away from the retail event of the spring...my mom's birthday! (hey mom!).  Coincidently, March 20 also marks the release of the 3rd album from THE PONYS, 'Turn The Lights Out'.   And with the band playing far too many SXSW shows this week, what better song from the album to preview than "Poser Psychotic"? (mp3)

There Ain't No Future In Our Frontin' : Matador At SXSW 2007

It's the rock biz' version of Spring Break, except Spring Break doesn't have enough cachet to lure Donnie Davies. And while Matador isn't doing a zillion dollar "showcase" (damn, we hate that word) this year, we are lucky enough to  witness several of our brightest lights making multiple appearances in Austin next week...on their own dime!

OFFICIAL SXSW EVENTS (ie. those without badges, wristbands and/or having turned up way early might well be SOL)

in addition, the following parties / instores are happening and should be wide open to the public, space permitting :

Thursday, March 15 - Stuart Braithwaite, appearing as part of the Roky Erickson Ice Cream Social at Threadgill's (time TBA, but it's in the afternoon)

for more info on the day parties, non-SXSW events, we suggest you check out http://www.showlistaustin.com The Ponys will be performing a free show at Waterloo Records during South By Southwest.  Check out the action Thursday, March 15th at 4PM.  Waterloo Records is at 600A North Lamar Blvd. in Austin.

Sonic Cathedral is a cool place to play and it feels right for the Ponys further onslaught across this city. The ceiling is crowded with yellow balloons with silver strings dangling onto the audiences heads. Nat who runs the club is DJing and shows some fine rocking selections. So do the Ponys. This band kick proverbial ass. They delve into "rocks rich tapestry" ( (c)Julie Burchill circa 1979) but come up weaving their own distinct and visceral sound. There is the sweeping grandeur of "1209 Seminary" and the stately beauty of  "Shine" balanced by the punchy future rock classic "Double Vision". The gig ended ends in a rock and roll maelstrom and yes indeed they "rock like a hurricane" ( (c) Sharon O'Connell circa 2007).  As they leave the stage Nat cues Television, a fitting salute to The Ponys' power and pedigree.

The Ponys @ The Barfly, Camden

What nobody told me is how loud they are live. Seriously, they are fucking loud. And I spend most of my time at noise shows.

The Ponys took the stage a little late but promised to 'keep making noise til they pull the plug on us', which was still nowhere near long enough for me. Concentrating mostly on material from 'Turn The Lights Out', songs collided into each other, a blur of feedback, furious riffing, and psychedelic bizness that I don't know the correct term for. And then in the middle of all that, they drop in a jaunty keyboard tune, and before you've even finished scratching your head, they're back to the hard stuff, pummeling you with all sorts of garage-rock goodness. I was beaming from burst eardrum to burst eardrum.