News from True Panther Sounds for you this morning...

“PULL UP” on a typical night out in NYC with ABRA and her BFF…  Drinking 40s, going to Chinatown, stacks of cash, motocross and ATV racing, “Scream” masks, late-night tattoo appointments.  Filmed on-location in summer 2016 with support from The FADER, ABRA says of the video, "Shout out to A$AP Tyy for bringing his boys out, and showing us a good time."

Kraftwerk live in Soest, winter 1970. The earliest surviving concert footage. My favorite part starts at 16:42. You will have others.

Actually it's a bit unfair to reduce Polish musician Gabriele Kulka to just a genre label, so call this whatever you like. A truly memorable & new take on "Keep Your Eyes Peeled" by Queens of the Stone Age from this talented group of Polish musicians.

Savage: A New Song (and Music Video) from Majical Cloudz

Fans will already be familiar with "Savage," a staple of Majical Cloudz sets over the past year. They have now recorded it in the studio and made a quick music video. Watch it at the link above.

Lots of interesting Majical Cloudz stuff happening in 2014 so keep your eyes peeled.

Keep your eyes peeled (as they say) for the Vampyre video coming soon.

Click above to watch the first proper video for Perfume Genius, for the song "Lookout, Lookout" (via Pitchfork). Directed by Patrick Sher and shot in Portland.

Perfume Genius has also just announced one more NYC show before the end of the year, supporting Light Asylum at a secret space in Bushwick next Wednesday, December 15. The $28 tickets include free hors d'oeuvres and three free drinks. Go to envelopefamily to buy tickets; location information will be included with purchase confirmation.

For those of you who missed it, yesterday we re-released the Learning album in a special slipcase edition with new artwork and three new tracks. You can buy it from us:

or from your favorite local record store or online retailer. Check out an MP3 of Dreeem, one of the new tracks, HERE

Magic Kids "Candy" for Yours Truly

Magic Kids were in the Bay Area for the first time. They played Valentines Day with Girls and Smith Westerns the night before and it was a beautiful show. The next day they cobbled together this orchestra, which features Christopher + Garrett from Girls, Max from Smith Westerns, some friends of someone's aunt who had a weekend flute club, a real string section and some more random friends to play this early version of Candy for the Yours Truly guys. It was kind of a rainy day but it felt so warm in that room. Hope you enjoy. Video is hosted HERE on your's truly's site which also has a nice letter from the band.

The band is leaving for Europe this week and coming back for a tour of the states. Tour dates HERE

A few months ago, when talking about the meaning behind the song "Real Love" and possible ideas for a video Ekhi said something like "Real love is being in a state of conflict against the outside world". Focus Creeps took this concept and ran with it, making a beautiful, dreamy and ultimately pretty psychedelic and creepy video for "Real Love". Enjoy!

This week Magic Kids released their record, played a symphony accompanied show for 500 of their hometown friends and fans, and left for a week-long instore tour. But the news doesn't stop here. Happy to share this new video for "Superball" directed by Jack Ferry. Evokes some simple classic vids, faces, instruments, soft-focus lights...eternally into it.

Salseros freak out to Delorean

Loopy salseros and salseras get down to "Simple Graces" by Delorean.

The New Pornographers return with the second video from Together (buy the album here). This one kicks ass too, but with added whimsy. The video was directed by Sammy Rawal, and Pitchfork has the launch:

Also, on the heels of an appearance at last weekend's Sasquatch Festival, the band will hit the road in short order:

Ravers freak out to Delorean

Loopy rave dudes get down to "Endless Sunset" by Delorean.

By the way, they'll be back in the US starting next week:

The New Pornographers performed "Crash Years" on Late Night With Jimmy Fallon yesterday. Neko Case takes the lead vocal and yes, that's Todd Barry playing the sleigh bell. Dan Bejar was also in the house, and it's a straight-up loose, joyous performance of a kind rarely seen on broadcast TV. And some serious rock cello moves.

Matador Records is not responsible for any drumstick injuries that may or may not have occurred.

TOGETHER is in stores this week - pick it up at:

or visit one of your favorite local record stores today.

June 23 sees the release of the God Help the Girl, a story set to music by Stuart Murdoch of Belle and Sebastian.

In the latest video from the album, available for purchase here, Stuart seeks out and auditions a group of young singers who ultimately provide the vocal backbone for God Help the Girl.

A.C. Newman recorded several tracks from his upcoming album Get Guilty at a studio in Brooklyn's DUMBO neighborhood last Monday, and we filmed it. Click the video above to see the first one, "Like A Hitman, Like A Dancer" via Pitchfork.tv.

Preorder Get Guilty, in stores January 20.

Here's the brand new Fucked Up video, the first in the band's history. Edited by Bajir Cannon/Shot by Brendan FitzGerald of VBS.tv

Jay Reatard on the Interface 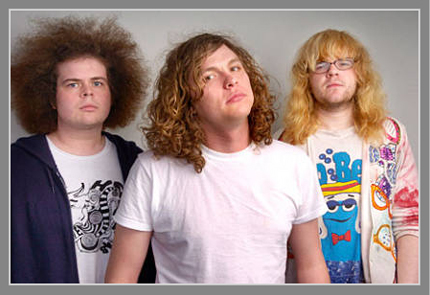 Matador Singles '08 is in stores tomorrow.

Fucked Up on the F Yeah tour Videothing taped a bunch of footage of Fucked Up on the F Yeah tour up the West Coast a couple weeks ago. Also featuring Crystal Antlers and the Strange Boys.

Go here (or click on the image above) and then select "fucked up in washington":

Fucked Up on F Yeah on Videothing

For more details on what was obviously a substance-soaked trip (at least for some members), see this tour diary post on Looking For Gold.