Julien Baker will release her third studio album, 'Little Oblivions', on February 26. Today she reveals the first look at the album via “Faith Healer.” She says, “Put most simply, I think that ‘Faith Healer’ is a song about vices, both the obvious and the more insidious ways that they show up in the human experience. I started writing this song 2 years ago and it began as a very literal examination of addiction. For awhile, I only had the first verse, which is just a really candid confrontation of the cognitive dissonance a person who struggles with substance abuse can feel-- the overwhelming evidence that this substance is harming you, and the counterintuitive but very real craving for the relief it provides. When I revisited the song I started thinking about the parallels between the escapism of substance abuse and the other various means of escapism that had occupied a similar, if less easily identifiable, space in my psyche."

“There are so many channels and behaviors that we use to placate discomfort unhealthily which exist outside the formal definition of addiction. I (and so many other people) are willing to believe whomever-- a political pundit, a preacher, a drug dealer, an energy healer-- when they promise healing, and how that willingness, however genuine, might actually impede healing.”

“Faith Healer” introduces the exhilarating, widescreen musical palette and infectious spirit of risk-taking found on Little Oblivions, a transformative sonic shift from Baker’s more spare and intimate previous work. Engineered by Calvin Lauber and mixed by Craig Silvey (The National, Florence & the Machine, Arcade Fire), both of whom worked with Baker on 2017’s 'Turn Out the Lights', the album was recorded in Baker’s hometown of Memphis between December 2019 and January 2020. Baker’s tactile guitar and piano playing are enriched with newfound textures encompassing bass, drums, synthesizers, banjo and mandolin, with nearly all of the instruments performed by Baker. The album weaves unflinching autobiography with assimilated experience and often hard-won observations from the past few years, taking Baker’s capacity for starkly galvanizing storytelling to breathtaking new heights.

If you are lucky enough to have a future where the present anxieties of distance become romantic memories, I hope there are people who turn this album over in their hands years from now and remember the world it tumbled into. A world that, in whatever future moment exists, will likely be defined by the work people undertook and the fights people continued to show up for. But it will also be a world defined by how many of us exist on the other side of distance.

In the moment, here is a new Julien Baker album that arrives as a world comes to newly understand its relationship with touch, with distance. At the time of this writing, I shouldn’t want to run into the arms of anyone I love and miss, and yet I do. In an era of hands pressed on the glass of windows, or screen doors. An era of hands reaching back. An era where touch became an illusion. If we have been unlucky enough, our own lifetimes have prepared us for the ever-growing tapestry of aches.

To wrestle with the interior of one’s self has become a side effect of the times, and will remain a side-effect of whatever times emerge from these. The first time I ever heard Julien Baker, I wanted to know how an artist could survive such relentless and rigorous self-examination. I have been lonely, I have been alone, and I have been isolated. There are musicians who know the nuances between the three. What whispers in through the cracks of a person’s time alone. Julien Baker is one of those artists. A writer who examines their own mess, not in a search for answers, but sometimes just for a way out. A lighthouse to some newer, bigger mess.

It is hard to put into words what this feels like. Little Oblivions is an album that steps into that feeling and expands it. Sonically, from the opening swells of sound on “Hardline” rattling the chest, loving but persistent jabs to the way “Relative Fiction” spills into “Crying Wolf,” which feels like speeding down a warm highway that quickly turns into a sparse landscape, drowning in a hard rain. Lyrically, too, of course. There are writers who might attempt to bang at the doors of their listeners, shouting their particular anguish of the hour. And there are undoubtedly times when I have needed that to get from one sunrise to the next. But there are also writers who show up assuming anyone listening already knows what it is to crawl themselves back from one heartbreak, or to shout into an enduring darkness and hear only an echo. Little Oblivions is an album that details the crawling, details the shouting. An album that doesn’t offer repair, or forgiveness. Sometimes, though, a chance to revel in the life that is never guaranteed. Yes, the life that grows and grows and is never promised. How lucky to still be living, even in our own mess.

The grand project of Julien Baker, as I have always projected it onto myself, is the central question of what someone does with the many calamities of a life they didn’t ask for, but want to make the most out of. I have long been done with the idea of hope in such a brutal and unforgiving world, but I’d like to think that this music drags me closer to the old idea I once clung to. But these are songs of survival, and songs of reimagining a better self, and what is that if not hope? Hope that on the other side of our wreckage – self-fashioned or otherwise – there might be a door. And through the opening of that door, a tree spilling its shade over something we love. A bench and upon it, a jacket that once belonged to someone we’d buried. Birds who ask us to be an audience to their singing. A small and generous corner of the earth that has not yet burned down or disappeared. I can be convinced of this kind of hope, even as I fight against it. To hear someone wrestling with and still thankful for the circumstances of a life that might reveal some brilliance if any of us just stick around long enough.

Julien, how good it is to hear you again. And now, in all of our anguish and all of our glory. I miss the way the outside world reflected myself back to me. Now, I make mirrors out of the walls. I am so thankful for a better noise than the howling of my own shadows. Julien, you have done it again. You expert magician. You mirror-maker. Thank you for letting us once again watch you maneuver through all of your pleasant and unpleasant self-renderings. If there is a future, there will be people in it who might not remember how this album came at a time when so many hungered for a chance to put themselves back together. When the imagination of a person, a city, a country, was expanding. When, despite all of that, in the quiet moments, there were people who still wanted to be held by someone they maybe couldn’t touch. Thank you, Julien, for this comfort. This glass box through which a person might better be able to see a use for their own grief. This kingdom of small shards of sunlight, stumbling their way in to disrupt the darkness. 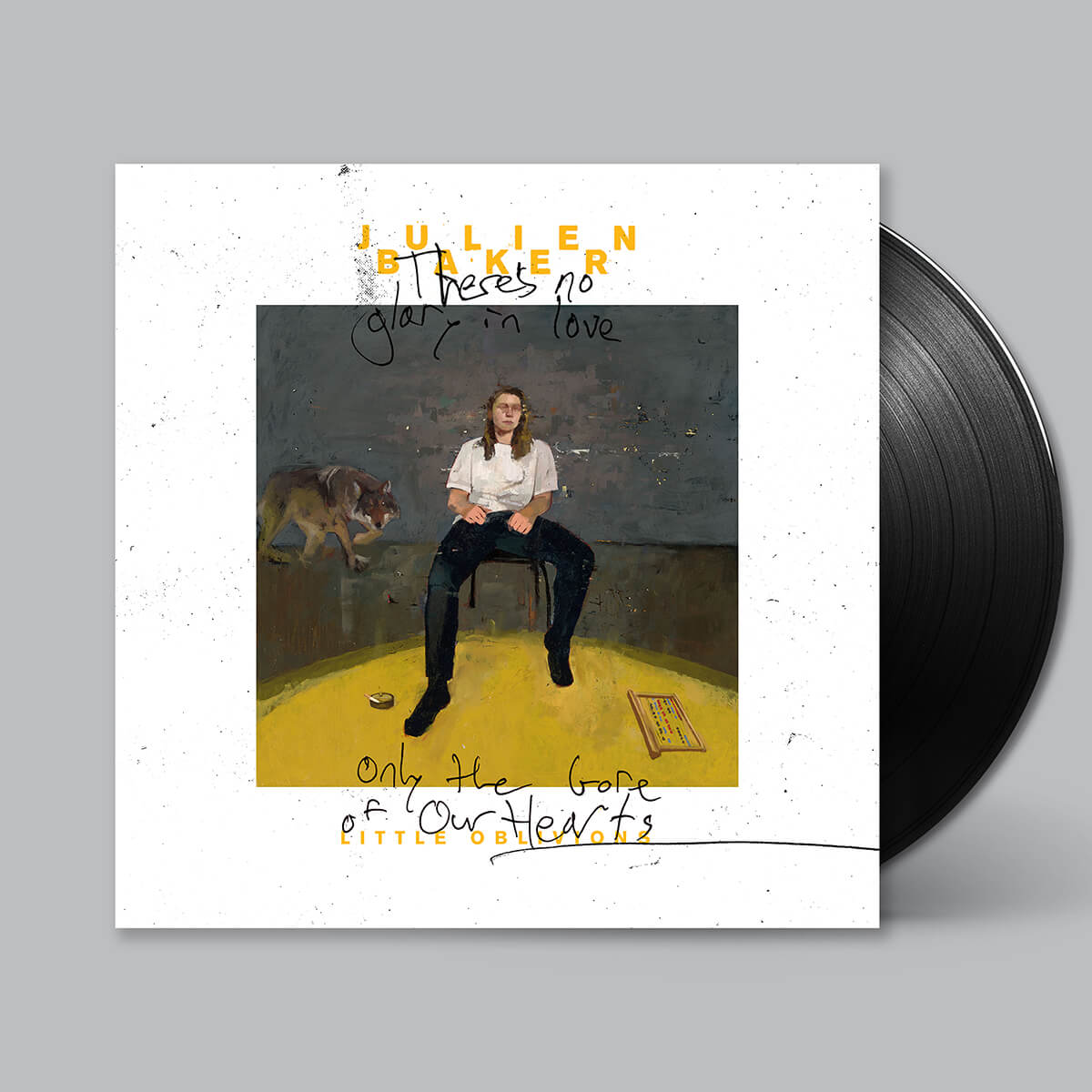 Chavez - "Break Up Your Band", "Nailed To The Blank Spot" live footage

"Break Up Your Band", live at PS 122
(courtesy Chris Wilcha)

More gold from the vast (?) Chavez archives, above.

The new Yo La Tengo EP, 'Sleepless Night' is available today on all streaming services and one-sided 12. 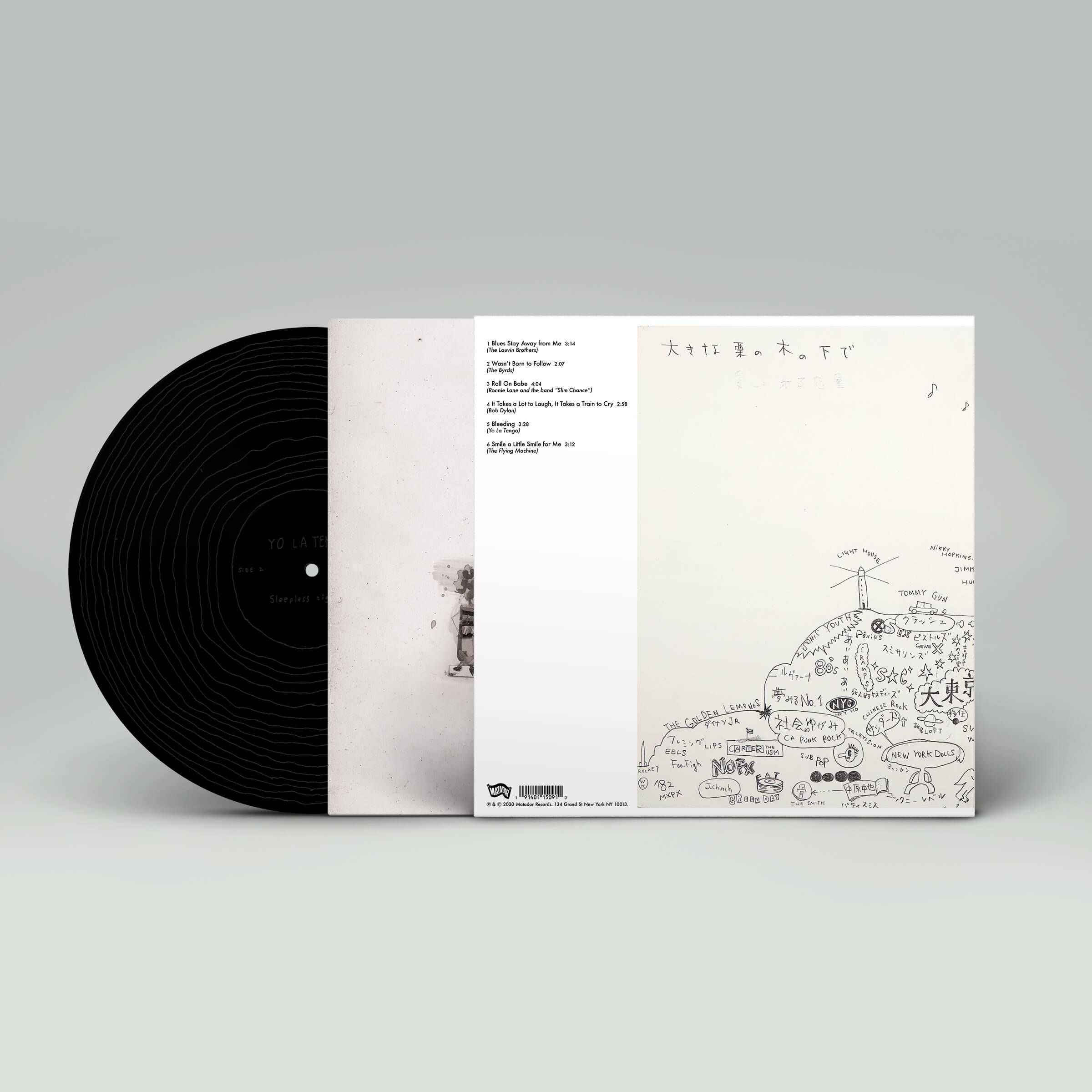 In addition, our friends at Japan's BeatINK have augmented Matador's Revisionist History Campaign with deluxe CD reissues of ‘Electr-o-pura’, ‘I Can Hear The Heart Beating As One’, ‘And Then Nothing Turned Itself Inside-Out’ and ’Summer Sun.'

The second episode of the 'Gone Glimmering' guitar tutorials, featuring Sadie Dupuis (Sad13, Speedy Ortiz) and Chavez' Matt Sweeney and Clay Tarver can be viewed above. 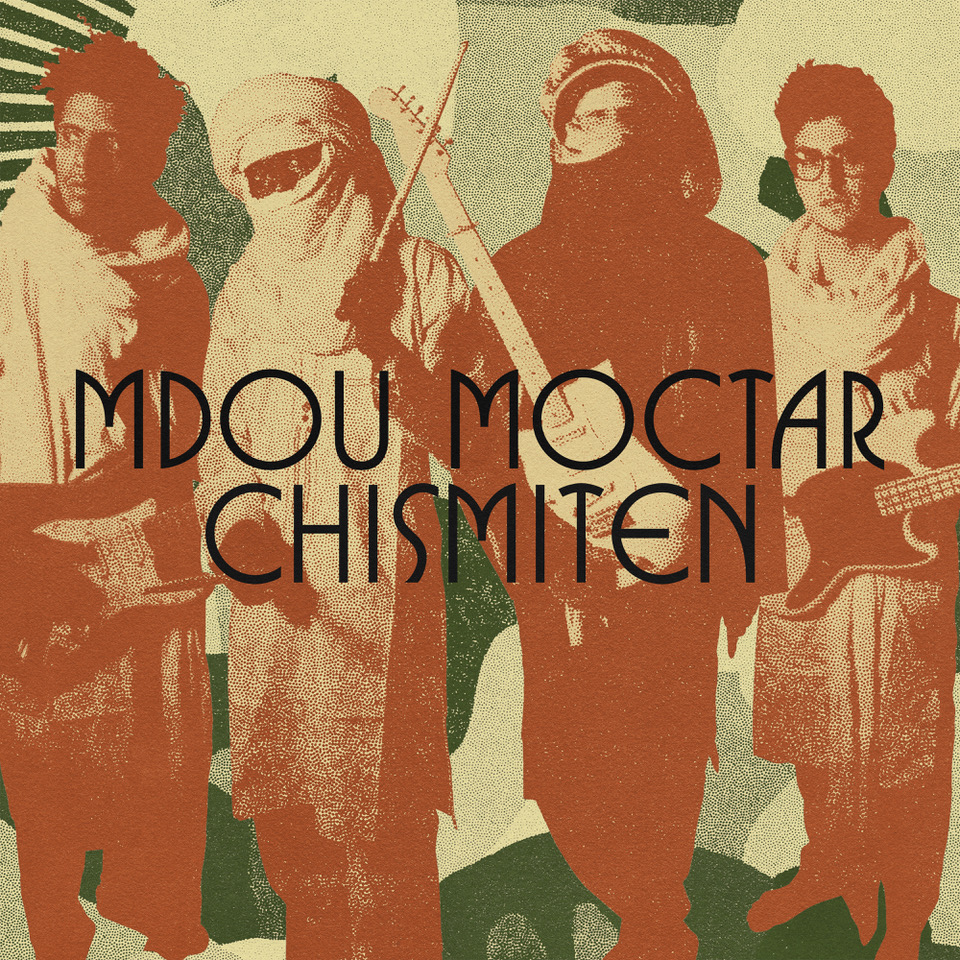 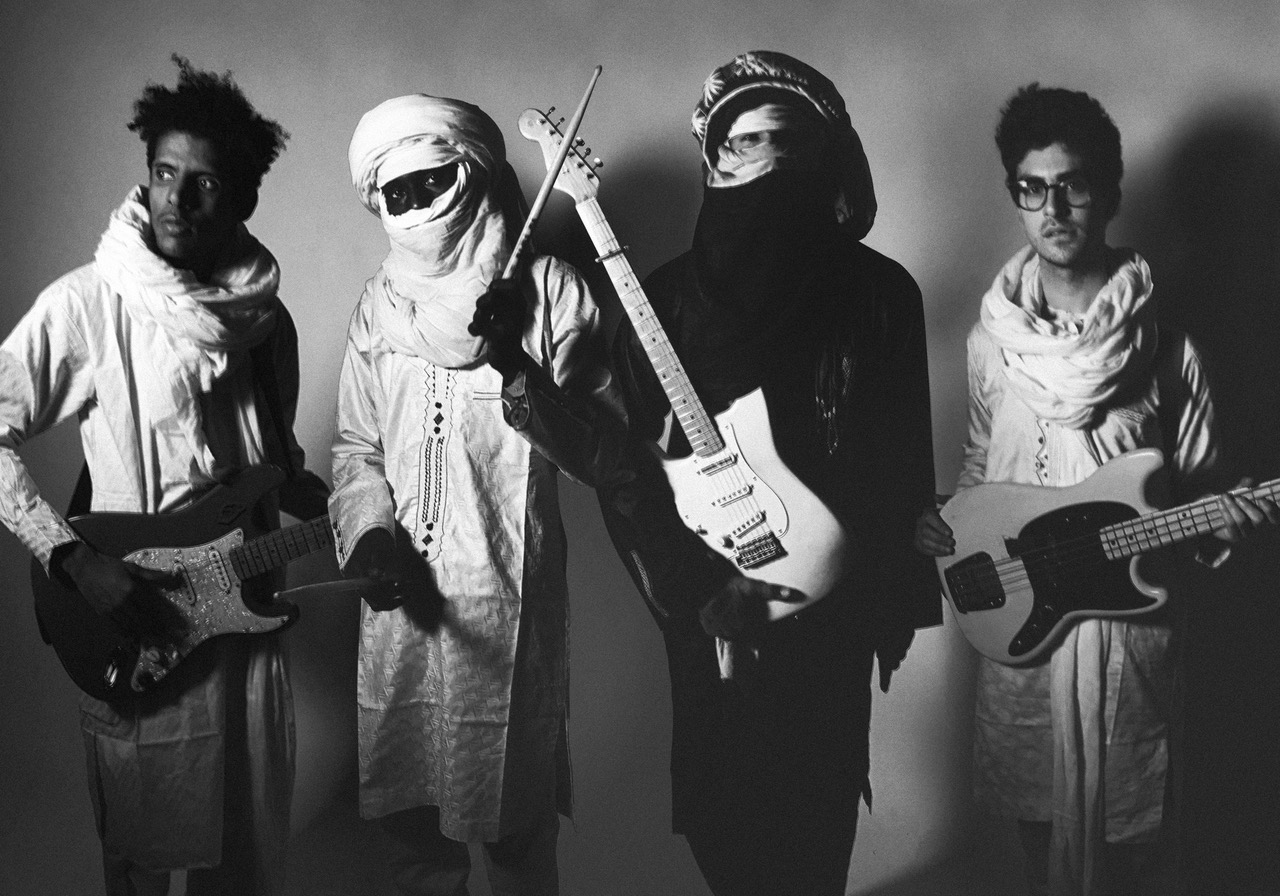 Matador Records is thrilled to announce the addition of prodigious Tuareg guitarist and songwriter Mdou Moctar to its roster.

A once-in-a-generation artist backed by an unstoppable rhythm section, Mdou’s music has roots in both traditional Tuareg melodicism and Eddie Van Halen’s daredevil majesty. Today we offer you “Chismiten,” the white-hot ripper that will kick off an expansive new full-length due to hit down next year. “The song is about how people in a relationship lose their sense of self, they become jealous and envious of others,” explains Mdou. “It is not about one specific person, but about all people in the world. I turn to Allah for guidance not to be that person.”

The song is accompanied by a video that blends illustrations by artist Robert Beatty with animation and cellphone footage shot in Niger, capturing wedding performances by the band, their friends and family, the markets in Niamey and Agadez, and the famous Agadez Mosque.

It’s possible that you’re already familiar with Mdou via his leading role in "Akounak Tedalat Taha Tazoughai", the first Tuareg language film – a retelling of Prince’s P"urple Rain". Otherwise, you may have spent time with last year’s monumental 'Ilana: The Creator' (Sahel Sounds), the guitarist’s first true studio album recorded alongside his live band. Indeed, it was this album and the band’s explosive concerts that brought them to Matador’s attention.

Mdou and his group – bassist and producer Mikey Coltun, drummer Souleymane Ibrahim, and rhythm guitarist Ahmoudou Madassane -- have toured ceaselessly throughout the world, evolving into a ferocious ensemble that can rock a Tuareg wedding as easily as they can scorch a festival stage.

At present, their live energies are unparalleled and their range immense, capable of evoking both the mesmeric boogie of Masters of Reality-era Black Sabbath and Black Uhuru’s sublime electrified grooves. “At our concerts we never talk about the music we are going to play, never write out a setlist, it's whatever comes to my head that I'm feeling,” says Mdou. “My band is always with me listening.”

This is all evident on “Chismiten,” where Mdou’s whirling riffs embroider and illuminate the band’s hypnotic grind, kicking up a noise that is at once elemental and undeniably transcendent.