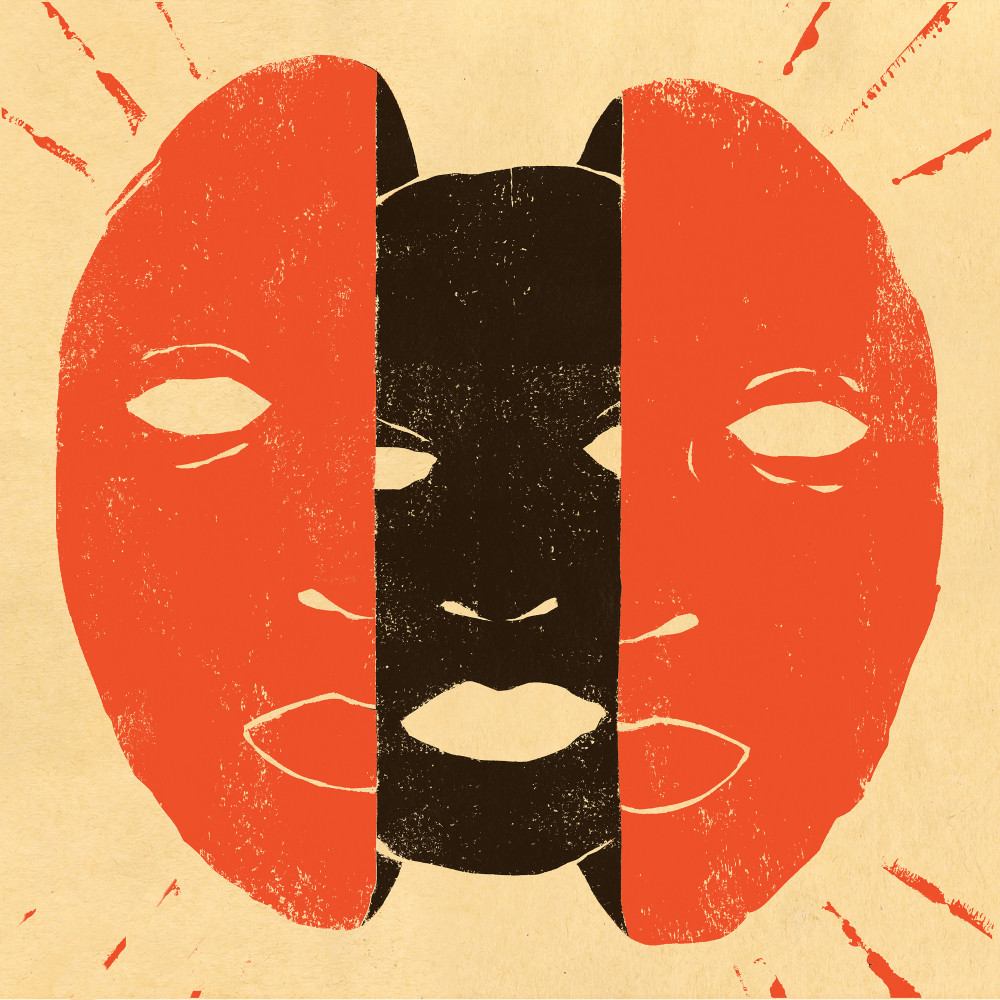 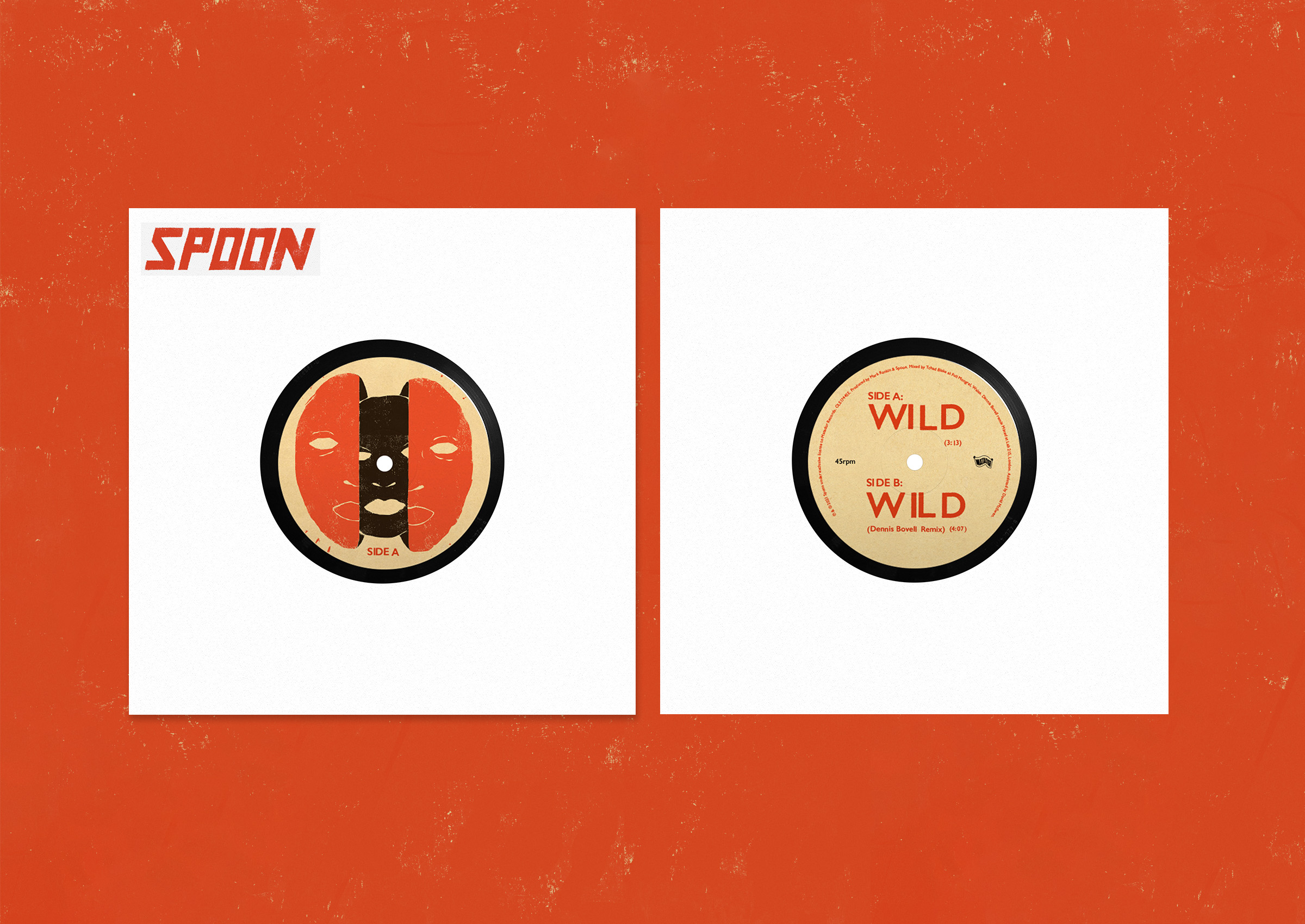 Spoon have announced an independent retail exclusive this December 10 with the release of a 7” for “Wild,” a track off their forthcoming studio album, 'Lucifer On the Sofa', out February 11th, 2022. The flipside is a Dennis Bovell remix of the single. This 7” will be the only way to hear these songs this side of the year. Additionally Record Store Day is holding a contest to win one signed copy of the test pressing of this 7”. Head over to recordstoreday.com to enter.

stream/download "The Hardest Cut"
presave/preorder 'Lucifer On The Sofa'

Save 25% on (almost) everything at the Matador webstore using code 'Matador25' through Dec 1. Otherwise, we might not have enough cash on hand to bring the guy above back to Earth.

Lindsey here - unfortunately, with terrible news this time. I’ve been struggling with my vocal health more and more each year. I lose my voice after a couple days of singing. I went to see an ENT last week and they found massive polyps in my vocal cords (surprisingly from vocal trauma due to talking!! shocker lol) that need to be operated on to prevent permanent damage to my voice. The recovery time is three months/speech therapy and in an effort to make sure the rest of the tour can happen, I will be postponing our first US tour which was supposed to begin this week as well as our initial UK/Euro tour :(. I’m devastated to be pushing off shows even longer.  My team is working overtime to reschedule everything that we're postponing--we will have everything rescheduled imminently. Thank you so much for all the support you've given the new record so far.

Due to the immediate need for vocal cord surgery, Snail Mail’s Lindsey Jordan has announced today that the 2021 US and early 2022 UK and EU tour dates will be rescheduled. The 2022 North American spring tour dates will go on as planned. All US 2021 tour dates have already been rescheduled and all purchased tickets will be honored for the new dates.

The UK and EU tour dates originally scheduled for February and March of 2022 are in the process of being rescheduled now and will be announced soon. All original tickets will be honored for the rescheduled dates. All 2022 North American tour dates will remain the same, kicking off on April 5 and hitting major venues across the country including Kings Theatre in Brooklyn on April 7, the Riviera Theatre in Chicago on April 14 and the Hollywood Palladium in Los Angeles on April 27. All dates are listed below.

Tickets are on sale now via snailmail.band.

The New Pornographers - "Letter From An Occupant" 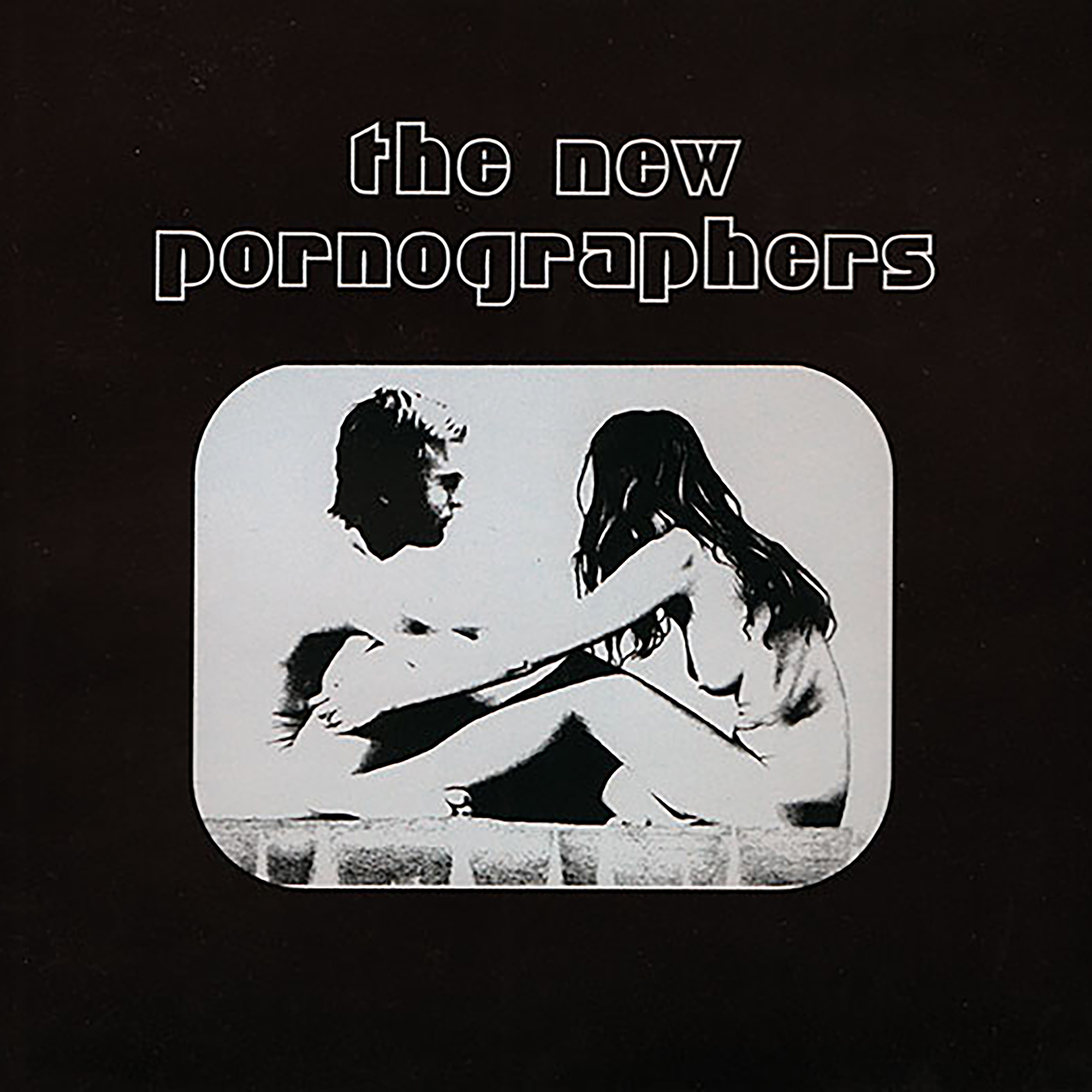 Stream the three song “Letter From An Occupant” single

The New Pornographers take Mass Romantic (and Twin Cinema!) on the road beginning next week. Link to remaining tickets and full itinerary below. 
Next month, Matador will honor the 10th anniversary of Fucked Up’s early ’10s masterwork David Comes to Life with a limited-edition lightbulb-yellow 2xLP reissue. That album –which clocks in at 78-minutes –may be as heavy a dose of genre-bursting progressive-psychedelic-hardcore punk brilliance as anybody can comfortably ingest at once.

But if we’re somehow underestimating you, there’s more. On March 25th, Fucked Up will release Do All Words Can Do, a nine-track compilation gathering David era-appropriate rarities and B-sides, all of which were previously available only on 7”. 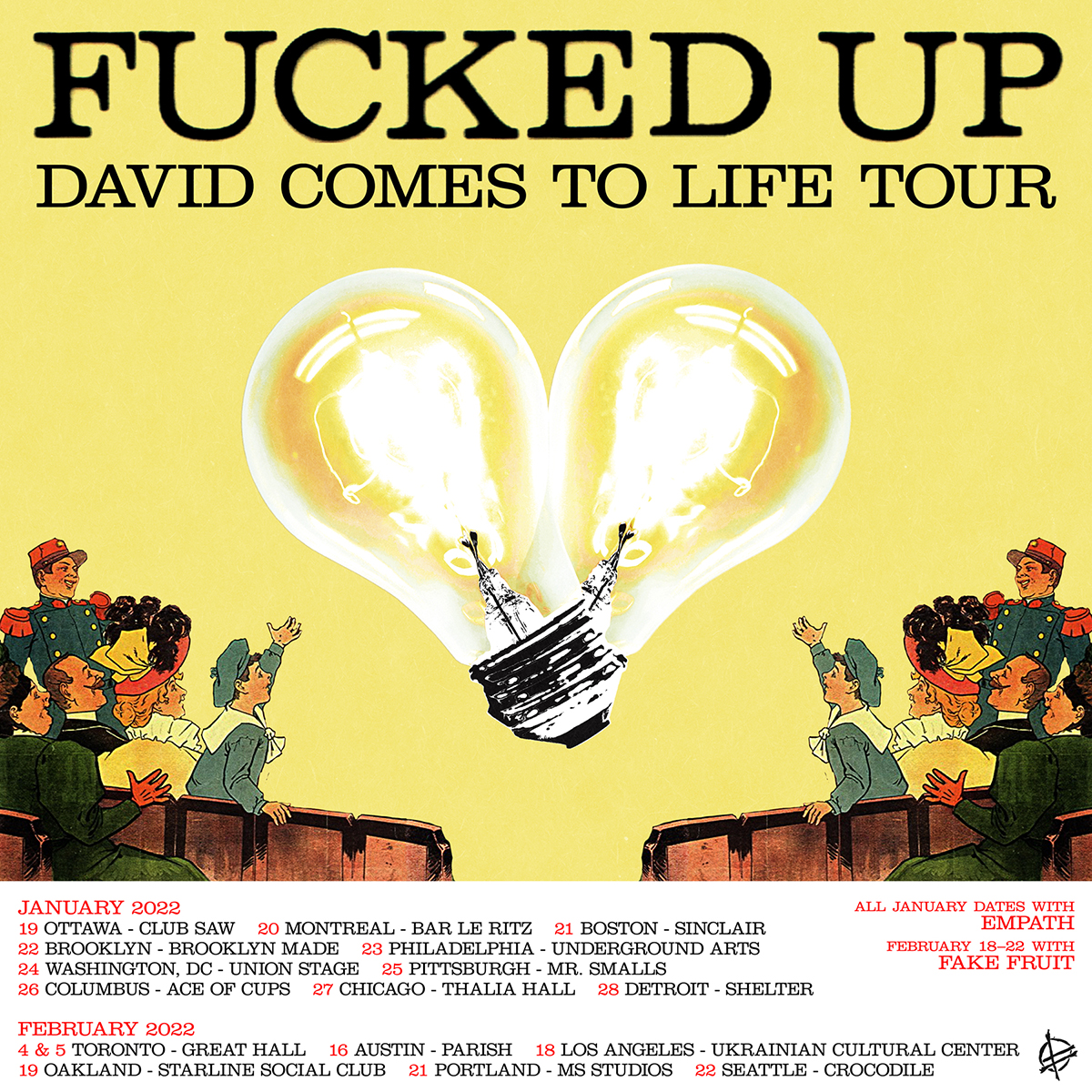 The band will also tour North America (East and West Coast dates) and the UK early next year performing the album in full.

Do All Words Can Do Tracklist
1. Queen of Hearts (Demo)
2. What Would You Do
3. Do All Words Can Do
4. Into the Light
5. Byrdesdale Garden City
6. What They Didn’t Know
7. The Truest Road
8. Remember Me
9. Octavio Made the Bomb 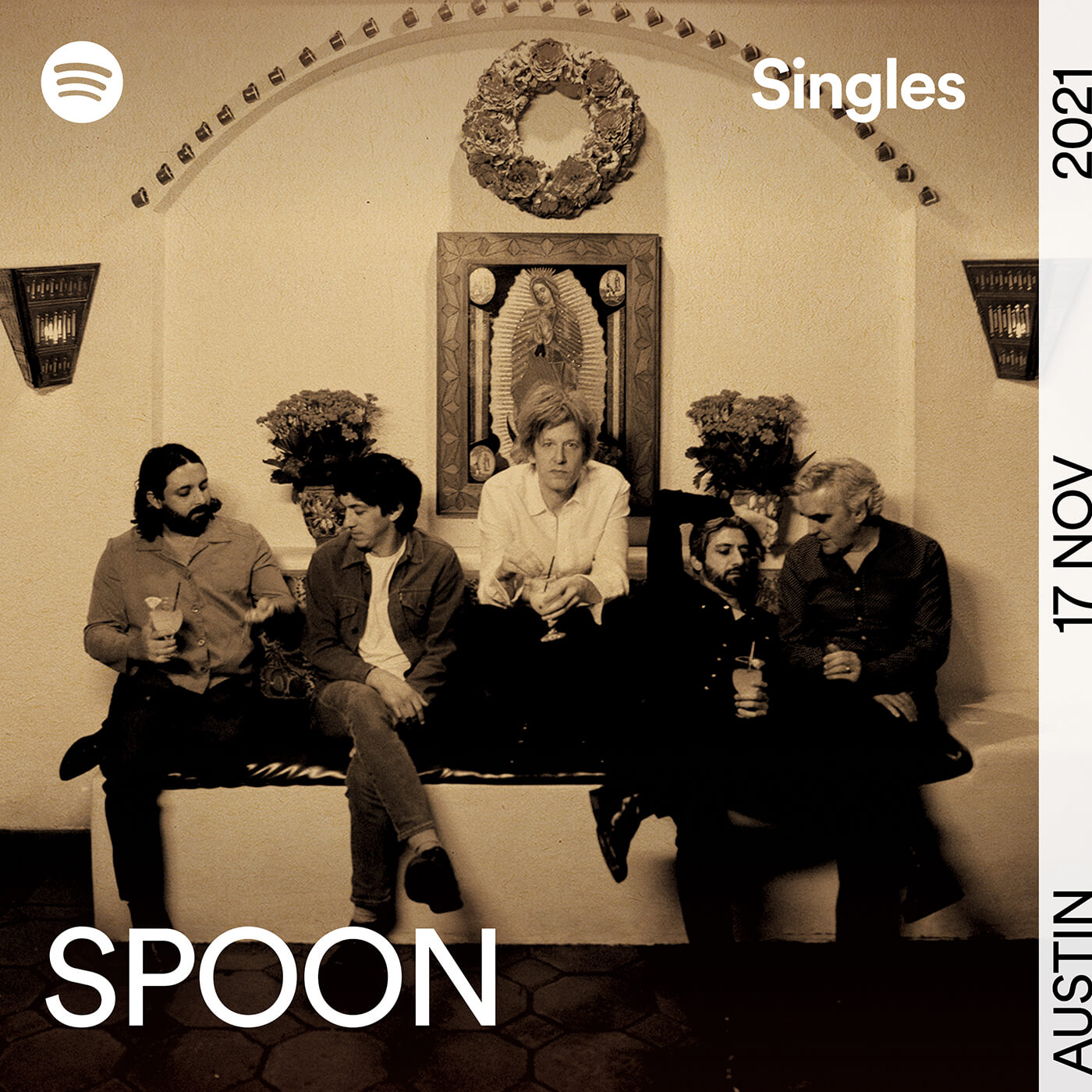 Pre-order Lucifer on the Sofa / Stream "The Hardest Cut"

Spoon has shared their take on The Beatles 1967 fan club single "Christmas Time (Is Here Again)" for Spotify Singles: Holiday Edition 2021. The collection marks the fifth year of Spotify Singles: Holiday and includes a wide range of covers and originals, from artists across a myriad of genres, in hopes of connecting friends and family from afar as they listen. Recorded at Jim Eno’s Public HiFi studio in Austin, frontman Britt Daniel says about the track, “Recording ‘Christmas Time (Is Here Again)’ was a group effort that pulled us away from rehearsals and quickly sent us down a turbulent path of what you might call the Christmas spirit. And it’s our song with the most band members doing vocals ever - pretty sure I’m counting four. THE WAR ON CHRISTMAS IS OVER.”

Spoon recently announced the forthcoming release of their tenth studio album, Lucifer On the Sofa, out February 11th, 2022. The album was co-produced by Spoon and Mark Rankin (Adele, Queens of the Stone Age) and features contributions from Dave Fridmann and Justin Raisen. It’s the band’s purest rock ’n roll record to date. Texas-made, it is the first set of songs that the quintet has put to tape in its hometown of Austin in more than a decade and bottles the physical thrill of a band tearing up a packed room. It’s an album of intensity and intimacy, where the music’s harshest edges feel as vivid as the directions quietly murmured into the mic on the first take.  According to frontman Britt Daniel, “It’s the sound of classic rock as written by a guy who never did get Eric Clapton.”